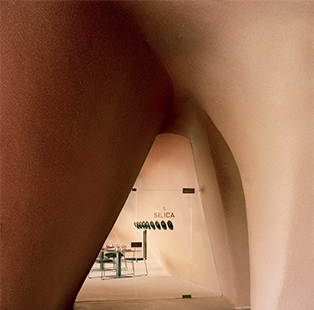 Inspired by the natural topography of the dunes and mountains of the surrounding desert, the sprawling Ayla Golf Academy and Clubhouse in the coastal city of Aqaba in Jordan, unfolds out into an organic, approximately 13,000 sq ft development. The 18 hole signature golf course, designed by athlete-turned-designer Greg Norman, is surrounded by residential, hospitality and commercial spaces that are conceptualised by Oppenheim Architecture to connect the built environment with the natural. The design practice is influenced by tribal Bedouin tents as seen in the final construction. Conventional walls and ceilings resemble curved shotcrete shells, creating magnificent triangular entrances between the folds.

Built in a hue that echoes the warm shades of the enveloping Aqaba mountains, every single structure that makes up the academy and clubhouse captures the elemental vibrancy of the rolling desert landscape. To tackle extreme weather conditions, a Corten steel perforated screen is fitted—similar to the traditional Arabic mashrabiyya (windows enclosed with carved wood latticework)—to allow sunlight to filter in. This seemingly delicate yet sturdy structure includes subtle sustainable elements. Take, for instance, the building that houses the academy. It features an open air lobby, circulation areas, insulated roofs, cavity walls and double glazed windows to induce cooling and eliminate the need for air conditioning. The architectural rm also worked with a local artist, whose plan of a raw, adorned look is achieved by applying a traditional pigmentation technique to interior spaces—perfectly emulating this leisure destination’s inspiration. 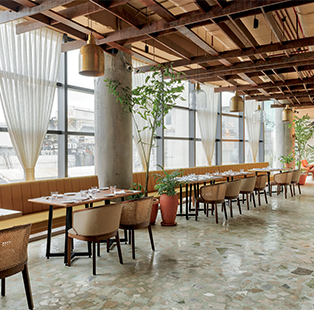 To increase the eatery’s resemblance to a greenhouse, Bhatt used natural materials along with furniture upholstered in organic shades of mustard yellow, rust and green. The highlight of the space is the Venetian terrazzo flooring that was cast on site with marble and stone pieces set into situ. Bringing in a tropical vibe is the botanical print wallpaper, which is illuminated by custom made pendant lamps in the private dining room. Meanwhile, a long running couch along the courtyard side facade and a metal and tarnished mirror screen near the bar lends visual expansiveness.