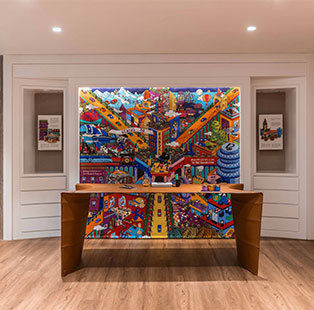 In an effort to change the future of jewellery design in the country, Vandana Jagwani has launched Vandals—India’s first laboratory-grown diamond jewellery store. Designed by Ayesha Puri of Sanjay Puri Architects, this Bandra store showcases a seamless collaboration between art, design and technology.

As we enter the store, we’re greeted with shutters wrapped in customised vinyl using colourful text against grey and white multidirectional stripes. The word ‘Vault’ is etched using an antique pixelated video game font to add a playful element. A number of pop art elements juxtaposed with plush furniture and console tables create the perfect balance between the forward and classical thinking that the brand stands for. An enchanting quote by Banksy encapsulates the concept of imagining a city that turns dreams into reality, where no one is bound by limits and everyone evolves to redefine the future.

Meandering through we see a custom wall mural hangs behind the futuristic leather-clad metal desk and opens up to display the jewellery. Puri worked closely with graphic designer Heta Bhuta of Slaate Co to create this unique piece of art, hand painted by local artists on to an automated canvas screen. A mezzanine floor is screened off from the bottom level with a curtain of metal rafters that turn around. Suspended art hangs in front of the screen, designed by Ayesha and Vandana to showcase an amalgamation of old techniques with new ideas.

A hand painted piano sits amidst four multicoloured jewellery shelves, while a custom Bang & Olufsen speaker is treated as a canvas for graffiti inspired by street art. A million green and pink polka dots are seen in the cashier zone to symbolise the non-existent limit to a person’s ideas. As we exit the store through the elevator, the doors read “exit through the gift shop” on a paint-splattered back. 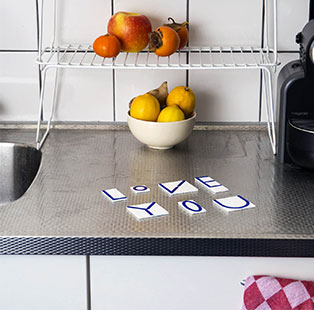 OMG! BRB! LOL! I love how the usage of letters portray the world we live in. For the Galapagos Game, I looked at handwriting and wondered if there was an underlying system. From this, I derived nine basic shapes, using which all letters can be formed. The first sketches were simple paper cut-outs. To test if they were attractive to others, I asked my children to play with the basic elements. When they started to draw houses and faces, I realised the shapes were not only great to write with but to scribble, draw, create patterns, build and invent. The game is all about combinations and possibilities within a visual system. Named after the Galapagos Islands that are home to a vast number of unique species, the game encompasses a range of characters and forms that keep evolving. It is a framework that supports auto-didactic activities, operating under the dynamic Montessori approach to learning. Based on principles of self-study, it encourages the joy of discovery and creativity. The pocket version of the game is made of 54 building blocks, printed with nine different geometric shapes that can be laid out to form endless combinations of letters, words or more abstract artistic expressions. The game can be seen as an efficient way to study the alphabet. Moreover, playfulness, creativity and productive use of time ensue, whether you’re alone or in the company of others – defying all conventional laws of efficiency.