; A serene farm house by Alter Architects by the Mahisagar river blurs boundaries between its indoors and outdoors - ELLE DECOR 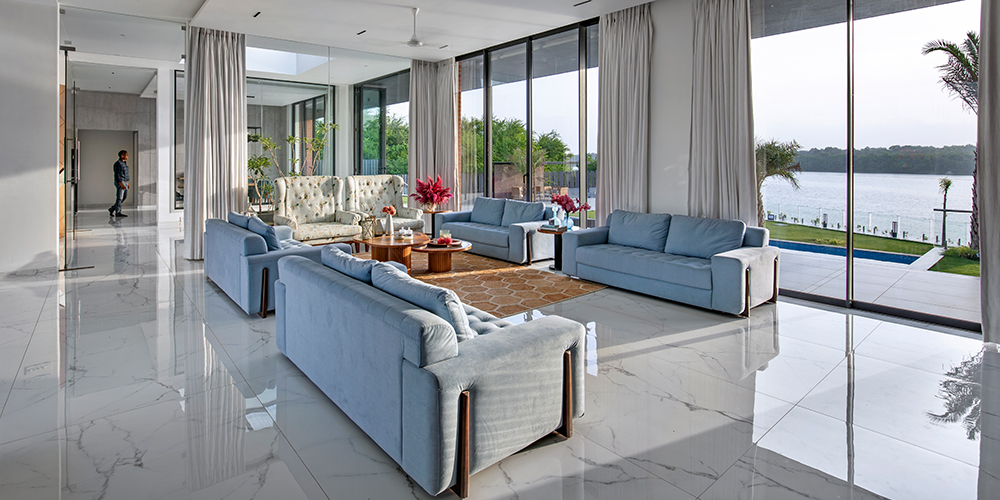 Be Komfort sofa and chairs alongside curtains from Aavaran impart a plush softness to the white backdrop accentuated by Tisva lights; Photographs by Tejas Shah 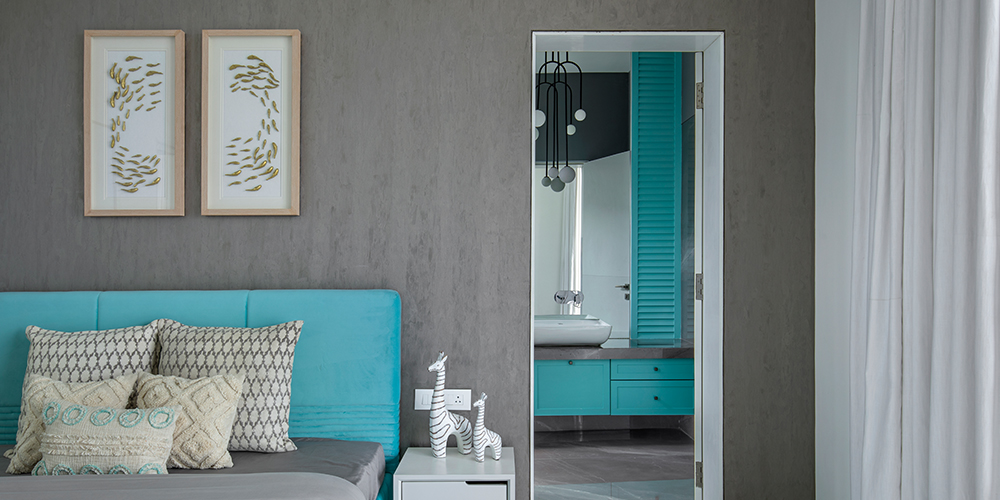 Greys are used to break the monotony of whites as curtains from Khandelwal Furnishing add a tactile softness to the wall that is adorned by artwork from Harmony Arts; Photographs by Tejas Shah 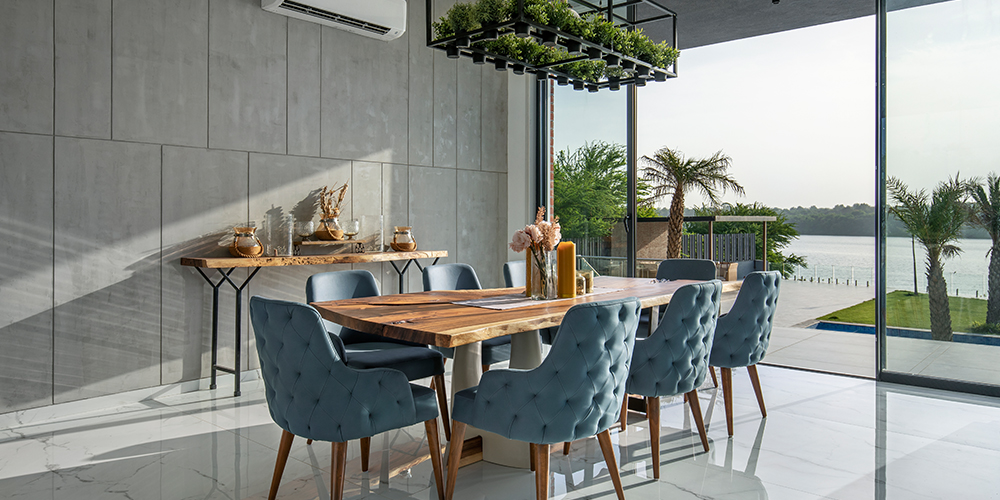 A live edge dining table from Olvvi Lifestyle and tufted chairs and console from Be Komfort is a pleasant departure from the minimalist scheme as it adds a slight contrast to the whites that prevail throughout the house. A locally customised lamp mirrors the abundant greens that is seen in the outdoors; Photographs by Tejas Shah 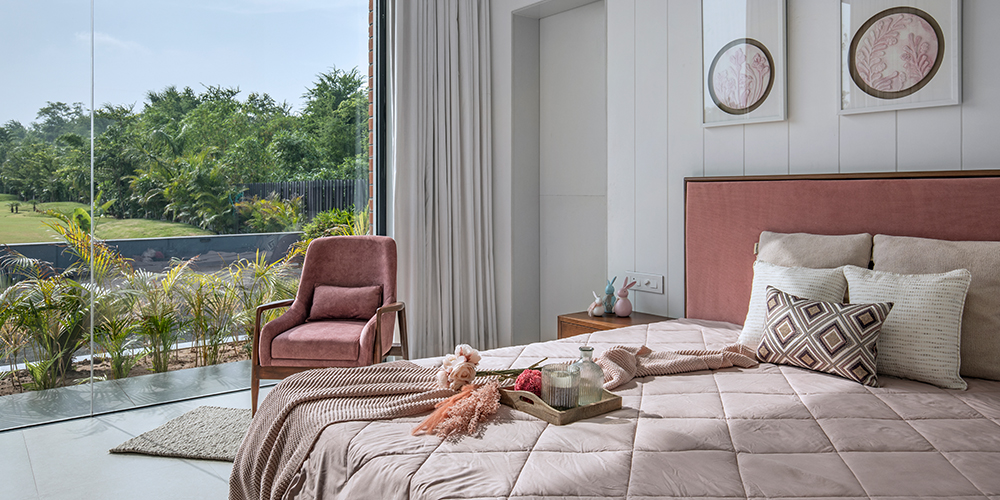 Pretty as a picture in pristine pink, the chair is procured from Be Komfort while the wall art is from Harmony Arts and the bed is made on site; Photographs by Tejas Shah

Framing picturesque views of the Mahisagar river in Kotna village, Vadodara, Alter Architects have designed this farm house to celebrate its stunning precinct and lush outdoors. Built as a second home, its dwellers aspired for a minimal, elegant and relaxing home that established a strong connection with nature.

Chitra Sindhkar, principal designer at Alter Architects alongside partners Aditya Umrajkar, Parth Patel and Shil Shah have deployed shades of white and blue alongside monochromatic hues and play of subtle textures. The 4,500 sq ft home involved zilch structural changes as the designers received a bare shell of a structure work upon. 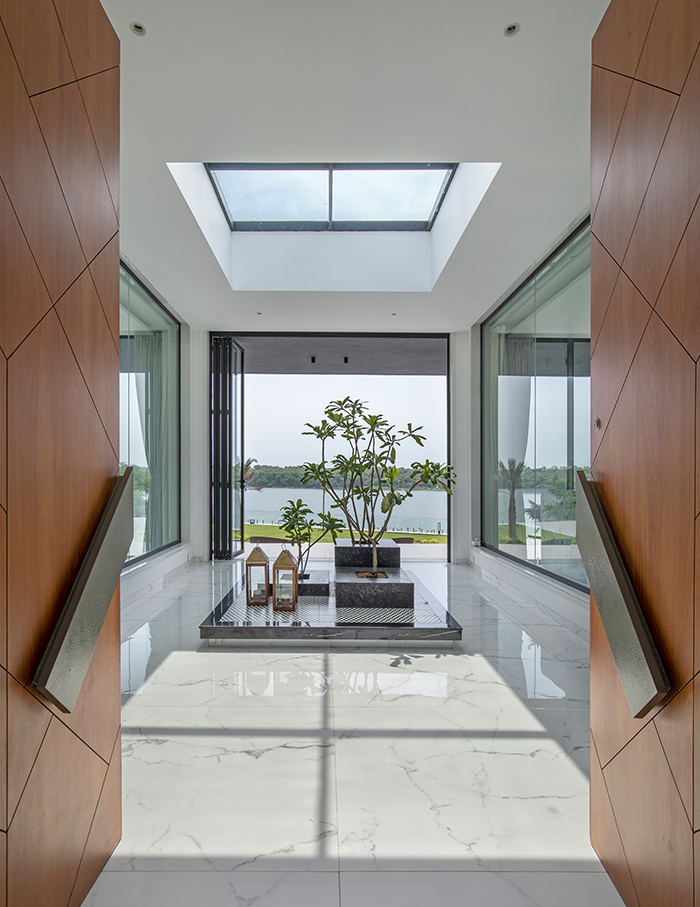 A grand main door welcomes the user into the house as they are faced with a courtyard offering views of the river. With a cutout in the ceiling that brings in natural light, the entrance is planned as a series of framed vistas to craft a spatial and visual relationship with the river.

Furthering the indoor outdoor narrative is the living room with its tall windows overlooking the serene waterbody. The beautiful blue of the river is mirrored by the sofa to recreate a tranquil treat for the space.

Explaining the rationale behind the play of monochromes with just a hint of colour, Sindhkar explains, “We chose to keep the background subtle with white floor and ceiling to enhance the colour of furniture and invite nature to become the hero of the space. Grey is added to break the monotony of white in a few areas.”

Breaking away from the minimal mood is the bar with a vivid and colourful vibe. The bar counter stands atop a raised black floor cocooned in a corner. Endowing an exquisite backdrop is the panelled wall with veneer finish.

A custom made kitchen yet again provides an unobstructed view of the outdoors. The island counter allows the user to either engage with an audience if they choose to work facing indoors. Conversely, it also offers the option to work facing the window and enjoy a moment in solitude.

Small in size but large in details, Sindhkar mentions that bathrooms are not only the most important part of the house, but also the designer’s favourite.

“It is said that a bath is the place to wash your worries away. One spends significant time in the bathroom. The most challenging part was to stick to the budget and play with materials to bring out the best in the space,” says Sindhkar.

And rightfully, the bathroom is where much design revelries transpire. The visual language deviates sharply from the expansive whites and turns to play of textures and colours with an emphasis on lighting accessories. 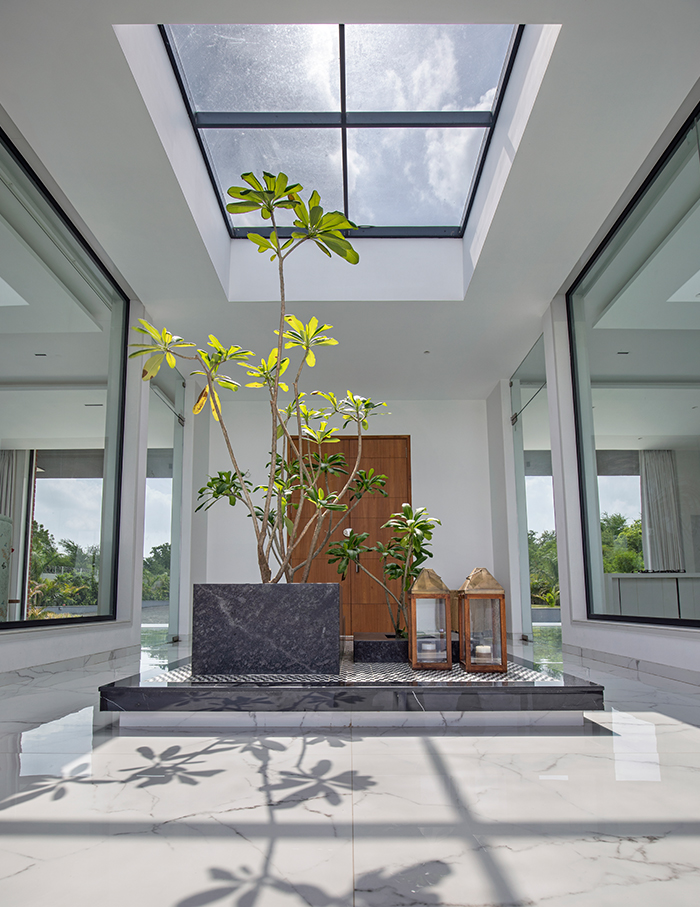 But the true hero of the project is not its manmade features nor nature. It is the in-between spatiality of the indoors and the outdoors. The design captures nature and brings it indoors to the dwellers. At the same time, the home with its massive openings places its users right in the lap of nature.

While the home fulfils its homeowners requirements of minimal elegance with understated luxury, it is commendable that the designers not only brought to fruition the clients desire of a second home but also elevated it a notch higher.

If you liked the indoor and outdoor conversation in this farm house by Alter Architects, something tells us you will love the Linear House by Rohit Bhoite which makes the most of its verdurous environs.