; Sentiment of longing with a view of the skyscrapers at this Mumbai duplex

Within a tempting tussle of daylight, shadows, sea views and hues of wood, a sentiment of longing captures you at this Mumbai duplex imagined by Mangesh Lungare 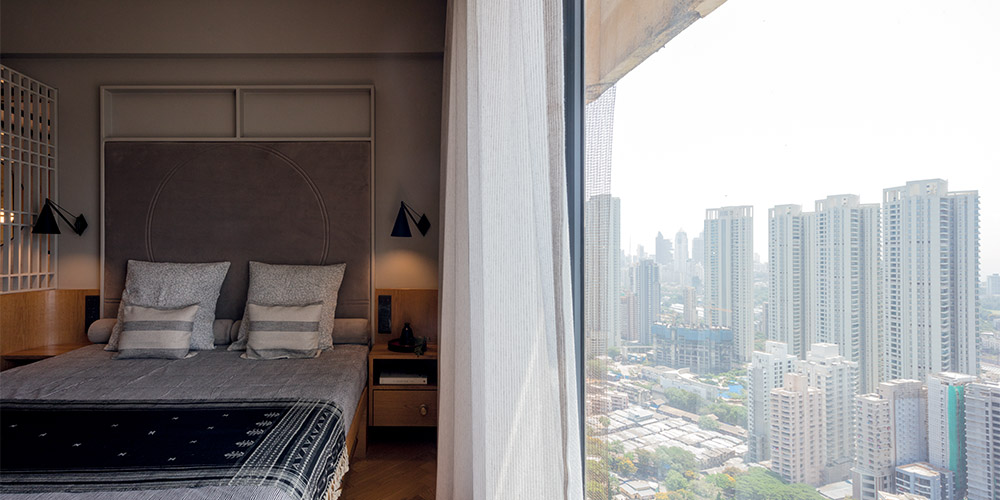 WADI09 light that won the EDIDA 2020 accolade sits on a glossy pedestal; Muted, earthy colours balanced by furnishings from The Pure Concept Home create a cocooning effect in the primary bedroom; Photography by Pankaj Anand

A mammoth bed of the Arabian Sea sparkles as the glinting sun rays hit the fluid water. While the rows of skyscrapers wrestle for attention with the endless skyline, a flock of cars dance on a certain highway, skirted with the famous racecourse and windborne scenes of helicopters flying in and out at the helipad in distance.

This and sundry more views are afforded like a scene right out of a movie, from the window (read: the grand balcony) of the magnificent duplex in the southern stretch of Mumbai.

The director and the writer of this absorbing script that shaped into the first home for a family native to Rajasthan, is Mangesh Lungare, an interior and architectural designer whose only canvas of choice for every project he undertakes is a certain newness not realised before. This 3,000 sq ft residence shifts the spotlight from the standard debate of functionality and habitability to how thoughtful design possibly holds the ultimate dominion in living that ideal, elevated lifestyle.

Roosted up on the 40th floor, levelling up with the tall buildings in the neighbourhood, the duplex right from the clucking open of its doors, unwraps into a narrative of ‘wows’ and surprises – something I like to call as the labyrinth of perceptive designs witnessed at every step of the way.

Commingling with a clean palette of stone, marble and wood, a mood-indulging burst of soft colours splatters across the house. Parallely the unleashing drama of sunlight blankets the walls and dances on the floors of the space. Laddering from ground to the first level, the home unfolds into an exciting yet effortless layout.

The entryway navigates to a sweeping living room and an extended deck starstruck with the incessant views of the cityscape.

This is where evoking moods of warmth, consonance and solitude continue to brew day through night, almost like the walls serenading the dweller with a hymn of comfort. Gaze up and eyes race to the first floor where a smartly carved lounge zone sits leading inside to the parents’ bedroom, kids’ bedroom and a study area.

A jewel of sorts, a stunning spiral stairway in warm tones of timber stands poised as a modern iteration of a castle-esque stairway, underpinning the home to be as grounded as it is extraordinary in its interiors.

The living room flows into a demarcated dining zone that hosts an extendable dining table, chairs and a bench custom made in-house. In fact, a majority of the furniture and lights come tailored from Mangesh’s product design brand Wadi Design Studio.

A statement and defining character of this sea facing den is also the unmissably statuesque wall artwork that Mangesh and his solid female-led team ideated from scratch. “When you’re on the 40th level, the contrast is to bring nature into the house because you’re so far away from it. This is where the idea seeded from.” Mangesh was quick to suggest to the family to coalesce the culture and crafts of their native city Jodhpur with the tropical essence of Mumbai.

The colossal art, which took about three months to materialise, finds liberal influences of the mangroves, hornbills and kingfishers, monkeys and spirally clouds, contoured with a rustic, raw finish—because when was nature ever synonymous to perfection? “I love botanical prints because they have a great depth to it.

They are realistic but also artistic,” divulges Mangesh. The secret to such sublime design that lingers on in memory long after your interaction with it, births from the rapport that Mangesh shares with the homeowners. To which he agrees, too, recognising this bond as a definite ingredient to good design.

“In practice, we always work around what or who we are building the house for. I like to know who I am doing it for, what is their chemistry, action-reaction, liking or disliking with a particular genre or design language. And then everything moulds according to that.”

A precursor to design while weaving the walls and boundaries of a home, is planning and fitting the various sections of the space seamlessly as one.

Mangesh reveals, “Everything has been remodelled here, going beyond the typical layout of the builder. When it becomes a family home, every individual has their own demand. It’s exactly like why we all wear different clothes. We could all actually wear a uniform, but how we style our own body and our own attitude is exactly what making a home is like.”

The journey of reshaping concrete and bricks into emotions of comfort and homeliness is what this duplex recites. That’s where Mangesh’s approach to design finds semblance, “My design philosophy is to not have a preconceived idea. It’s like doing a painting. You don’t have anything in mind about it, you just go about it and that’s how design evolves.

You may also like: This Neoclassical-inspired farmhouse designed by UnBox Design