; Traditional Affinity by Thought Parallels moves away from urban edifice 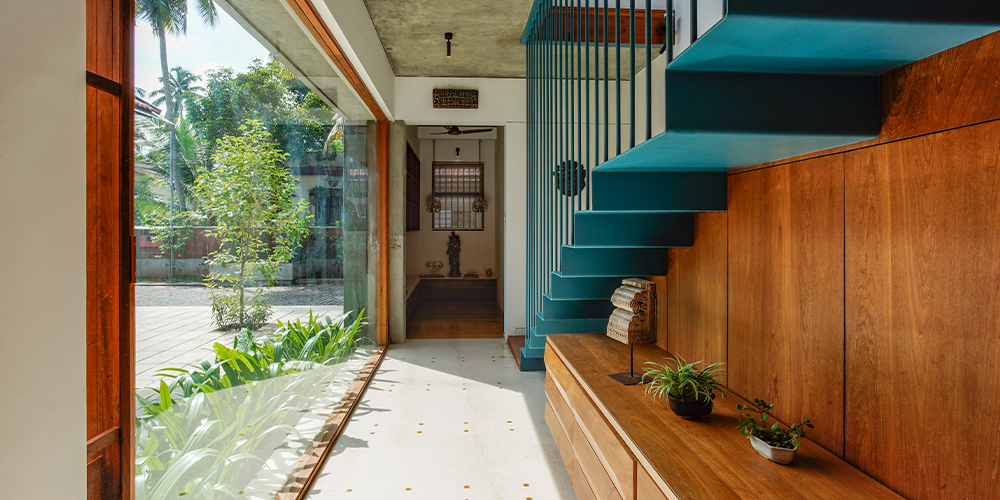 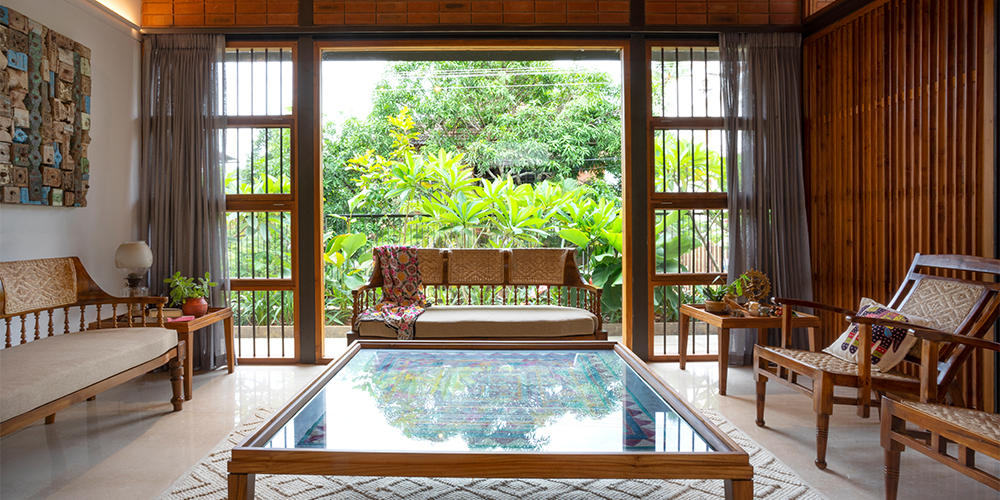 The living room opens up its bi-fold doors to nature; Photographs by Ashik MK 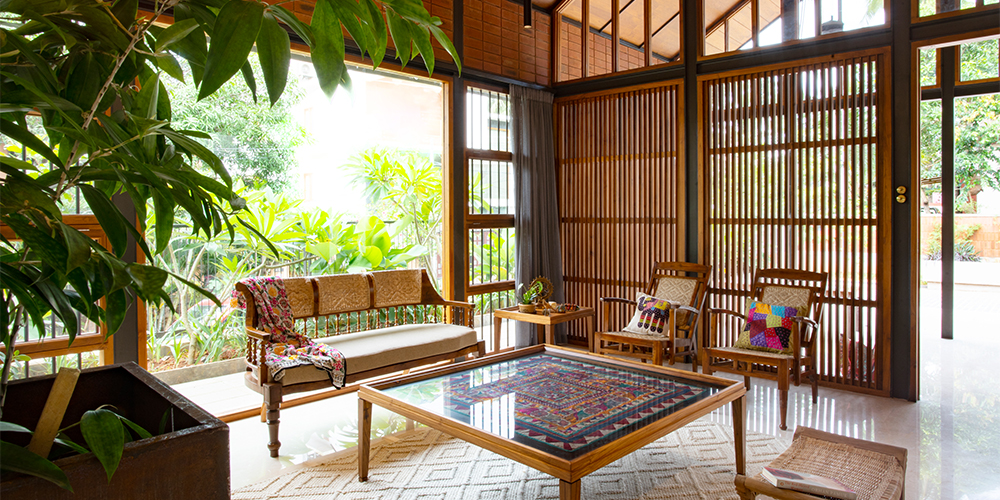 Elegantly weaved tapestries act as a glass inlay for the centre table; Photographs by Ashik MK 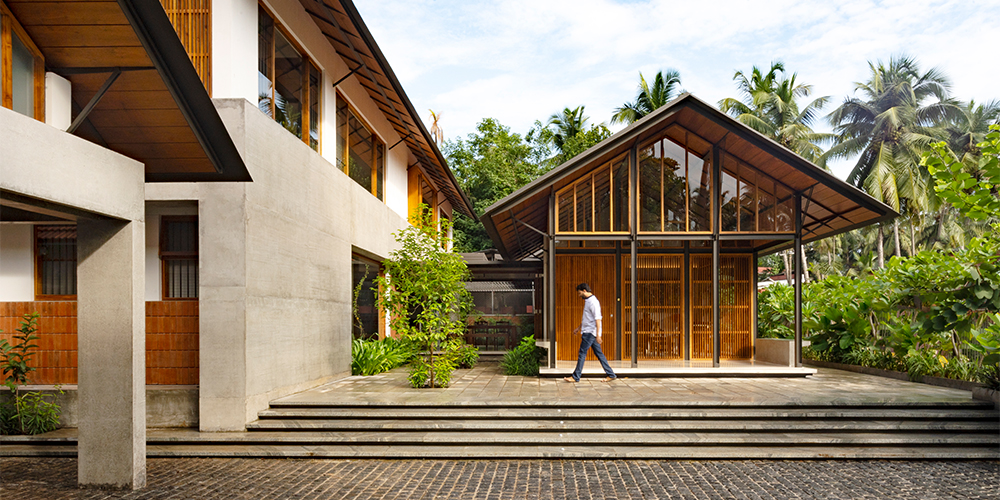 Raised on a minimal platform, this traditional house cocoons itself amid rich flora; Photographs by Ashik MK 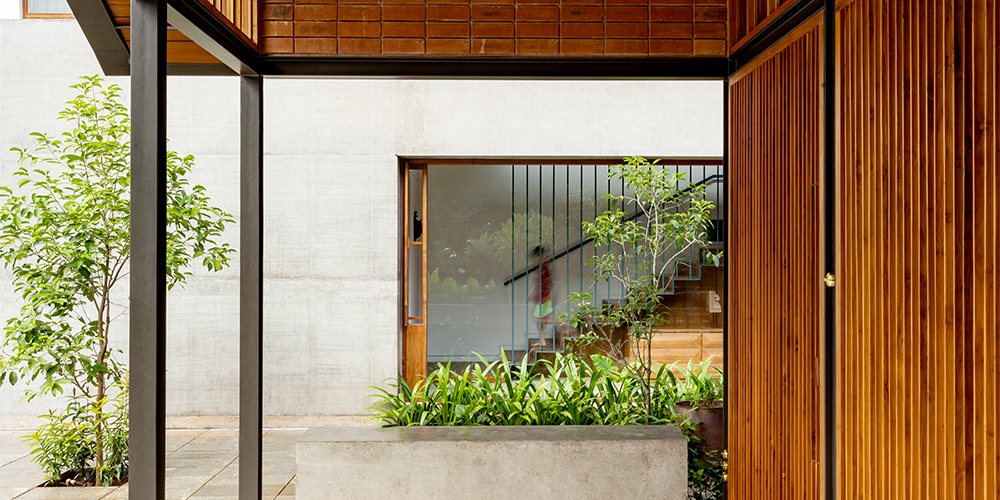 View of the indoor staircase, which adds colour in this earthy home; Photographs by Ashik MK 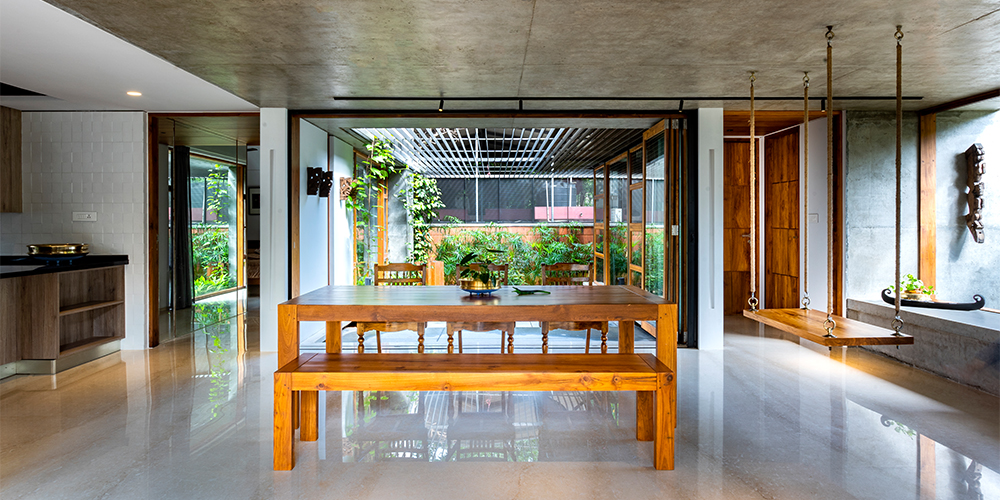 The central dining area connects both communal and private zones of this H-shaped house; Photographs by Ashik MK 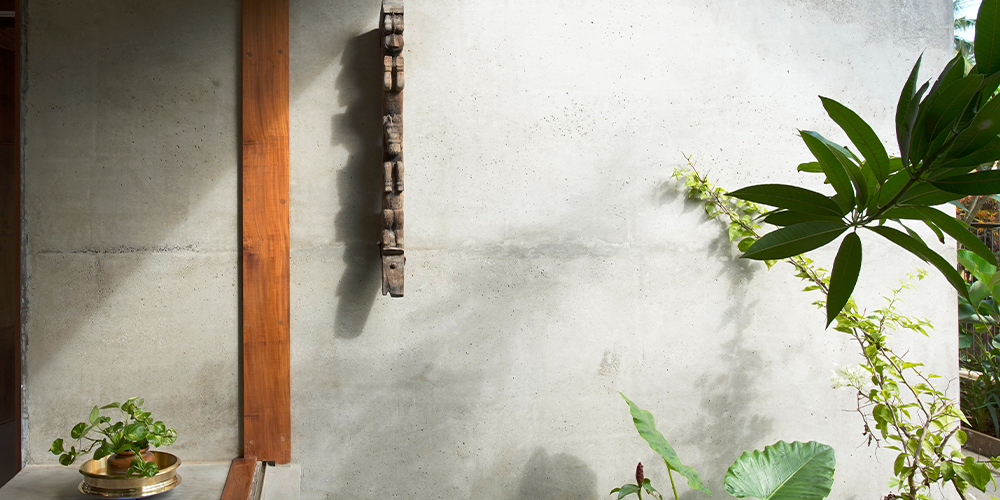 Every part of the home seamlessly connects indoors with the outdoors; Photographs by Ashik MK 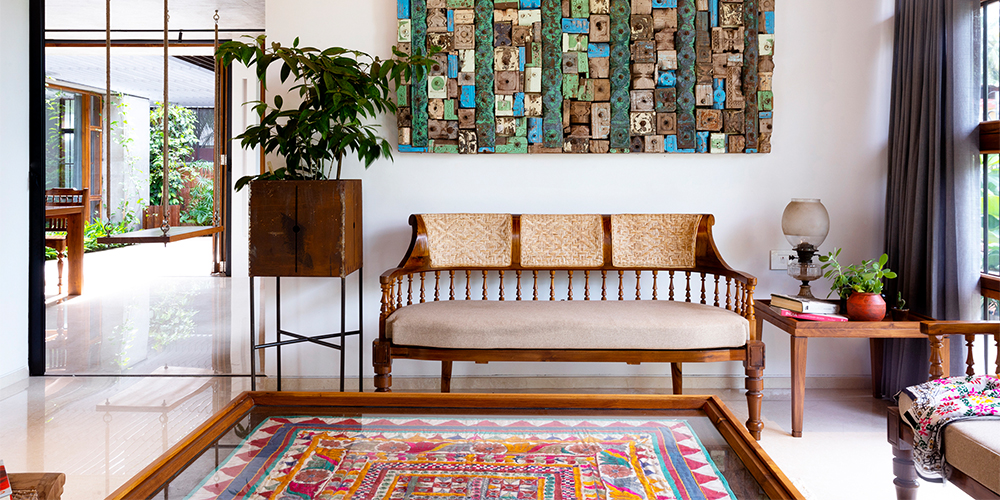 Traditional teak furniture and vibrant artworks are seen in the living room; Photographs by Ashik MK

Extracting essence from the traditional science of houses and explicating it in a contemporary style, this 3,500 sq ft project titled ‘traditional affinity’ by Thought Parallels Architecture remains grounded to its roots.

Tucked within a private paradise of nature, this house in Kerala is a living example of harmonious design typology. It features an H-shaped layout, wherein the two arms are connected by a central dining space that breathes ventilation and conversations into other areas.

“We created this home for a family of four who moved back from Bahrain to their native town. The client’s brief focused on designing a home that has an affinity to its traditional roots,” says Nikhil Mohan, principal architect of Thought Parallels Architecture.

The open-house plan intersperses the public areas of interaction with the private living and working zones. The linear horizontal lines of the abode are juxtaposed with light sloping steel roofs, dressed in terracotta tiles, adding a vernacular character.

While patios and verandas in the central space take advantage of the tropical climate to enjoy rains, the large overhangs of the sloping roof combat the heavy monsoons. The edge design of the roof is customised to emulate a chiselled aesthetic.

The spacious living room is dressed in Jaisalmer stone flooring and furnished in traditional-style teak furniture. Walls are cloaked in white and highlighted with colourful tapestries (one is even used as the centre table inlay). The essence of infinite space reflects across the home as spatial boundaries are blurred and its glass facade offers interaction with resident foliage.

“The dining space opens up from all four sides and serves as the lungs of the house. The semi-open kitchen and dining area were quite challenging to design since they connect both arms of the home. We created a large opening for immense light to spill in and placed bi-fold doors on both sides for effortless transition,” shares the practice’s partner and creative director Shabana Nikhil.

This single storey structure on one end is accessed by a single flight, folded plate steel staircase that coalesces with the visual lightness of other design elements. “It is finished in a shade of calm blue and suspended with the help of rods from the beam support,” adds Nikhil Mohan.

One of the three bedrooms is accommodated on the ground level, while the others are on the floor above. Each is furnished using teak and draped in soft fabrics. The sloping roof leaves expansive room for light and ventilation, so the space is well-equipped with sound, heat and water insulation.

Blue-hued fabrics are matched with throw cushions with traditional designs to enhance the colour palette of the bedrooms. The gable profile is ornamented with teak frame, while a pendant lamp is suspended from the high ceiling.

Partly, the wooden fins panel provides privacy while the upper half draws plenty of light into the bedroom. The rooms are strategically placed to dwell upon lush green views.

Apart from the bedrooms, the upper floor also houses a small terrace. It is protected by a blank wall on the south facade to cut the harsh rays of heat. It is covered in a sloping roof, installed with solar panels, making this house responsive to the environment.

The outdoor areas are covered in limestone flooring against an exposed concrete and terracotta backdrop while being embellished with greens. Away from the urban pod, this house redefines luxury in its quality and experience of spaces while truly holding on to its local vibe.