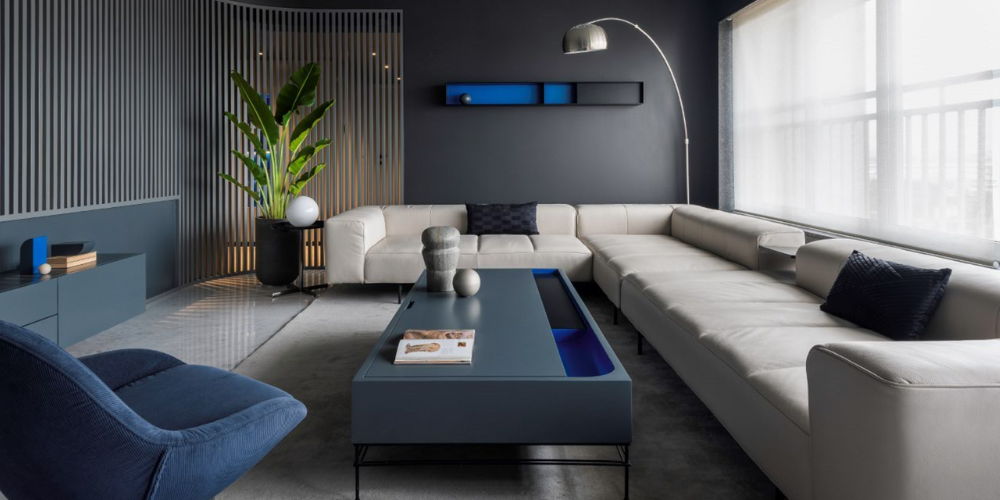 A cross sectional sofa in the living room marks the ample length of this linear space; Photography by Sebastian Zachariah 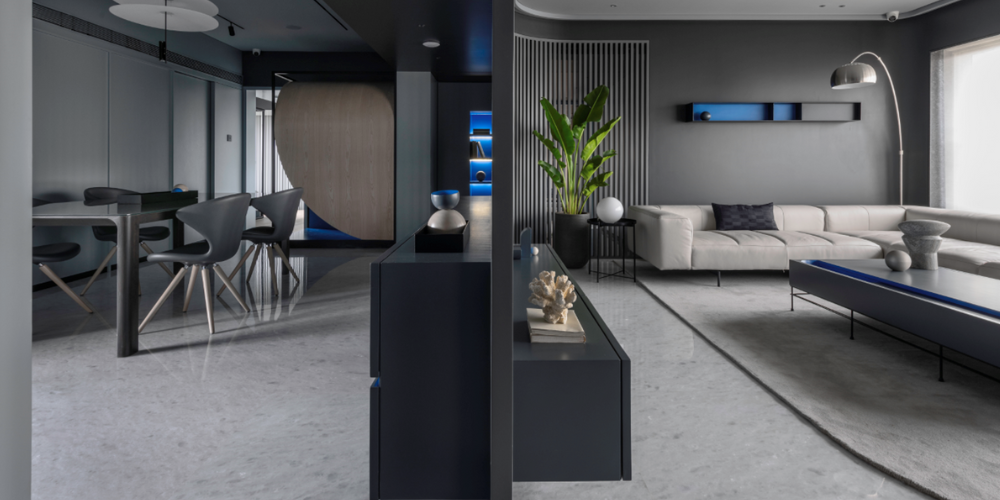 A curved partition seamlessly divides the living room from the dining area. It ensures that the visitor gets a gradual look into these spaces retaining the curiosity of the onlooker. A Hampton corner sofa and Veneto chair with a swivel function by Bo Concept add a sense of efficiency into the space; Photography by Sebastian Zachariah 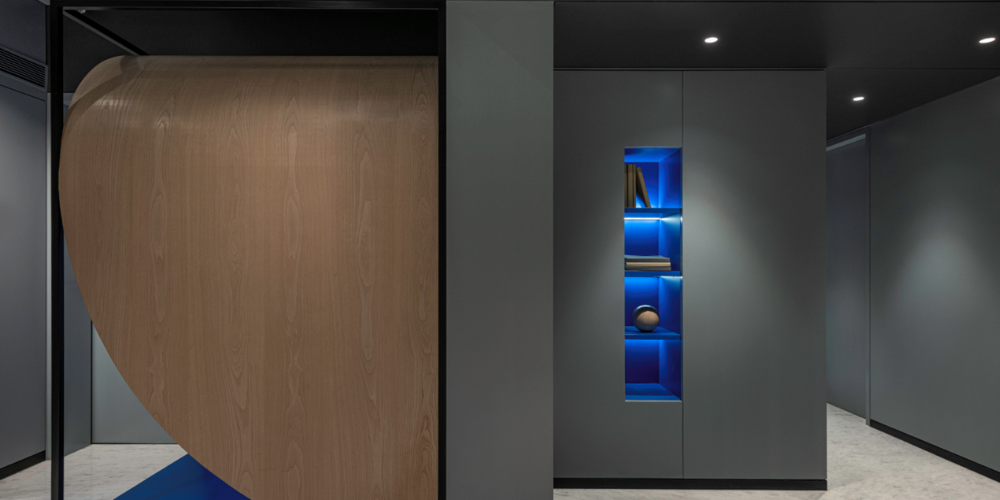 A Nordic theme has been followed across the home which is evident in every minute detail of the space; Photography by Sebastian Zachariah 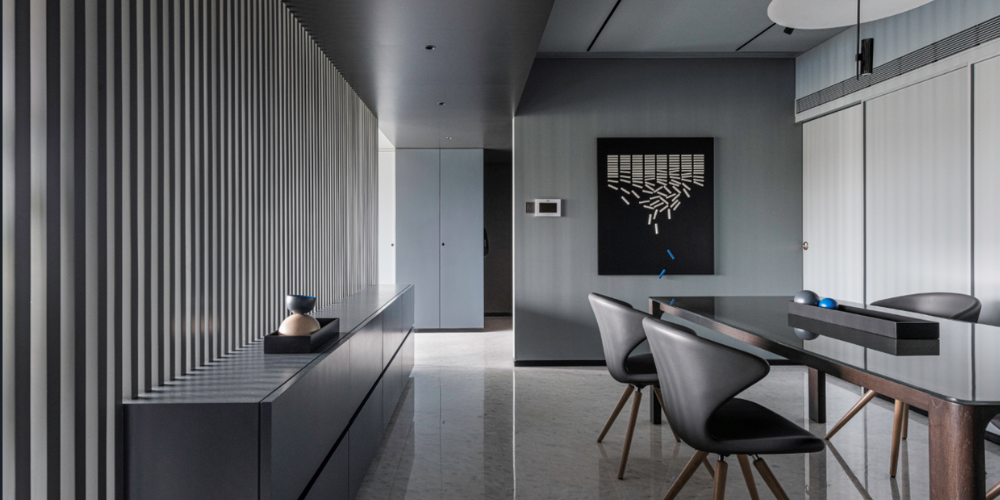 The slatted perforated partition in the dining area brings in the soft eastern light into this space making it come alive; Photography by Sebastian Zachariah 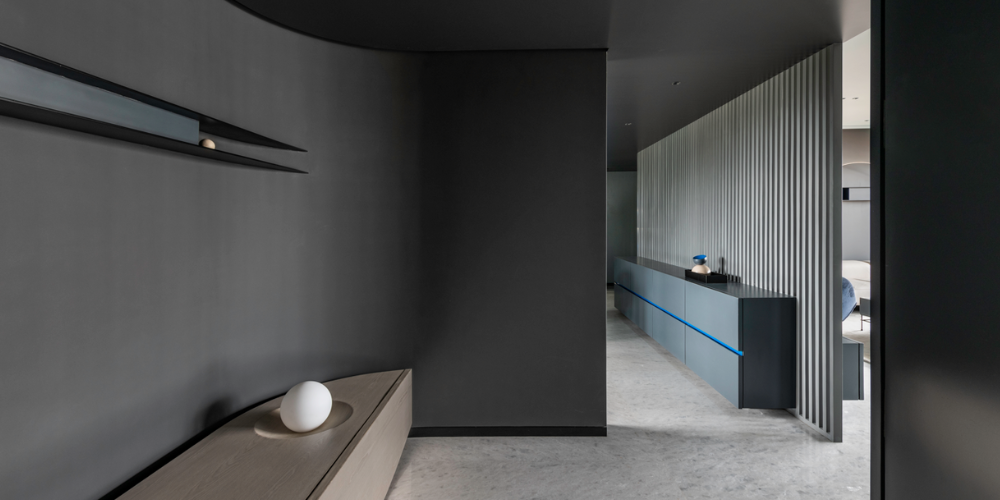 A charcoal grey alcove sits right next to the main entrance that has a curved bench which doubles up as a shoe console; Photography by Sebastian Zachariah 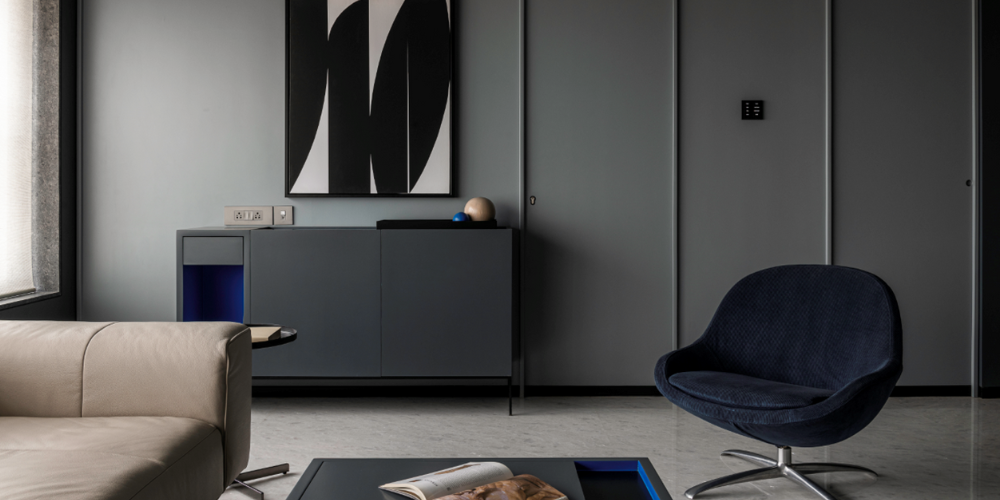 The bar console and coffee table are scooped with a curved mass, consistent with the primary language and exposing blue within. Tonon Italia comes in with some subtly brilliant pieces of furniture across the home; Photography by Sebastian Zachariah 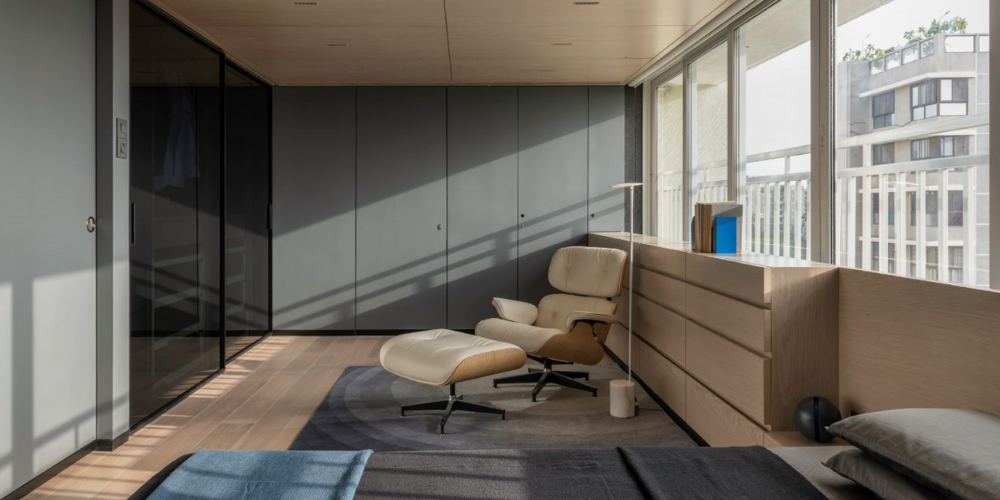 The linear nature of this space allows for the placement of the Eames lounger along with its Ottoman; Photography by Sebastian Zachariah 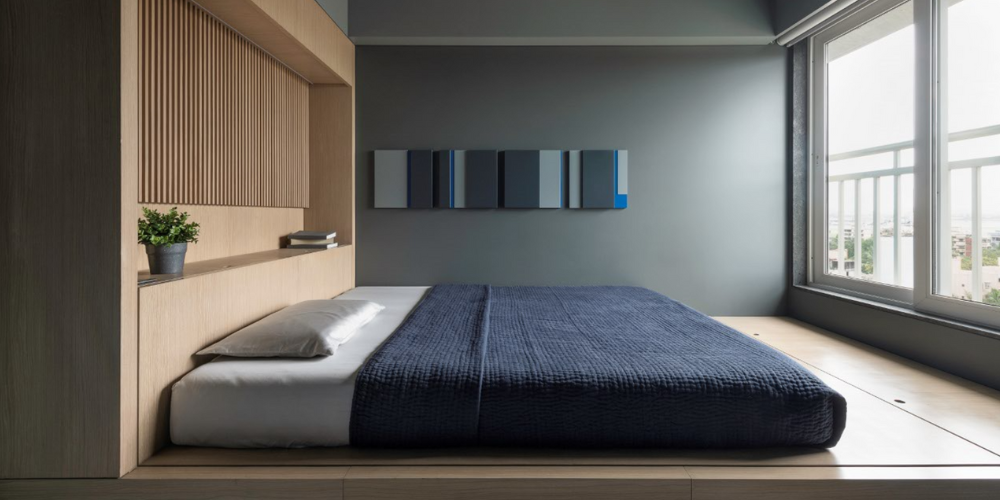 The bedroom has an outdoor balcony as well which lets in abundant vitamin D and allows for a fresh start to the day; Photography by Sebastian Zachariah 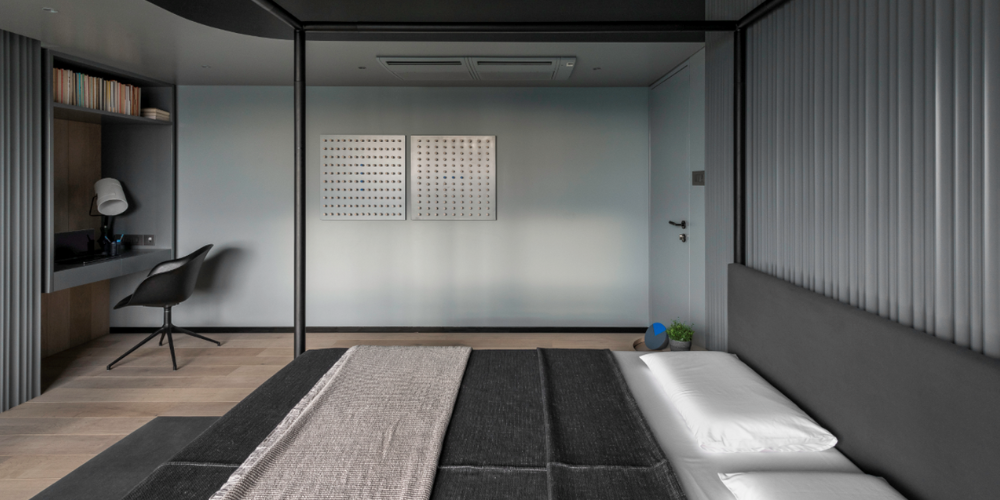 Bedrooms in this spacious abode are all dipped in greys, blacks and ashes which are consistent with the Nordic material palate; Photography by Sebastian Zachariah 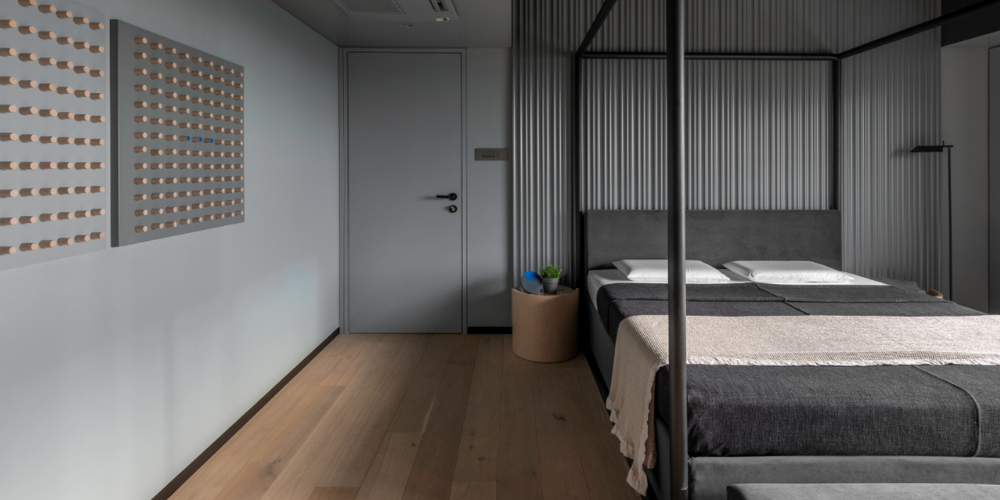 The flutes at both ends of the bed wall get tied by the presence of custom designed wooden artwork; Photography by Sebastian Zachariah

The city that never sleeps is home to some stark spaces and this home—‘A Hint of Azul’, right next to the airport, rightfully adds its name to the list.

The space is conceptualised for a family of five. Having been a part of the construction industry for quite some time, the family has built quite a network. Their main requirement was to have a simple and capacious home with a clutter free environment.

Amit and Advait mention that “a home which pays homage to Nordic roots, but stays minimal and is inviting was the goal. Hence, through the entire process of designing the home, the idea was to reimagine a space which can be as minimal as it can be.”

Tour every turn of this home

The structure of the home has been built upon the language of the fillet. These fillets create soft niches that smoothen the flow across the space. The partitions in the home allow for a smoother flow through spaces and furniture.

The slatted diving partition between the living and dining is an example of the designers’ understanding of ample natural light which was a must for the place.

The house has been dipped in a neutral palette with a hint of blue—Azul that travels across different forms and ties the house together. One enters the space through a nook which is a pause allowing one to gaze through the entire central space.

The crystal white stone sits on the entire floor in the common areas. Furthermore, there is a wood covering which enhances the greys. The touch of black that runs through the entire apartment in the form of skirting works as a visual guideline.

The main transition space here becomes the dining area, which branches out to all the intimate spaces—the bedrooms of the home. The artworks and the object are more like installations that are particularly customised for this space bringing in a hint of Azul. Hence, the name!

The house specifically breaks away from the idea of compartments; hence, the transition space is the most focused on. Each bedroom is an extension of semi-public spaces in terms of design language and material palette.

The designer says that playing around with the curves is not just two dimensional but it also has a third dimension to it, which in turn is crafted as the temple. “At the heart of the house, this object was designed in a way to create privacy and at the same time give a hint of the space within. The unusualness of the ghungat like form, aided in achieving so in a modern contemporary way.”

Since the interior design is retrofitted on a structural layout designed for a different plan, negotiating the ceiling with beams was a challenge. Hence, the false ceiling becomes an organism that extends itself from the outside into the bedrooms, creating thresholds between the inside and outside.

You may also like: Inside the contemporary and eclectic Bengaluru home designed by U and I Designs