; Kerala home by Workers of Art merge the memory of homeower’s voyages 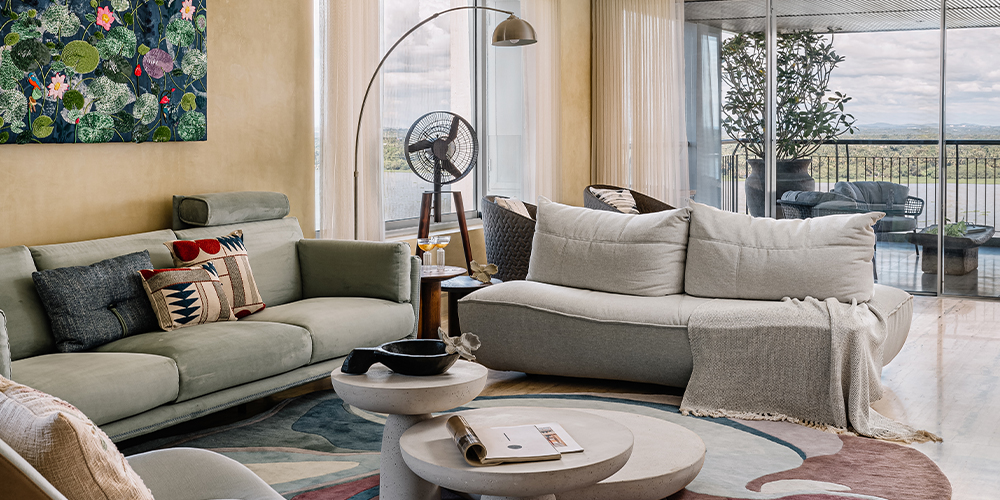 Layered beautifully in different tones is the living room with Bela Sanghvi tapestry art on the wall, couches from Ventura Gallery on a Neytt rug from Extraweave and cushions from Sarita Handa; Photography credits Ishita Sitwala 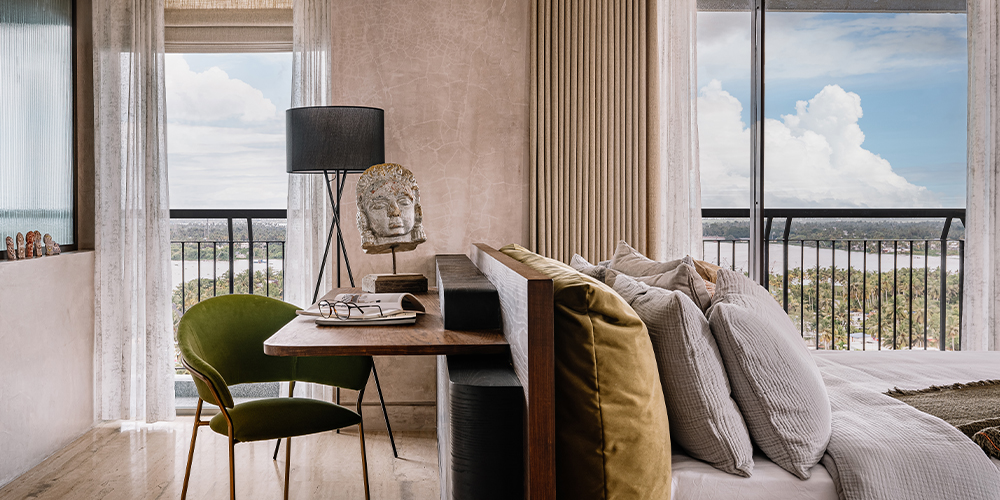 The western sleeping quarters feature a custom wooden dual-stained bed back, a chair from Pedrali, a cot from Ditre Italia and a study table; Photography credits Ishita Sitwala

Priya Rose and Rahul Mathew, co founders of Workers of Art design a 5000 sq ft home in Kerala. Covering the entire 14th floor this home is an interpretation of the embodiment of memory from the nameless places stumbled upon during the homeowners’ travel across the Italian countryside as a boy.

Influenced by his explicit narration of the architectural details bookmarked in his memory along with the need to form strong connections with the context —the backwaters, the landscape and the greenery beyond, this home is an exemplification of how dreamscapes can be turned into a design narrative – the ‘story’ of the project.

“This Kerala home is surrounded by unending views of backwaters on the East and expansive views of the fishing village of Kumbalangi on the other three sides. Curated to leave a positive memory in people’s minds, it has a sense of calmness, comfort and endurance” says the designers.

After discussions between the homeowners and designers, this four bedroom space was reconstructed into a three bedroom space with separate living and dining areas, an outdoor seating space and a bar area.

Tour every turn of this sumptuous home

The designers wanted to curate the vibe of outdoor landscape indoors by taking cues from earthy colours and natural materials like oxide, naturally stained wood and linen amongst others. This led to the design of a modern minimal home that materialises architecture and the surrounding landscape through the use of colour, natural materials, textures and framing views to further strengthen this connection.

All of the indoor living areas extend on the outdoor deck with unending views of the backwaters, the visual connections with the concealed bar, clad with cold rolled steel sheets, reflect the hues of the sky and the water on the other end.

In some areas of the home, the floors and walls are treated the same to blur the changing planes, making the space look larger and continuous rather than constrained. Whereas in other areas the walls are clad with metal to reflect off cues of the surrounding landscape, throwing back and changing tone as the day progresses.

Adorned with long corridors, they function as the vertebral axis to transition through the different zones in the home. The corridor is aligned in a way to have multiple rooms on either side. The home is conceptually cut in half to create a distinction between day and night.

The daytime is where we see backwater views where the sun keeps it alive from dawn to dark. In this half, lies the deck area with the outdoor living which fluidly moves into an indoor living area with three different types of seating at the bar. To its left are two bedrooms with attached bathrooms and a walk in closet, each of them overlooking balconies with water views.

Beyond them is the dining area which shares a wall with the kitchen. There is a cold rolled sheet clad onto the wall to reciprocate the dynamicity offered by the views on the other end of the passage. The kitchen area comprises a multipurpose room, a work space, butlers’ quarters and a restroom.

There is a very interesting play of light, materiality and colours across the home. In the first half areas such as the dining and living area pop out due to their brightness. From here, one moves into the passage where the space and colours become more compelling.

Moving onto the night area which starts off at the home’s entry—One is welcomed with a large wooden antique mask where one makes up their mind on whether to travel to the day zone for entertainment or retract to this dark space for solitude and sleep. The primary bedroom with a walk-in wardrobe, an attached bathroom and a statement powder room makes up the second half of the space connected by the central spine.

The primary bedroom became a sumptuous room since two rooms were merged to give it a spacious look. While its bathroom was made bigger by breaking and extending the walls and pushing out the WC into the dry area by incorporating a ledge to conceal the pipes away.

Conceptualised to seat 15 people comfortably, the furniture layout was such that added flexibility and brought people together through the aura of the space!

Ideas to bookmark—colours and materials

Throughout the design phase, the team was heavily influenced by the unending views surrounding the site, reflected through the complex material and colour palette manifested. Colours and textures invite the environment into the interiors which is otherwise just a view or a backdrop, making the space feel like a continuation of the landscape, making the space feel like it’s a part of a much bigger story.

The DGU Saint-Gobain glass helps cut off excessive heat gain from the western sun by reducing the load on the HVAC.

The designers Priya and Rahul took on the challenge of experimenting with an array of pigmentations in the oxide walls. They followed a traditional way of cement oxide application and had to find older masons who practised the Mattancherry technique for the same. This led to the creation of a beautifully warm and almost sunset hue which complimented the blue skies, water and lush green in the landscape.

Each element in this home has been incorporated to play a significant part which adds to the homeowners’ story. Each of these has been worked on with intricate details to an extent that their functions are now inherently connected. The result is a diaphanous space for the residents to advance everyday life in!

Scroll down to view more glimpses of this home!

You may also like: An archetypal Mumbai home with mid-century furnishings