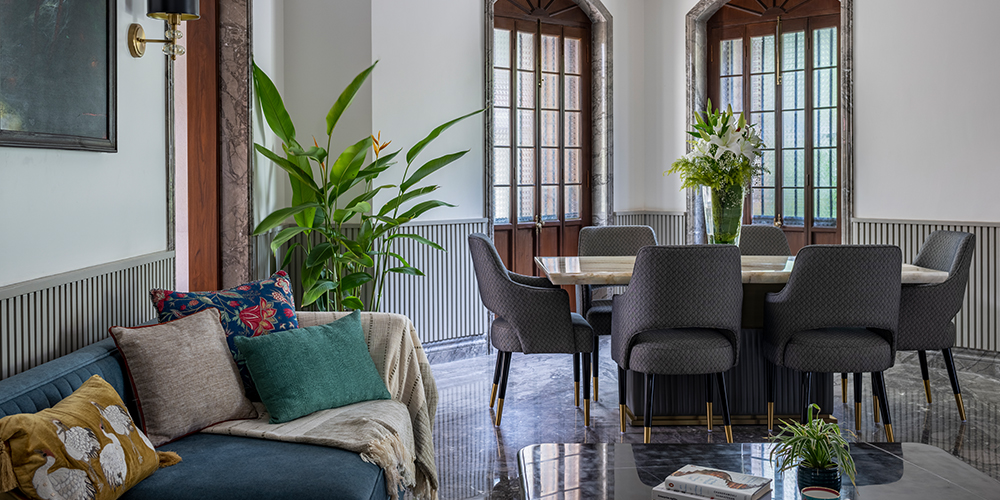 The living and dining spaces which are almost like the lungs of this floor, are done in a soft muted palette of greys and blues; Photographs by Prashant Bhat 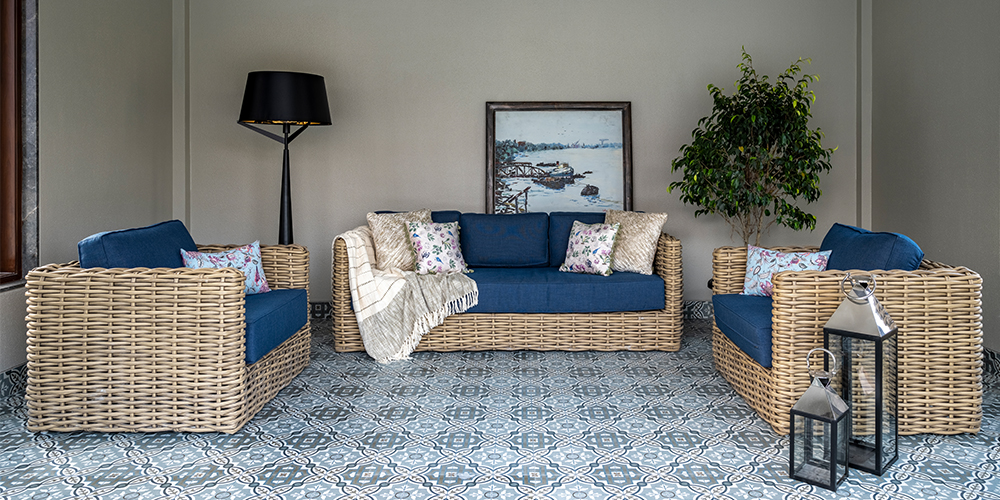 A small room on the terrace on the second floor is the perfect spot for that little cup of coffee and a book to read; Photographs by Prashant Bhat 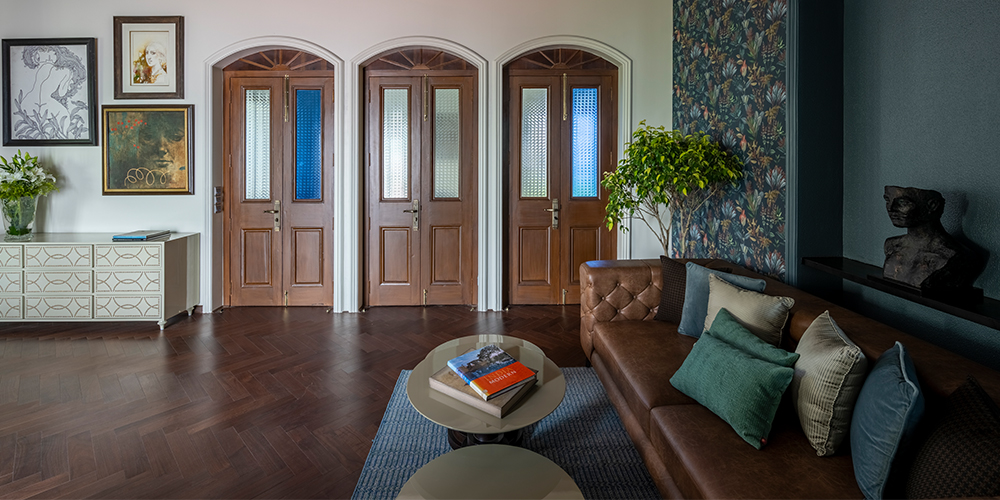 The den area on the first floor, used for entertainment purposes, is the highlight of this entire property; Photographs by Prashant Bhat 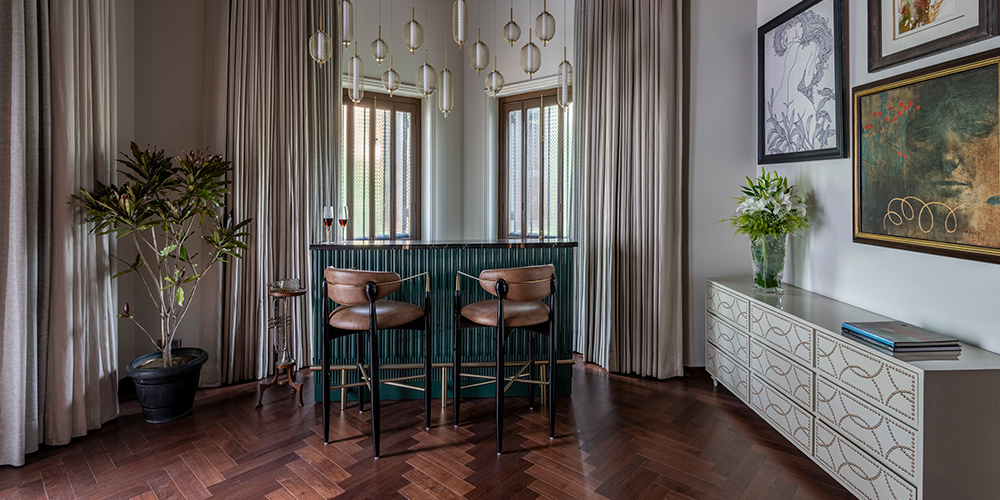 Elongated jaali work encased the hanging lights, creating an interesting feature on top of the bar; Photographs by Prashant Bhat 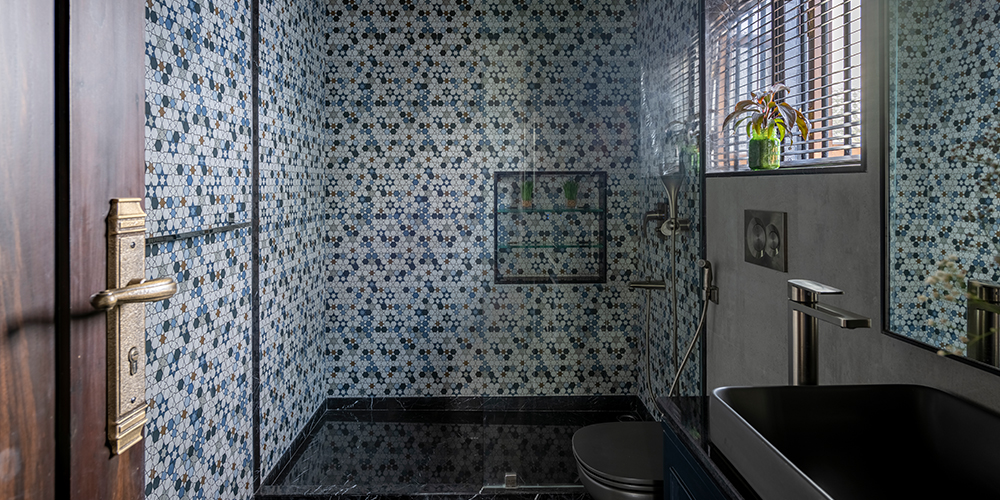 A pop of colour dominates the bathroom of the guest room thanks to Kajaria tiles; Photographs by Prashant Bhat 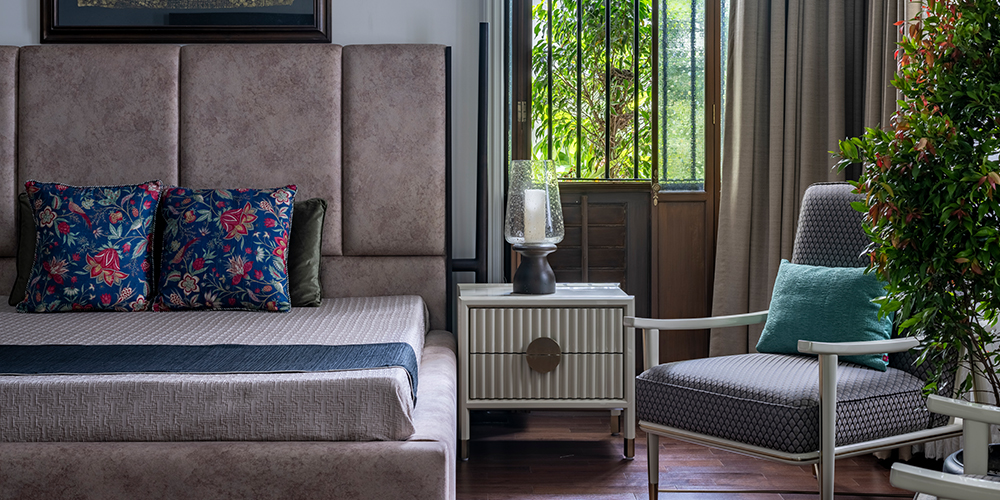 The large guest room on the first floor is designed with a two-poster bed, and wardrobes which tend to resemble a louvred look; Photographs by Prashant Bhat 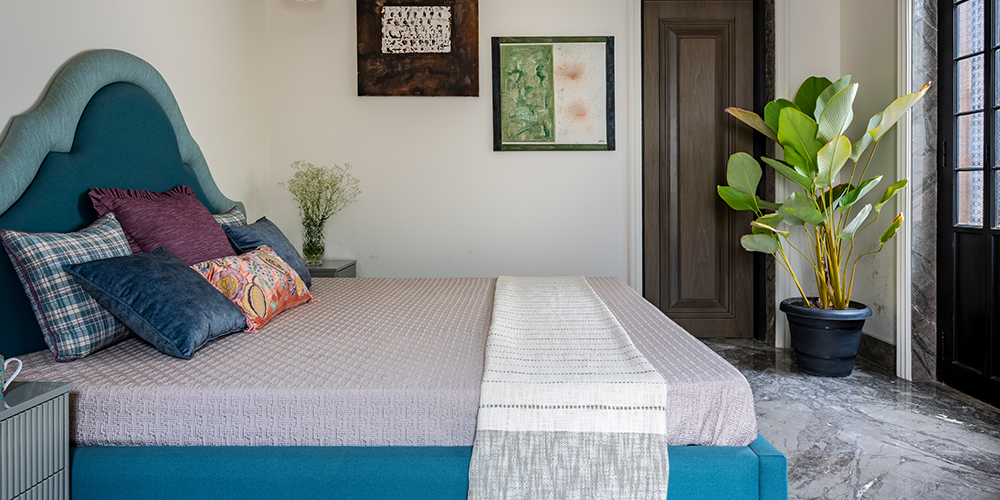 The guest room on the ground floor comprises of furniture that was kept minimal and clean, using a soft curved bed; Photographs by Prashant Bhat 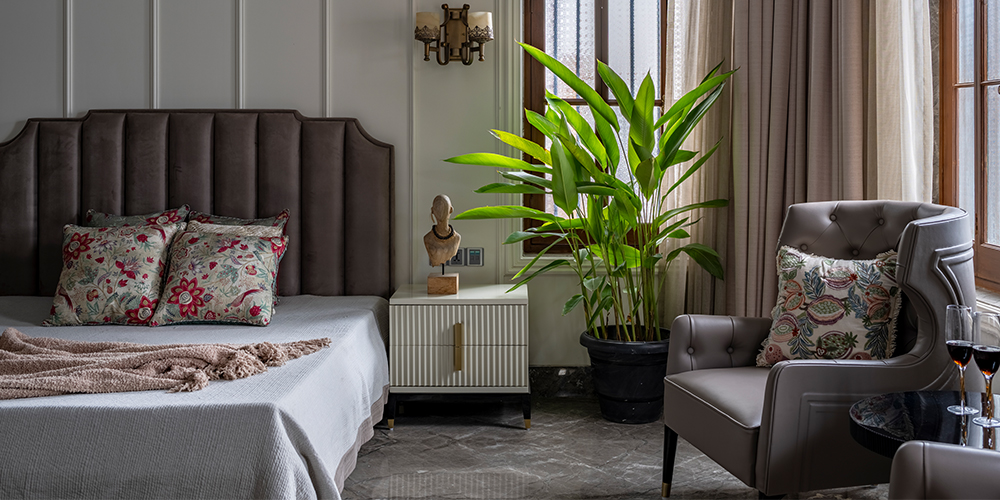 The windows of the main bedroom overlook a nice green patch which allows a lot of light to flow in; Photographs by Prashant Bhat In the living area, Rupande has wisely pulled out materials, colours, fabrics, and furniture in a very tidy and scheduled manner; Photographs by Prashant Bhat

Where there is ruin, there is hope for a treasure. When founder and head designer of her eponymous practice Rupande Shah got the chance to refashion this quaint old bungalow built in the pre-independence era, she grabbed the opportunity with both hands to restore it to its former glory. Tucked away in a busy street corner of Kolkata—the city of palaces, it becomes almost imperative to retain its character yet reinvent it in a way to suit modern-day living needs.

“Since it was not occupied for a few years, a natural degeneration of the property due to neglect was seen. On our very first meeting with the client, we suggested restoring the property and maintaining the pre-independence persona of the house. The idea was accepted wholeheartedly and we started the journey from that seed,” reveals Rupande.

Striving to maintain an old-world charm, the space is designed in a way that withholds its vintage glamour, allowing the interiors to follow suit in the same design language. As for the colour palette and materials, Rupande and her team concocted a design language reminiscent of the 1950s—soft muted colours with floral and pastel highlights, and the occasional colour pop in a couple of areas.

A noteworthy aspect, however, is the way the designer has managed to retain the beautiful and primitive doors and windows. Layers of paints were scraped off and polished to exhibit the original Burma teak.

LET’S TAKE A STROLL DOWN THE MEMORY LANE

Remember the bungalows in classic Bollywood movies with a driveway? The entrance was given a new lease of life with concrete tiles that prompted the pebble stone effect, convincing the visitors as if they were in a movie set.

Upon entering through a timeless blue coloured gate, a grand passage leads the eye to its staircase, the main artery of the property. A level lower than the main house, the kitchen on the left can be accessed through a patterned cast iron jali door.

On the right side, soft grey and blue hues exude warmth in the living and dining spaces. Arches were broken down in the dining area to allow light inside the space, along with breaking down windows to the floor and reconstructing it, keeping the same louvred look intact. The living area shares access to the worship area as well as the primary and guest bedroom. The wooden staircase showcases a double height wall designed in a check pattern and painted in a dark teal colour.

The first floor hosts an entertainment den and two guest rooms with one of them overlooking a private terrace. A spiral staircase, (how could you imagine a vintage building without one?) leads to the lush green terrace with a quaint nook to unwind on the second floor.

THE DESIGNER AND THE BREAKTHROUGH ELEMENT

For Rupande, the foyer areas acted as cherries on cake for their sheer scale and usage. She quotes David Charette— “A foyer isn’t an afterthought. It’s like wrapping a gift, so personalise it.” Both the foyers had distinctive art to allow the guests and inhabitants a pause to enjoy these wonderful paintings.

There is an undeniable magnetism in all things old and vintage. Ensuring the use of ‘local’ material selections, colours, choice of individual pieces, furniture and lights, Rupande effortlessly digs out the treasure from the trove and makes this home look like a fairytale home.

Scroll down to see more:

Can’t get enough of all the vintage vibes? Check out the Tribeca Loft in New York by ATRA Form Studio!