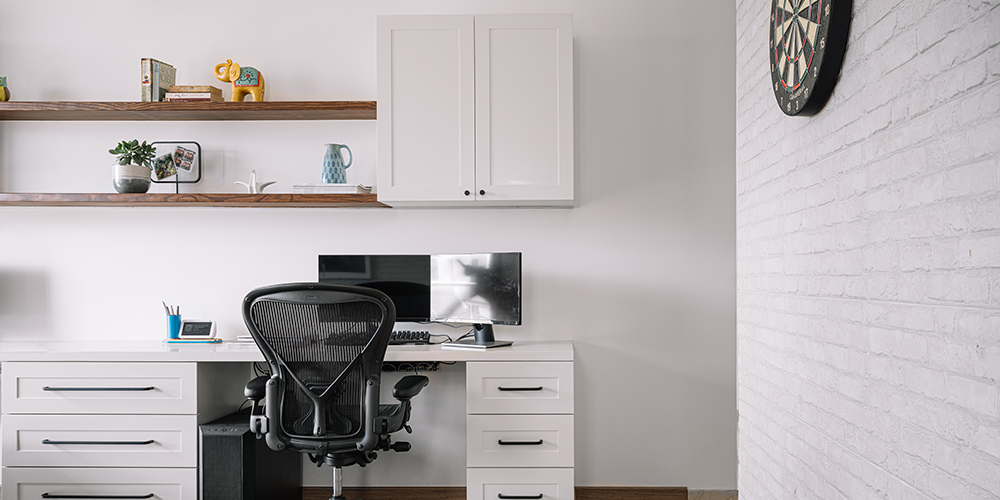 A dedicated minimalist yet effective workstation has been amalgamated into the home office area layout in the form of a running desk with drawers below, overhead cabinetry and open shelving cloaked in a warm white; Photographs by Ishita Sitwala 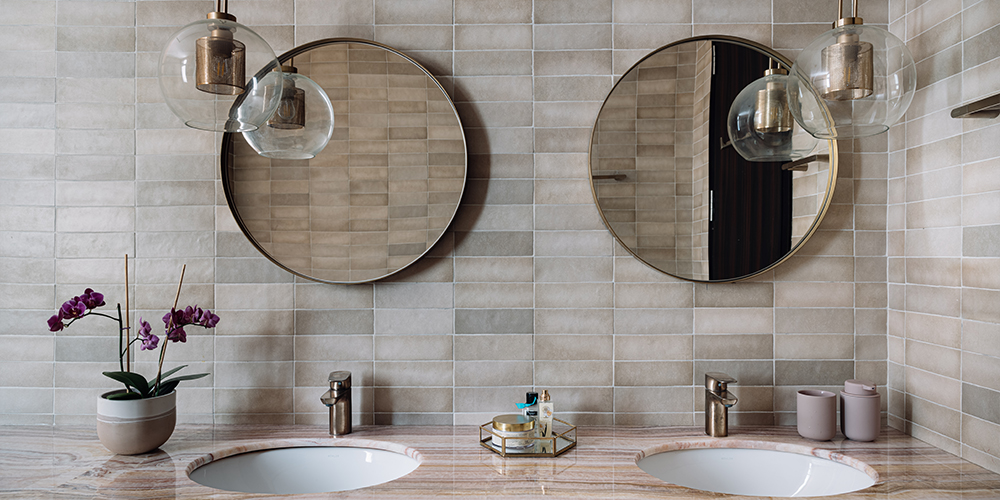 These pendant lights featured in this washroom emerge as perfect light fittings, in order to capture the calmness in a washroom; Photographs by Ishita Sitwala 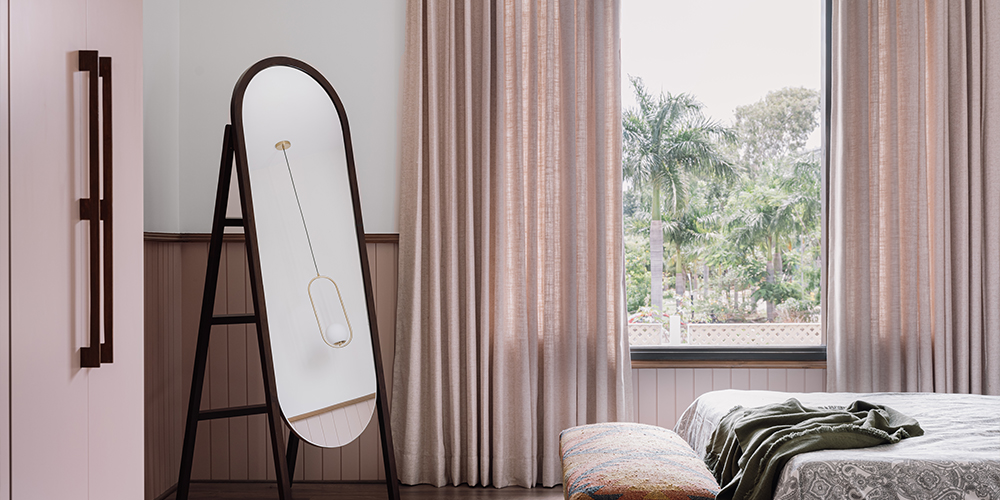 An elliptical standing mirror occupies a corner of the guest bedroom, amplifying the sense of space and light within; Photographs by Ishita Sitwala 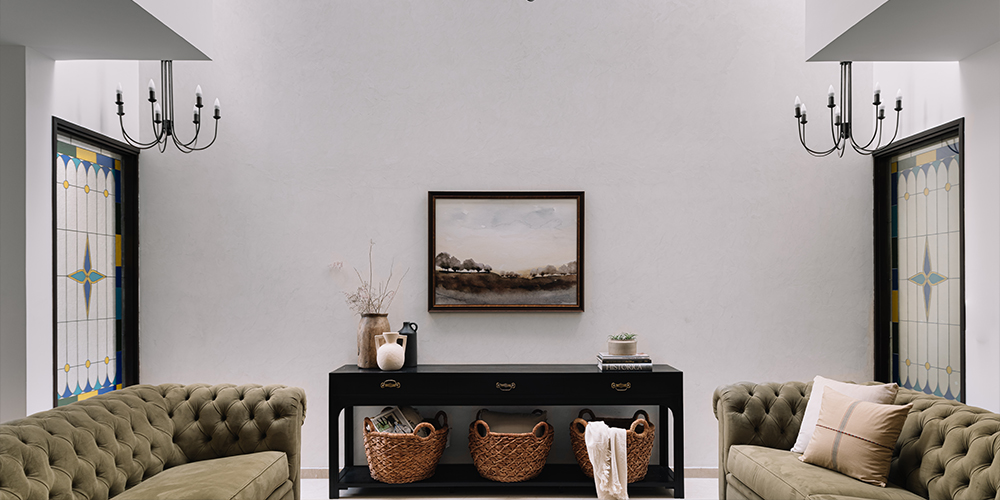 The lofty volume of this living space is elevated by a quartet of stained-glass windows that let in light into the space in rays of tinted illumination; Photographs by Ishita Sitwala 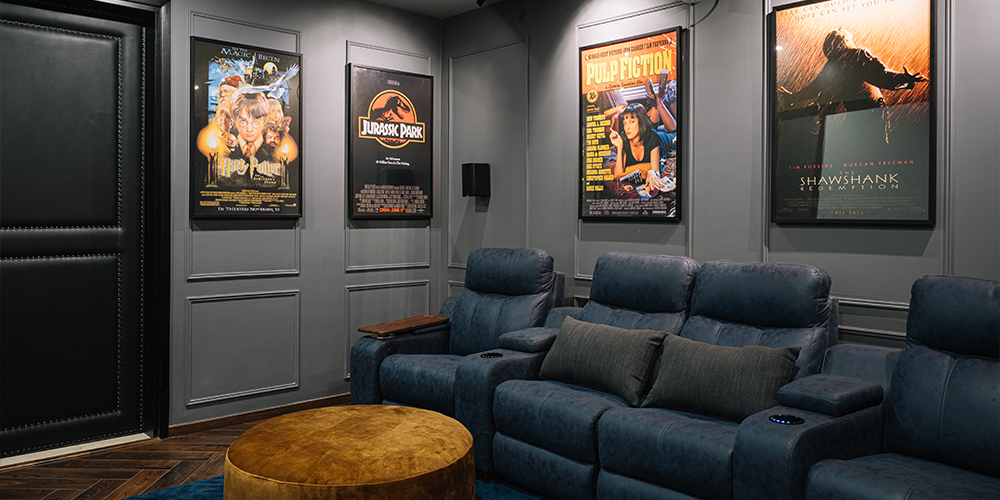 Immersive in its landscape, the home theatre is the couple’s cinematic retreat within the comfort of their home; Photographs by Ishita Sitwala 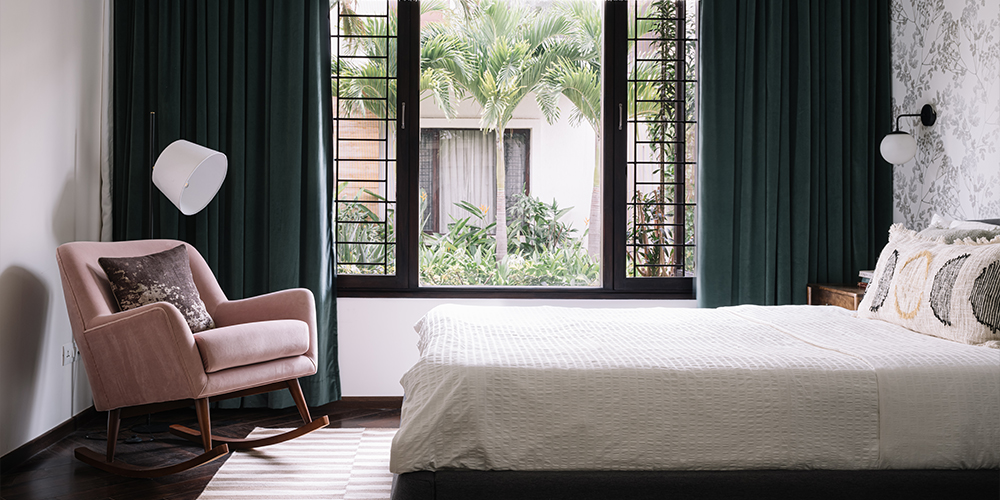 The statement monochrome botanical wallpaper imbues a minimalistic feel into this couple’s parent’s bedroom, against which the preowned charcoal upholstered bed has been placed; Photographs by Ishita Sitwala 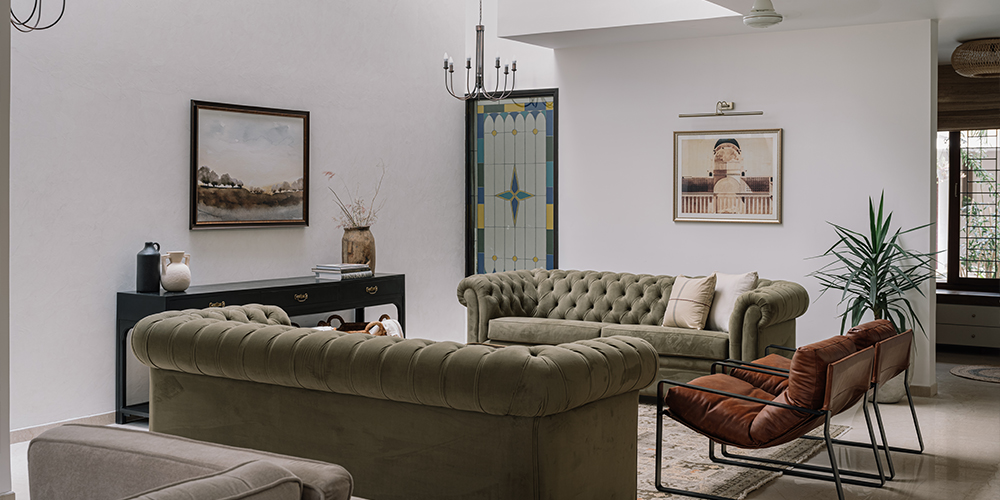 A trio of black metal chandeliers by The Purple Turtles waft into this double-height living space, crowning the conversation area below; Photographs by Ishita Sitwala 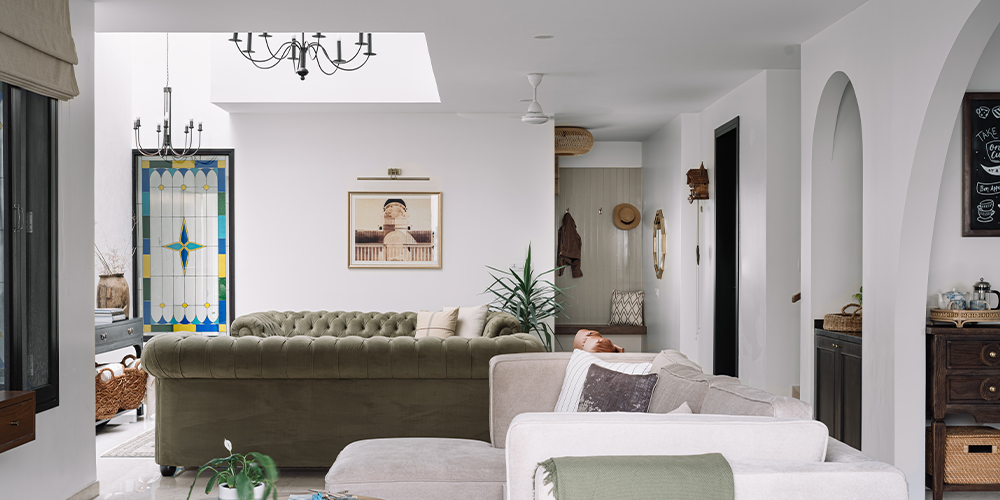 The stucco-finished wall in this living space introduces a sense of texture and warmth into the space, creating a neutral canvas against which muted hues assume centre stage; Photographs by Ishita Sitwala 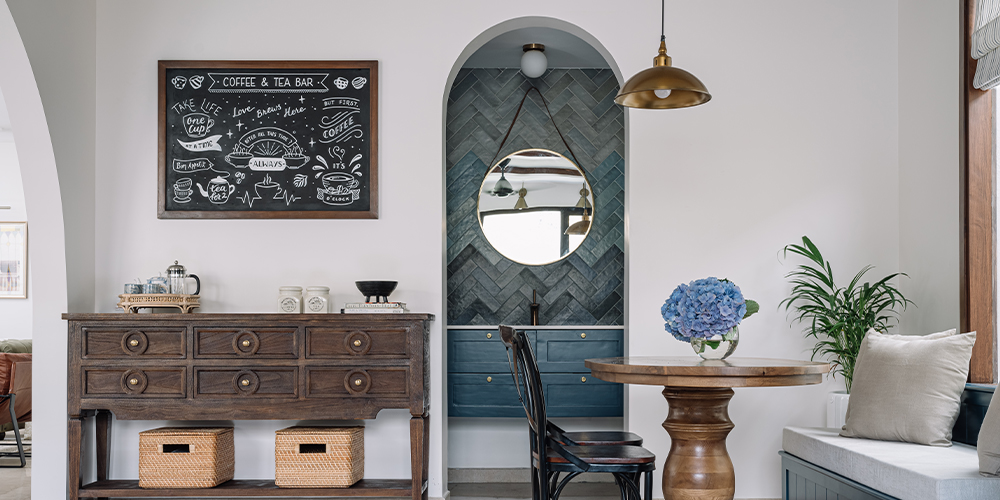 A distressed wood console adds umpteen storage to the butler’s pantry nook while the chalkboard introduces a sense of whimsy; Photographs by Ishita Sitwala 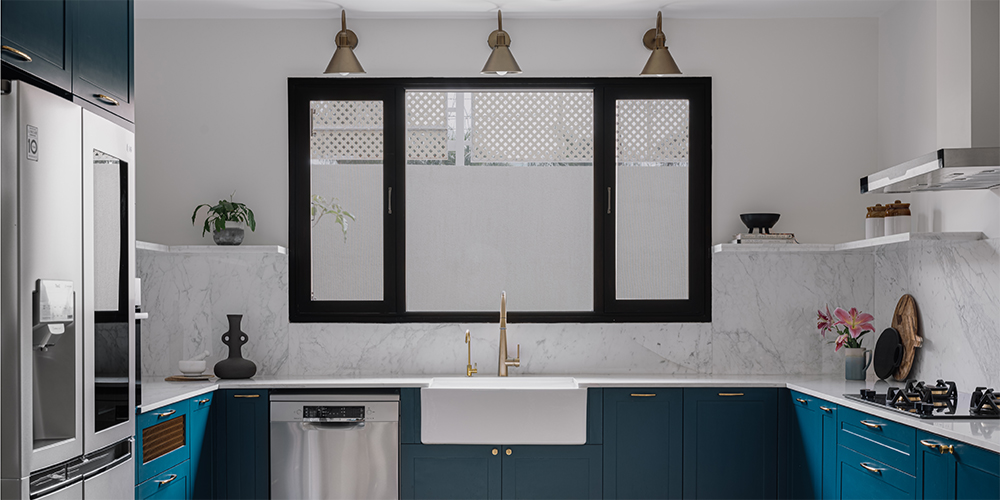 This kitchen is a concoction of classic countryside elements meshed with all the bells and whistles of a modern and functionally adept one; Photographs by Ishita Sitwala

Visualised as a modern European-inspired farmhouse, the genius of this quaint home lies in the simplicity of its vintage elements fused with an old-world charm. “We crossed paths with the sprightly young couple in early 2020. Ancy Lina and Arun Kumar’s personas are a physical representation of the analogy of ‘yin and yang’ but in the best way possible! While Ancy’s idea of the aesthetic of the home was connected to a vivid vision, Arun’s practical approach towards design allowed us to string together a design narrative that represented the design grammar of the home,” says designer Vinithra Amarnathan, founder of Weespaces.

Located in the residential suburbs of eastern Bengaluru, The European Farmhouse Villa is a two-floor residence spanning 4,000 sq ft. The ground floor encompasses a porch, foyer, living room, family lounge, kitchen and dining, butler’s pantry and beverage bar, parent’s bedroom and the staircase. The first floor consists of a home theatre, a primary bedroom, a guest bedroom and the den and the home office.

Amarnathan imbibes the European aura in unconventional and ingenious ways. As opposed to furnishing European aesthetics, she incorporates European designs amidst details and subtleties—on walls, doors, windows, and light fixtures, knowing that these structures would draw the most attention.

The statement deep blue entrance door with brass inlay is reminiscent of classic English country homes. and The tall glass floor lantern on the porch and the Victorian wall sconce grace the nook while drawing attention to the calligraphic signage.

Without directly imitating the quintessential characteristics of a farmhouse, she has brought forth reimagined nuances.

Featuring parts of a farmhouse mudroom, the foyer is adorned in umber and taupe tones, with a cantilevered wood bench floating against a panelled segment of the wall. A series of wall hooks double up on the function of a classic coat rack. Earthy rattan makes a debut in the form of the woven rug and the flush-mount ceiling light casts beautiful shadows.

These dainty details read as paragraphs of a thrilling book, as though something uncertain is anticipated. The pairing of stucco-clad walls in the living area with a quartet of stained-glass windows filters light into the space. Strokes of tinted illumination further enhance this warmth—lending a divine, holy vibe in the space.

One of the significant colour palettes that blooms but in an understated demeanour is the true-blue, classic, farmhouse style, open-plan kitchen. Amarnathan asserts, “A classic palette of deep teal-hued cabinetry, brass hardware, and ubiquitous usage of white marble dot the canvas of the kitchen. The handsome marble douses the countertop surfaces and traverses the backsplashes to finally culminate as sleek open shelves. Also, an eat-in kitchen was always on the cards for the clients as they visualised cooking while indulging in simultaneous conversations across the day. The dining space has been earmarked by a banquet seat under the picture window, a robust oval wood pedestal dining table and a few café chairs that rest under the wooden ceiling beams”.

The use of patterned tiles is yet another fascinating feature in the butler’s pantry and the beverage bar area. Knowing the couple shares wide interests, the ombre-washed tiles dabble in a spectrum of blues and greens, seamlessly resembling their charming nature. Moreover, a custom coffee and tea bar made for an idyllic addition, pop up as a dedicated corner for the beverage connoisseurs.

To add variety to the aesthetics of the villa, Amarnathan has experimented to the utmost. The sliding barn door of the home theatre is enveloped in a black chevron pattern on the outside and boasts of leather padding on the interior with rivet detailing. Autumnal colours like ivory, off-whites and mustard paired with accents of black brew visual sorcery in the primary bedroom for the couple.

A villa that inhabits drama, rustic charm and luring sensibilities at great lengths, is surely not easy to design. Amarnathan has executed all of these elements flawlessly.

She concludes, “Our design philosophy is always to create spaces that tell the story of people who live in it and also one that has an inherent sense of flow and continuity! In this home, it was difficult to ensure this given the large square footage. But this is my favorite feature of the home, in how it flows from one space to another, each space distinct and nuanced”.

Scroll down to see more glimpses of this stunning space—

If you loved the jaw-dropping aesthetics of this Bengaluru abode, be sure to check out this Mumbai home by kaviar:collaborative !