; The Essence of Parijat: Megha Kedia designs a scenic home in Mumbai 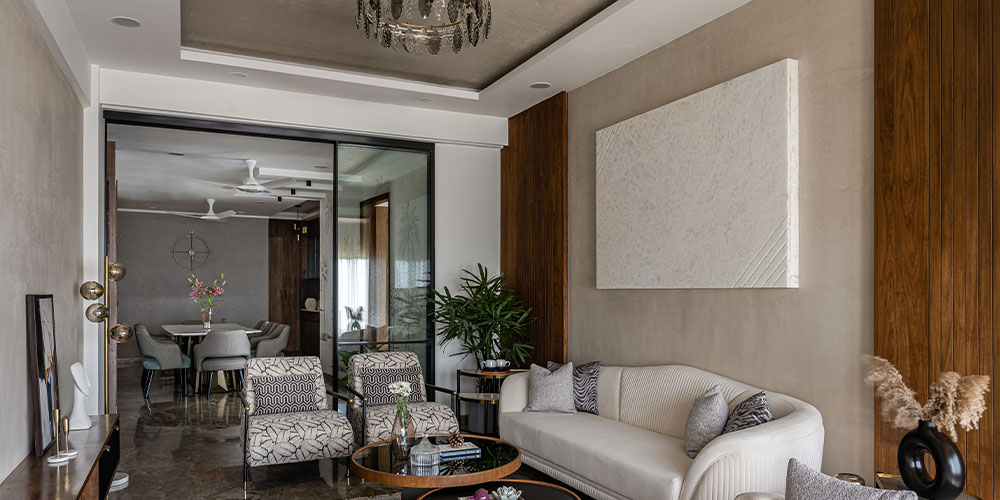 The living area has been carefully crafted to capture the mid-century modern vibe. With a chandelier from The White Teak Company, marble flooring by Classic Marble Company and round sofa fabric from Bharat Furnishings, this space becomes the focal point of the home; Photography by Noaidwin Sttudio 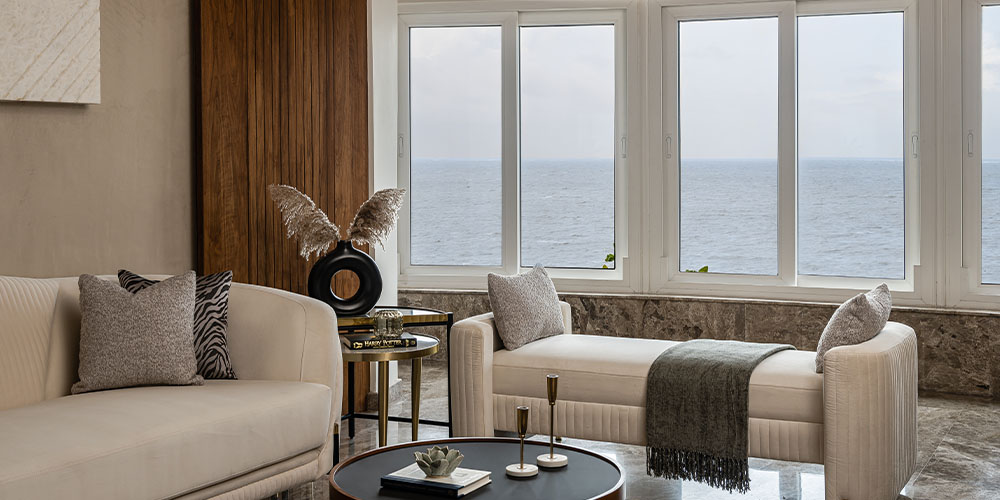 Living room sofa and chairs have been brought in from Saloni Mobilya whereas the vast windows are by Fenesta Windows. The side tables are bespoke and have been executed by Megha’s execution team—Diosity; Photography by Noaidwin Sttudio 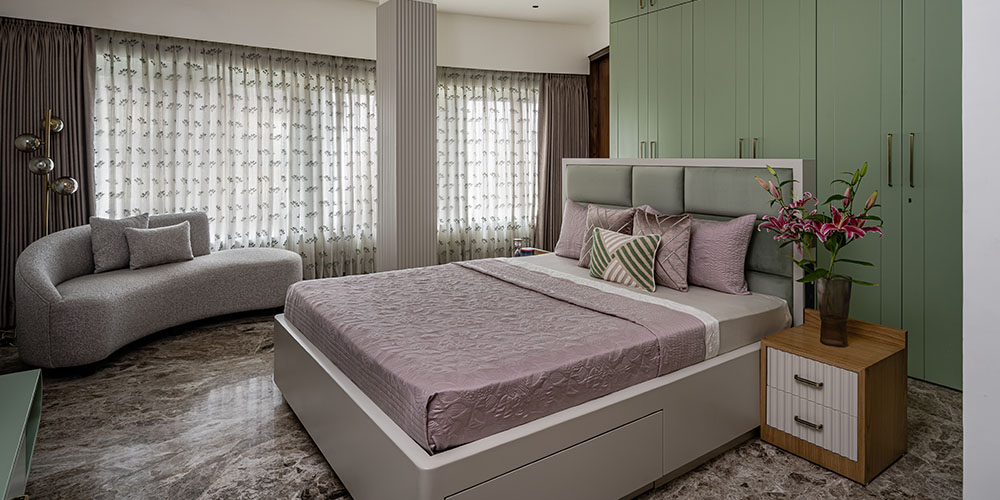 Lights by Jalaram Lights and Philips Lighting India light up every space in the home and add a vintage look to this rustic modern home. Fabric and furnishings of the home are all from D’Décor; Photography by Noaidwin Sttudio 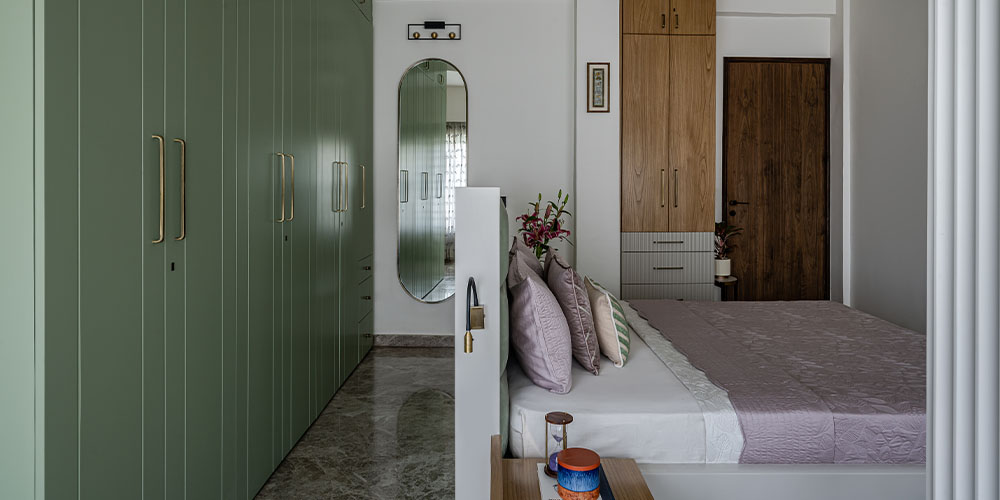 A pattern of veneers runs across the home and has been brought in from Decowood Veneers; Photography by Noaidwin Sttudio 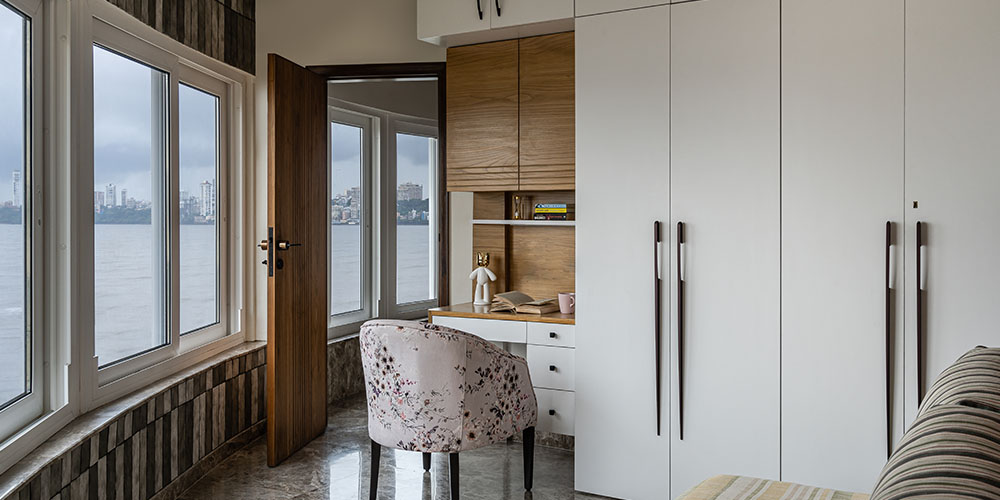 The daughter’s room has been converted from a verandah and has expansive views of the Arabian Sea; Photography by Noaidwin Sttudio

Curated by Megha Kedia of Megha Kedia Design and styled by Devika Aras, ‘The Essence of Parijat’ is an expansive home that sits in the midst of Mumbai with a scenic view of the Marine Drive. With an area of 1930 sq ft, this home brings in the rustic charm with a blend of modern minimalism that makes for the perfect abode to come back to after a hectic day of work.

The personalisation of design, interplay of materials and textures and the exclusivity of the home’s character exudes a sense of charm which resonates with the homeowners’ tastes.

This nature inspired home had to have a complete reconfiguration of its internal layout. It is an old apartment which got renovated after about five decades to create a liveable space for the family and their entertaining lifestyle. To match with what the homeowners wanted, a handful of walls were removed. The old drawing room was converted into a son’s room whereas the current living room has been remodelled from a bedroom.

A wall has been removed from the entrance to keep a single entry way into the kitchen and create a space for the mandir. The most interesting bit for Megha was the washroom for the primary bedroom. She says “Since we had to create another washroom for the son’s room we needed some extra space which got covered by the shaft. Brilliantly, we have used the shaft area and converted it into a shower.”

Tour every turn of this mid century, modern home

One sees a console with beautiful handmade paintings as they enter the home. This console also acts as a storage space and with its background colour, it really enhances the space.

Next stop is the kitchen on the right which is fully equipped with a proper storage and appliance unit as required. Opposite to the kitchen, on the left side is a larger than life crockery storage. Using veneer is Megha’s signature style and she has outdone herself with respect to the same again. She has used American Walnut veneer to add depth to the backsplash of the long countertop.

The dining table and chairs have been customised by Megha and team by using dual fabrics which adds a hint of teal but keeps the monochrome shade fabric on its top. The palette of this home has been inspired by the Arabian Sea which is very evident in this space. Textured wallpaper and wall art in this space takes the space up a notch.

There is also a living room separated by a glass partition to create a distinction between the living and dining space. Once the doors of both spaces are opened together, they merge to create a fluid and efficient look.

The living area has a sofa with two lounge chairs and a bench for seating while a multi purpose storage unit acts as a liquor cabinet. A sleek television, chandelier and textured walls compliment the theme of the space. As for the side tables here, they are bespoke and have been customised by Megha’s execution team—Diosity.

Next stop is the son’s room which is next to the massive crockery unit. Everything is customised to suit the son’s tastes. The major furniture in this room is dipped in hues of grey while the side tables and the dresser add a contrast with their green tones. Fluted wooden panels add a depth and break the stark white continuing into the next room.

The next room is this home’s primary bedroom which boasts of an island bed with wardrobes behind. Two sets of side tables with drawers have been added. A customised mirror with a brass rim balances the colour palette in this room.

The bathroom accompanying the primary bedroom has the most beautiful ceramic tiles while the cabinet here is made with fluted glass on one of the cabinets.

Last stop of this home is its verandah which actually has been converted into a closed space to be used as the daughter’s bedroom. Like every room, this room also has ample storage space and one can soak in the breathtaking sea views from this room.

The home has been designed after keeping in mind its proximity to the sea and hence tiles have been added in this room on the periphery wall due to weather protection from the closeness to the sea.

For Megha, every element of the space was exciting and fun to design! Since she is based in Gurugram, she had to schedule her visits to the ‘city of dreams’ quite frequently. Hers was a small team and most of the work was done by Megha.

The extremely challenging zone on the other hand was to lower the windows in the rainy season. “There was such a high wind pressure and the rain was at 180 degrees. We are thankful to our skilled execution team who successfully completed this challenging task,” says Megha.

This home is a series of choreographed spaces with views to the outside from every angle. A mid century modern home, The Essence of Parijat uses modest materials without eye-piercing mannerisms. As defined, Parijat is a white & aromatic flower that has enormous health benefits, just like this home.

You may also like: An archetypal Mumbai home with mid-century furnishings designed by Kavan Shah Design Studio