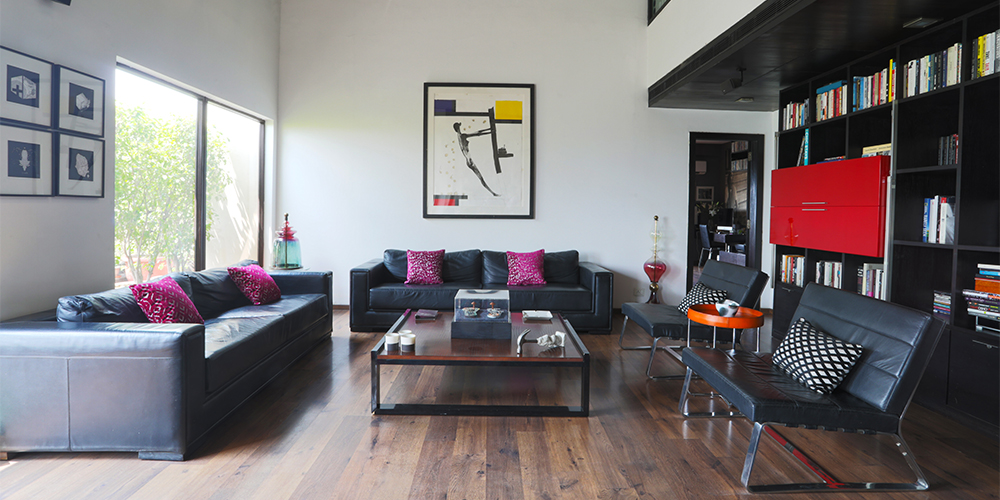 The lounge features works by Atul Dodiya and Seher Shah, furniture from FTS by Sharmilee and Klove Studio lamps; Photography by Tanju Ahuja 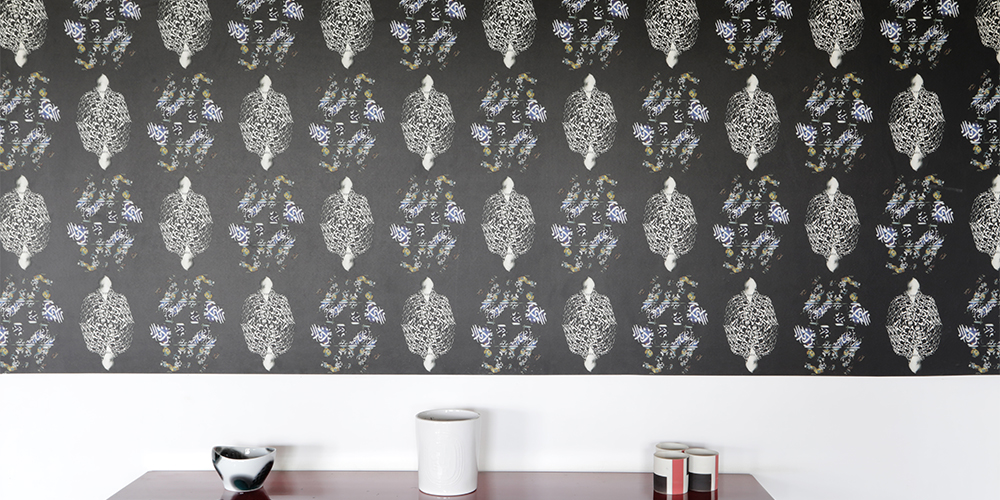 A corner in the living room houses a sleek red console, spray painted at home, under a monochrome art piece; Photography by Tanju Ahuja 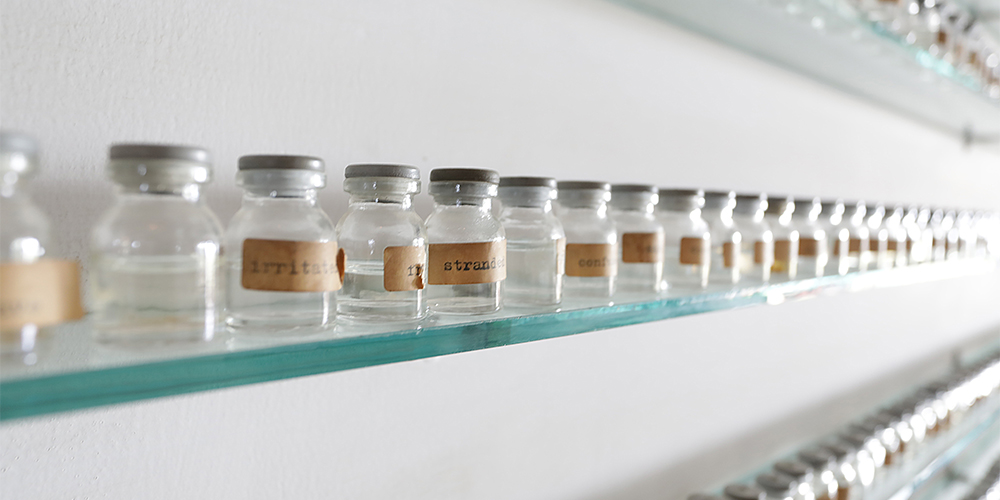 Close up of the installation; Photography by Tanju Ahuja 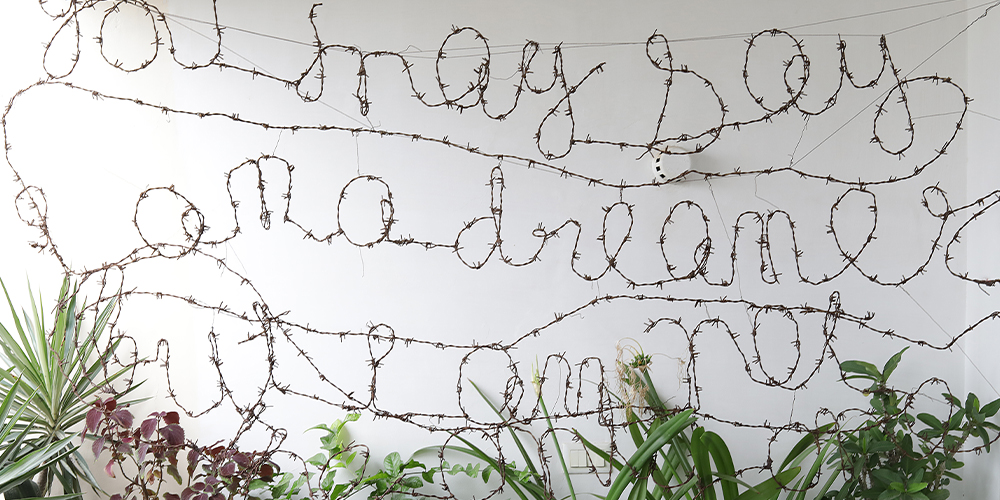 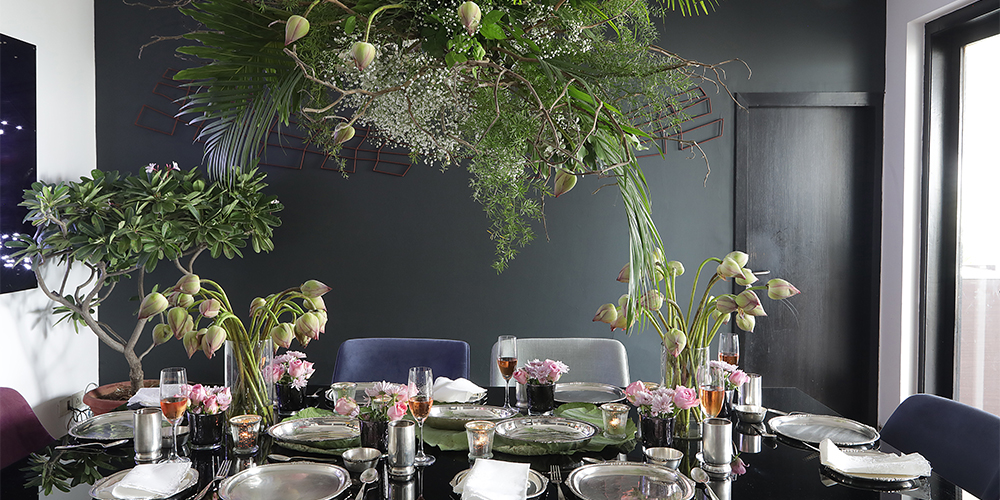 Furniture from FTS by Sharmilee and table styled by curator and interior stylist Namrata Datt of Maison 15 grace the dining area. It is decked using silverware, personal accessories and flowers. Ayesha Singh and Mehreen Murtaza’s artwork is partially seen behind the foliage; Photography by Tanju Ahuja 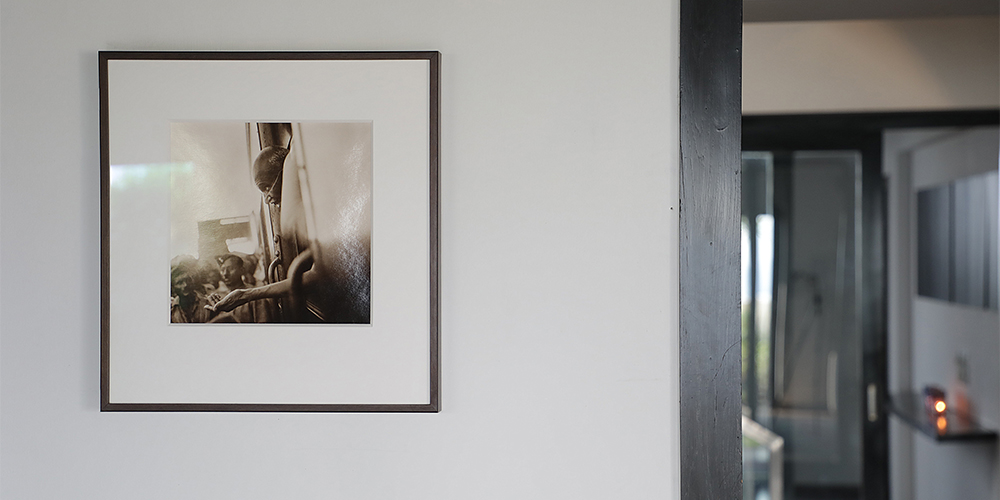 A portrait of Gandhi en route Dandi for the historic march is placed in the living room; Photography by Tanju Ahuja 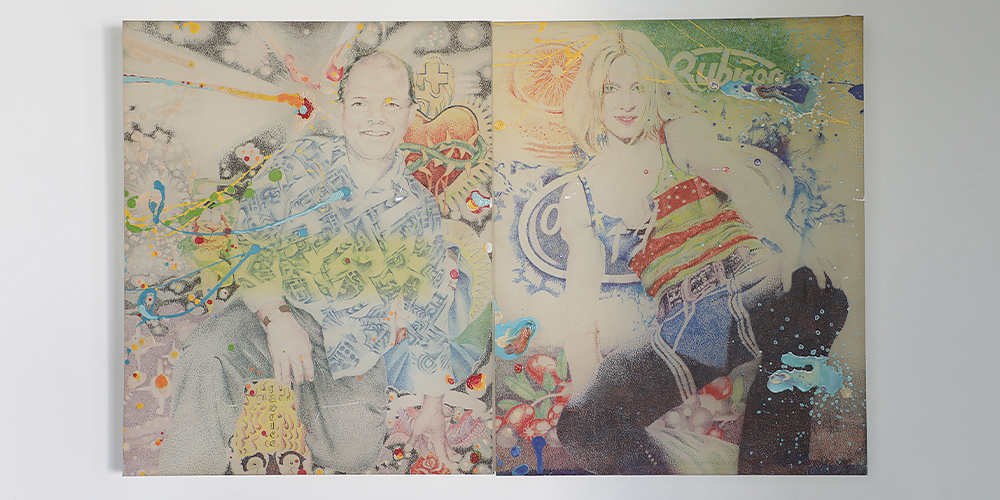 Madonna and The Shopkeeper by Faiza Butt; Photography by Tanju Ahuja

Like all homes, ours has identities apart from the address it is recognised by. It is known as the home of Wazza and Henry, our two curious boxers, as well as the house of the lady in red because of the bold and arresting Fornasetti wallpaper at the entrance.

Most find it memorable and it has become a point of reference for sundry handymen and delivery boys. And lastly we are rather chuffed to be collectors of eclectic things that often leave visitors muttering “interesting”. Though, when we saw the apartment for the first time, it was mired in ornate furniture, heavy mouldings and unnecessary levels.

The tepid palette and polyester curtains only added to its misery. But what struck me was that the bones of the double heighted duplex were clean, simple and naturally lit. I wanted to leave this open airiness untouched. So, we stripped it of its unattractive encumbrances and built the decor around its functionality.

To provide a contrast to the clean structure, I infused it with theatre and visual intrigue, starting with a statement at the entrance that was striking and whimsical.

That is how the lady in red became the leitmotif of our abode. Across the stairs, she stuns every time one enters. When you walk in, the living room to the left and dining area to the right visually appear as one composite space, owing to the use of glass partitions.

The starkness of the pristine walls here is layered—a play of graphic patterns, metallic accents on deep charcoal and the contrasting textures of silk, velvet and leather—yet complements the drama of unexpected artworks suspended from the ceiling.

The leather sofas in the living room continue to stay only because they have aged wonderfully and absorbed the antics of Wazza and Henry as well as animated aberrations of friends and family. Those seated on the couches have a direct line of vision into a glass corridor that leads to the master bedroom upstairs. To enhance privacy, I created a laser cut film and pasted it on glass to create a screen. In fact, the existing one emerged when the original film just didn’t look right.

Heartbroken, I had asked the contractor to peel it off. As he was doing so, the laser cut motifs began to leave behind a spherical pattern. Voila! Just what I wanted. We added lights to project “the mistake”, also because I fell in love with the shadows it created.

Our place has evolved over the years. It has shed skin, stuck to its spirit and attuned itself to the needs of our growing boys, dogs and collective whims. But there are still a few of our favourite things that continue to give us great joy.

Topping the list would be the installation called One Thousand Tears by Suchitra Gehlot, made of tiny medicinal bottles bearing a one-word reason for the last time someone cried.

The labels “Dentist” and “Mother-in-law” always evoke heartfelt confessions! This would be followed closely by a monochromatic portrait of Madonna by Herb Ritts and a shot of Andy Warhol’s entourage, including “Factory Girl” Edie Sedgwick by Steve Schapiro.

They belong to a collection of treasured black and white photographs that provide the perfect foil to the slate grey and magenta den. And lastly, it would be the lush green terraces accompanying each room that house—among its flowering frangipanis and blossoming mandarin oranges—a barbed wired installation with John Lennon’s immortal words, “You may say that I’m a dreamer but I’m not the only one”.

You may also like: The Los Angeles style villa by Sanjyt Syngh