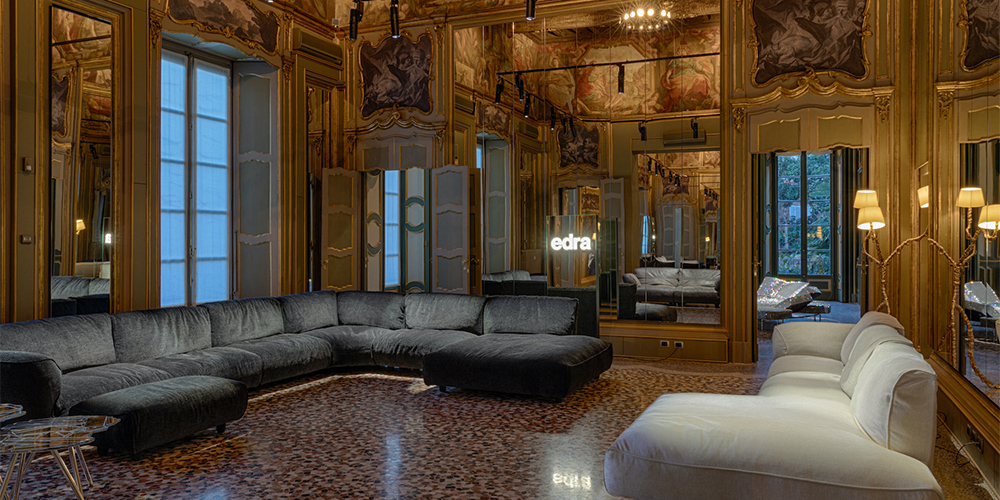 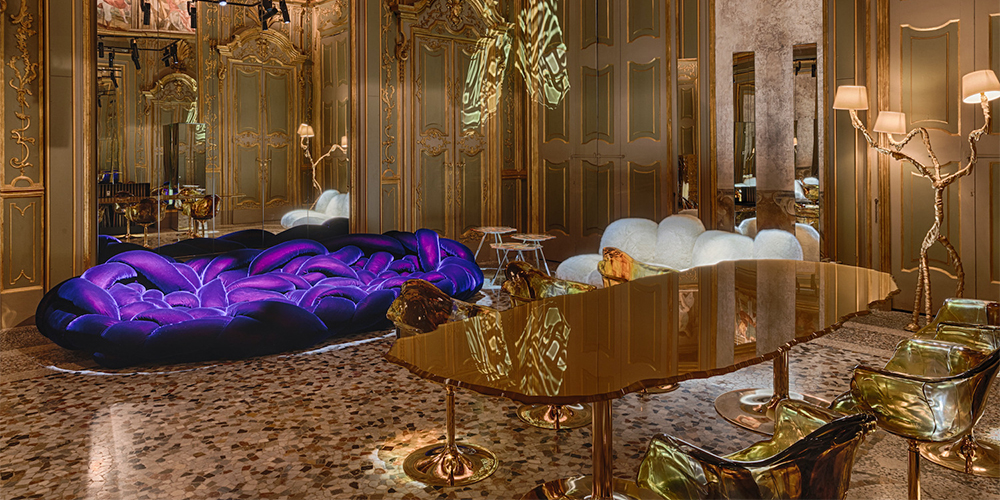 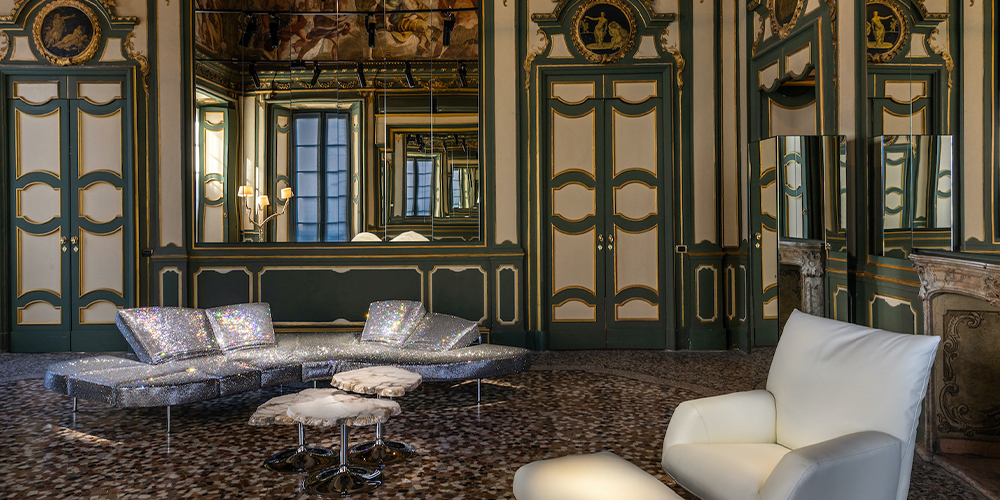 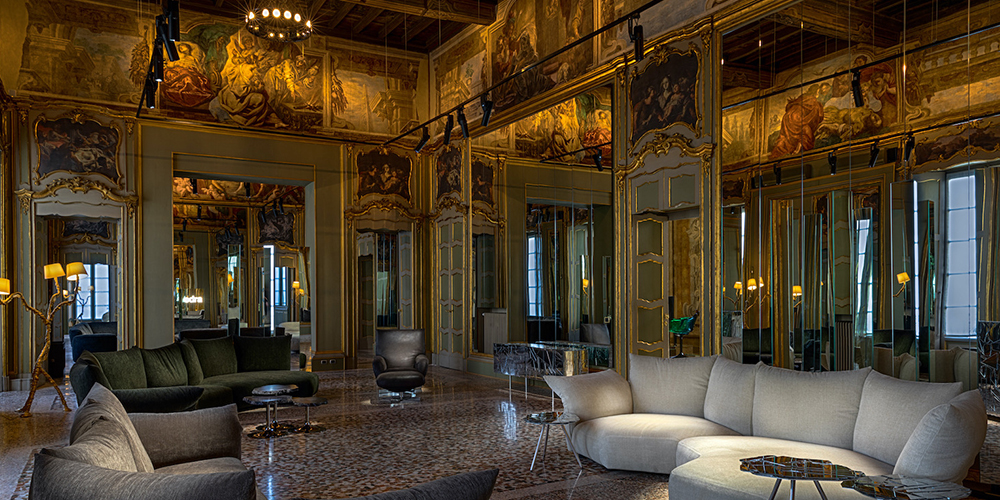 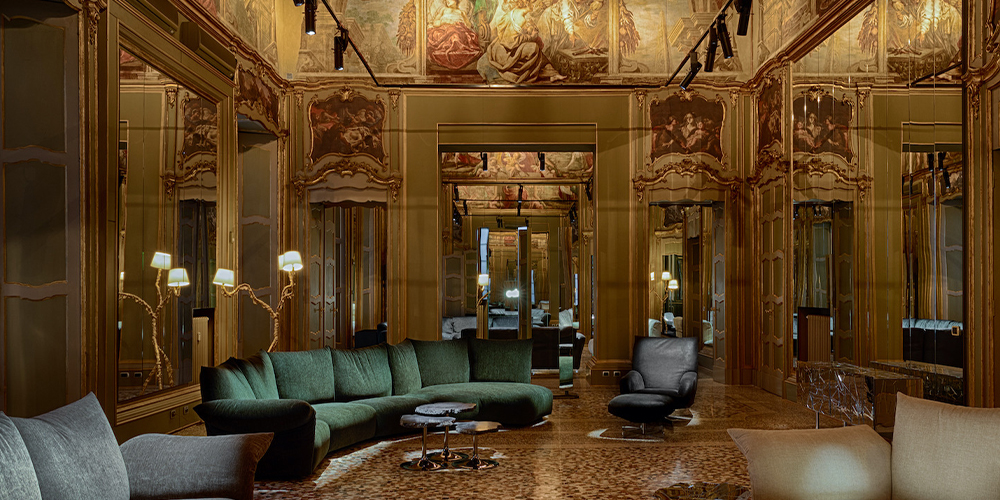 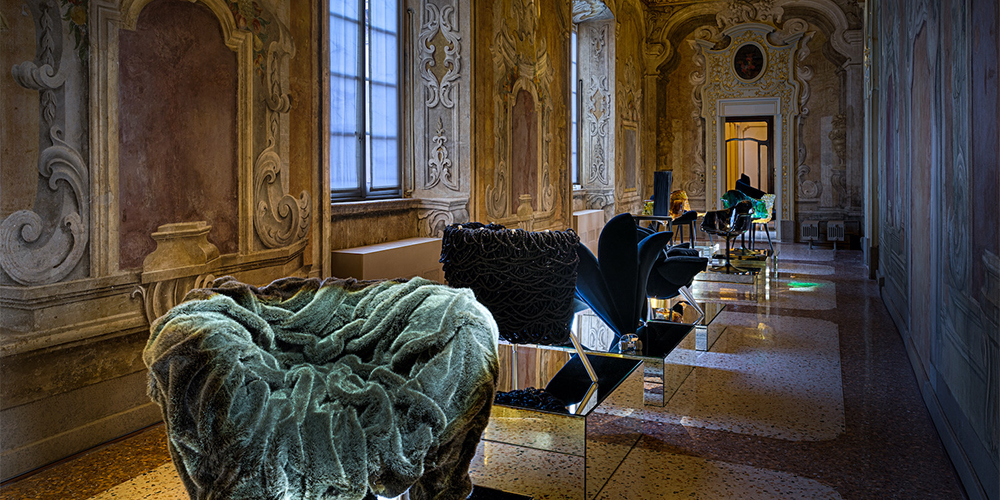 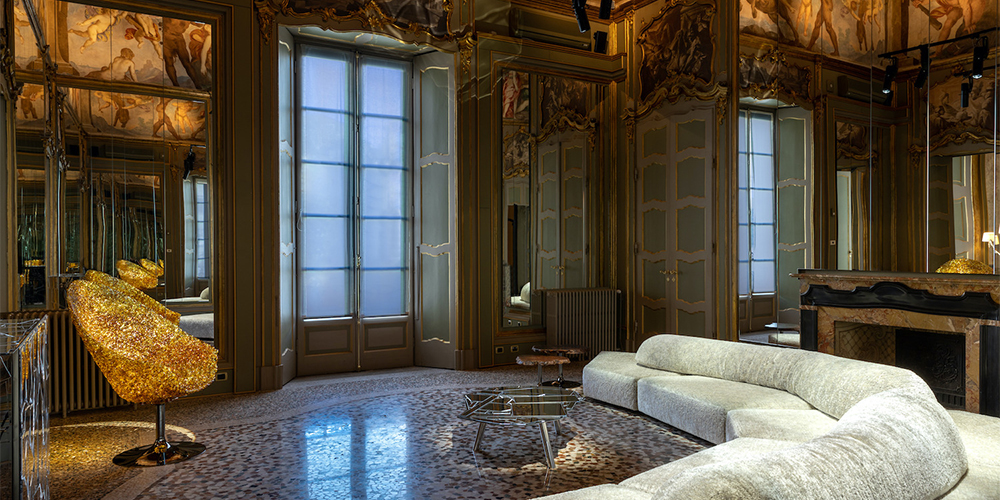 Creating an anomalous juxtaposition between the yesteryears and present day Edra's furniture evokes life into the venue; Photographs courtesy Edra 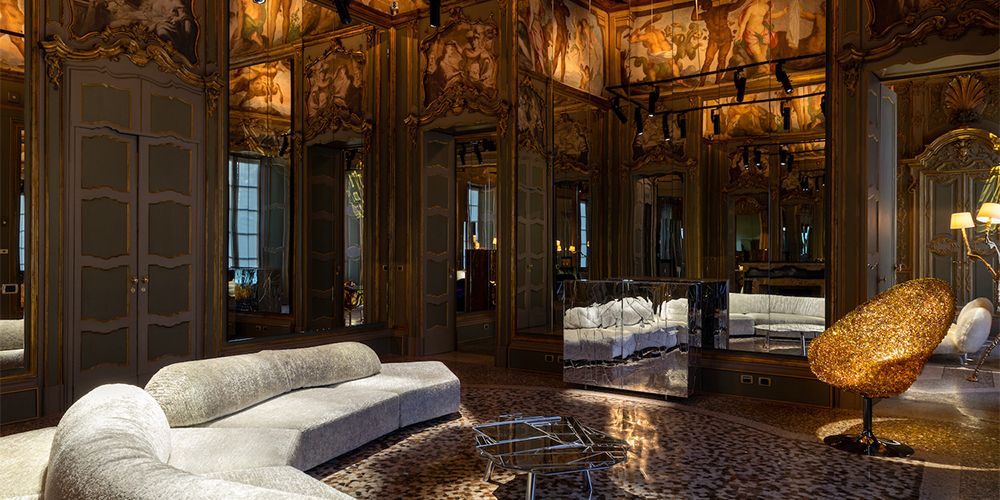 The curation of the furniture inside the dingy venue brings out details of the contemporary pieces; Photographs courtesy 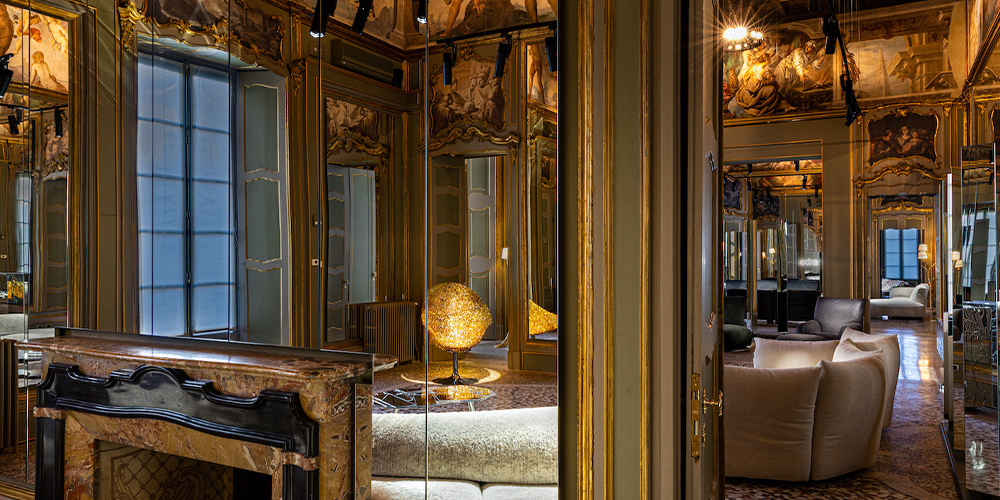 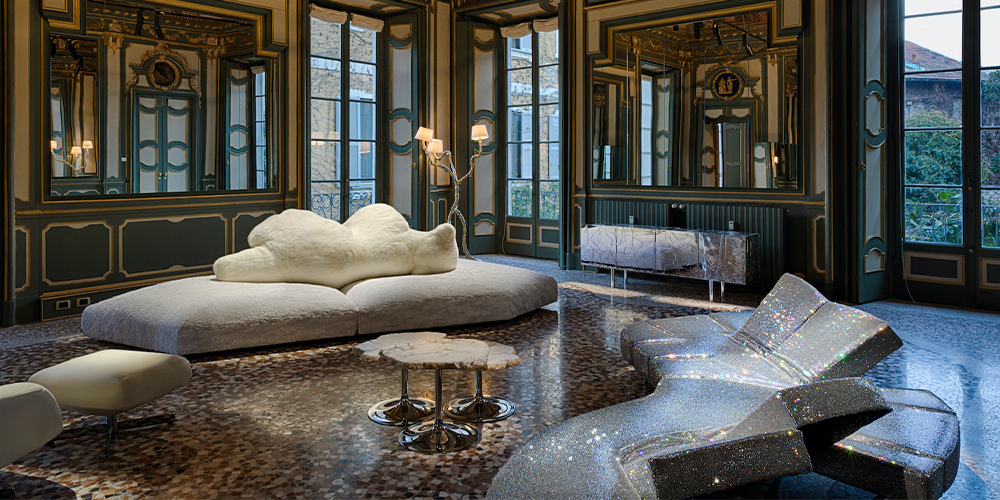 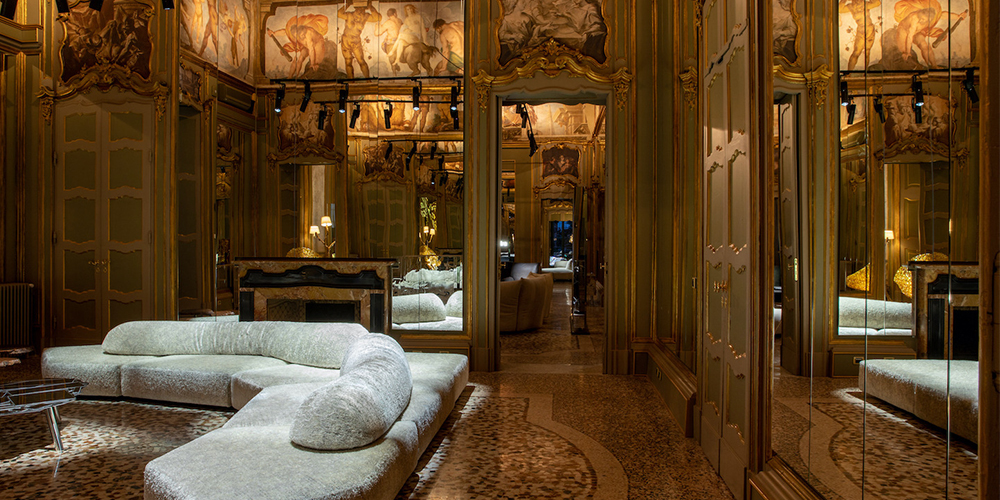 Mood lighting at Palazzo Durini brings out the details of the artwork on the ceilings and walls; Photographs courtesy Edra 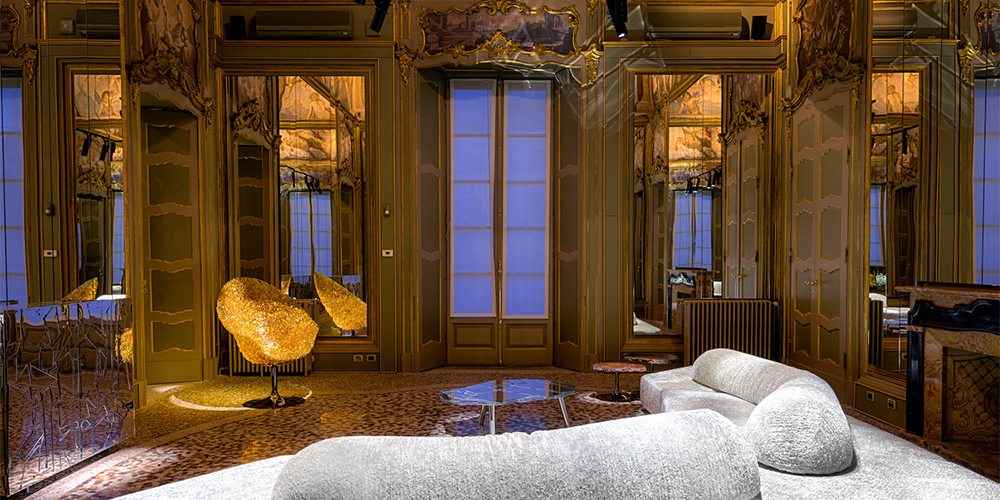 Heritage and history are pivotal contributors to culture and by extension, to design—making architecture the only medium to time-travel to the past through the lens of today. Recently, the mosaic-tiled floor of the venue was the ramp to Vaishali Shadangule, India’s first female designer to showcase at Milan Fashion Week. In the collision of the former with the current, the gates to discourse about timelessness, history, culture and existing contrasts are pushed open.

The Palazzo Durini Caproni di Taliedo in Cantarana district at Porta Tosa of Milan, currently acquired by luxury Italian furniture brands—Edra and Vago Forniture—houses collections of sofas, armchairs and furnishing accessories from Edra under its frescoed ceilings and baroque-style arches.

The Palazzo Durini Caproni di Taliedo, Milan, has been fostering art ever since it was built in 1648 by Francesco Maria Richini, who attributed innumerable marvels to Milan’s architecture, starting with the Cathedral of Milan in 1605. Gian Giacomo II, the successor of an affluent silk and gold merchant, commissioned Palazzo Durini and also the painted decorations of the piano nobile to up-and-coming Milanese painters, which is now home to Edra’s pieces.

While the grand 18th-century staircase, to the piano nobile, was relocated from the Palazzo Arnaboldi in 1939, the ceiling’s “The Chariot of Apollo” was sculpted by Emilio Monti in the Thirties. Inspired by Greek and Latin literature, such as Ovid’s Metamorphoses and Sophocles’ Trachiniae, the frescoes on the piano nobile tackle subjects of love, fate, heroism, reason and instinct.

At the very entrance, Tatlin, a low-height, midnight blue sofa from Edra stands as an anti-thesis to the muted tones of “Triumph of Bacchus” and Arianne by Pietro Maggi, commissioned by Gian Giacomo III to renovate the space in 1714. G.Gallinari’s trompe l’oeil, a hand at revamping 18th-century figures of Apollo, Mercury, Ceres and Diana, add cheekiness to the installed free-standing mirrors of the vestibule.

Following the vestibule, a lingering corridor called the “Wedding of Heracles and Hebe” Gallery by Pietro Maggi, a paradigm of late baroque conceived during the renovation, intrigues with will-o’-the-wisp cornices and the double-barrel vaults. Edra’s Getsuen, Grinza, Rose Chair, Vermelha, Blue Velvet, Ella, Ella Anthracite, Ella Gold, Gilda B, Gina, and Jenette make up for the tangibility in the space.

Gian Giacomo II’s mother, Margherita Visconti Durini‘s bedroom, called the Bacchanal Hall or wood room by Storer, stars a ceiling by Legnanino done in 1711. From Edra—Pack, Flap Diamond, Chiara with pouffe, Ines, Cicladi, and Scrigno establish a neutral palette, which doesn’t take away from the intricate ceiling, as the furniture’s dynamic form brings out the potential of the space.

Grande Soffice and Brasilia from Edra grace the “Dido and Aeneas” Hall by Melchiorre Gherardini, while Standard from the collection marks its presence in the  “Meleager Cycle” Main Hall by Storer. Christened after “The Tragedy of Hercules and Deianira” painted in its interiors by Ercole Procaccini, the Herculean Hall is populated by On the Rocks and Margherita, and the Achilles Hall, named after “The Life of Achilles” by Stefano Danedi, etched in its walls, sports Boa, Cipria, and Egeo from Edra.

The 18th-century ornamental panels on and over the doors throughout the venue were the last intervention the family could afford before selling it in 1922. Following this, the building saw numerous owners and refurbishments, including reconstruction by architect Attilio Spaccarelli, after severe damage in the Second World War. Giuseppe Caproni di Taliedo, an aeronautical pioneer and avid collector of futurist arts, and his family steadily secured funds to restore the palace to its former glory between 1994 and 2010, and today in 2022, courtesy of Edra the venue is open to the public who can now feel the pang of the historical events.

You may also like: Vaishali Shadangule’s delicate Indian weaves captured under the ocean exhibited at Jamaat Art Gallery