; Gudliya Suite at City Palace Jaipur is now on Airbnb

Gudliya Suite, Jaipur City Palace on Airbnb — Come for the art and architecture but stay for the stories 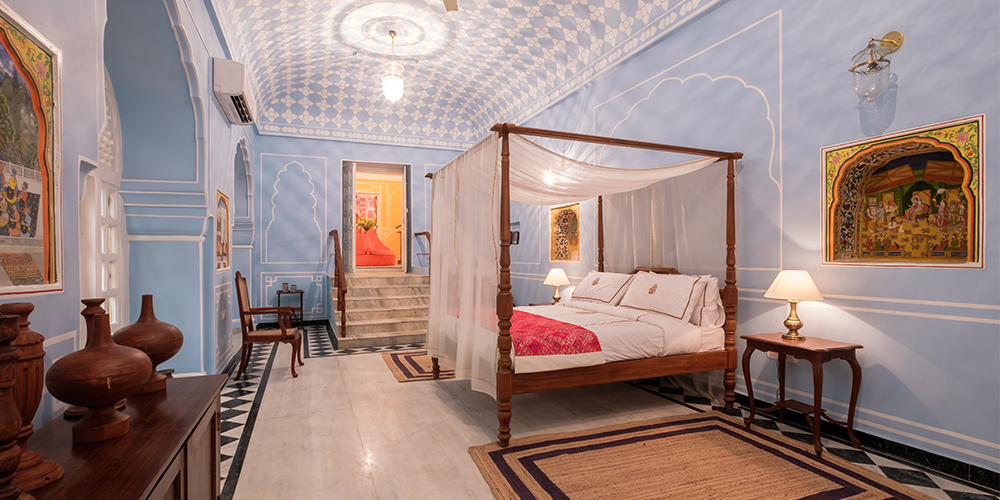 Translating to a small chariot, the Gudliya Suite within the Jaipur City Palace walls once housed the royal zenana. With the passage of time it played host to guests of the royal family till it opened doors to civilians who can experience a slice of history as the suite is now listed on Airbnb. It is tucked behind an arcade that cocoons it from the cacophony of visitors yet keeps you just a stone’s throw away from accessing the premises.

In many ways, the 300 year old Gudliya Suite metaphors the capital city. Jaipur is symbolic of beauty, success and aspirations by virtue of its former glories that it continues to wear with pride. It is home to unmatched architecture, flourishing trade, the arts and myriad crafts that continues to prosper years after its foundation in 1727.

The suite, listed on Airbnb is resplendent in vibrant colours, art and artistry as a stunning emerald lobby offers a picturesque peek into the room with latticed jaalis framing an outdoors verandah. Probably planned as a series of frames, the arches outline an opening that gives a hint of the space. The experience is captured in a matter of seconds as one enters the room with a four poster bed adorned by blue walls and an arched ceiling. Continuing the narrative of framing spaces is a walk-in wardrobe that leads to the bathing areas. But keeping the best for last is a serene swimming pool that is designed along the lines of a Turkish hammam that reflects it’s coral walls and arches.

But in all certainty, a quick Google search may reveal all the aforementioned details — of the histories and glories that are on offer. But the walls and chambers of the city palace are shrouded by much more than its museums, durbar halls, galleries and the many chambers. It is home to stories and ideas that transpired centuries ago that mark the beginning of a truly modern and evolved city. Like, the founder, Maharaja Jai Singh II observed the stars from Amer, the prior capital of state. Upon probing his mother with questions about the celestial bodies, the Maharani commissioned tutors from across the country to educate the future king and founder of Jaipur. And as the future unravelled, the king went on to build five observatories across the country.

While the city is known for its valour and cultural contributions, rightly encapsulated in the experience that the City Palace offers, it is these stories that come to the fore as the user spends time within the Gudliya Suite. Its royalty is known for their narratives of successful rule and expanding the boundaries of the region but they also harbour stories of camaraderie and unity amidst the Mughals and native kings who joined forces to oppose foreign rule. But coming back to all things art and architecture, the precinct also mirrors the marriage of multiple cultures and global inspirations that intermingle and make the palace and suite as it stands today. Take cue and head to Gudliya Suites enroute Airbnb for an immersive experience steeped in legacy and artistry.