; Arpan Shah of Modo Designs has reimagined urban living for a family 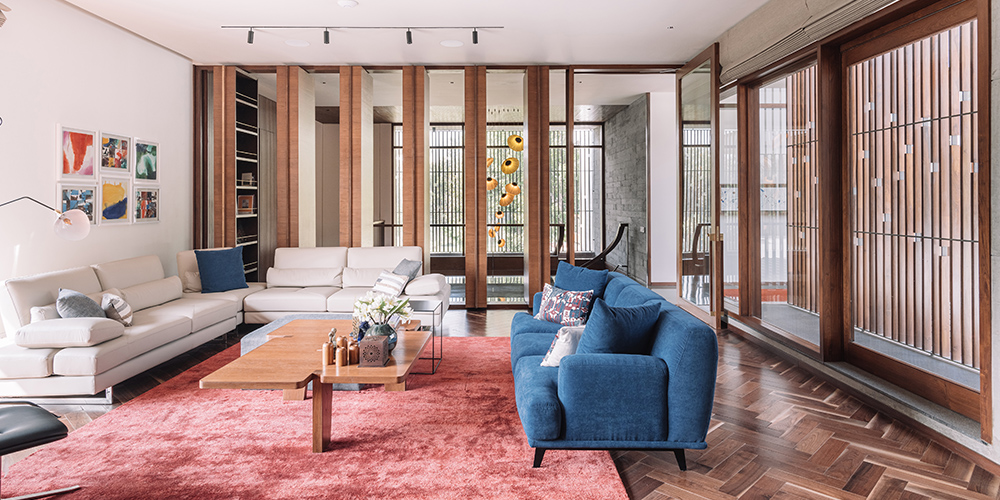 Blush pink rug complements the wooden flooring. Wooden panelling draws the theme of the house into the living room; Photographs by Ishita Sitwala 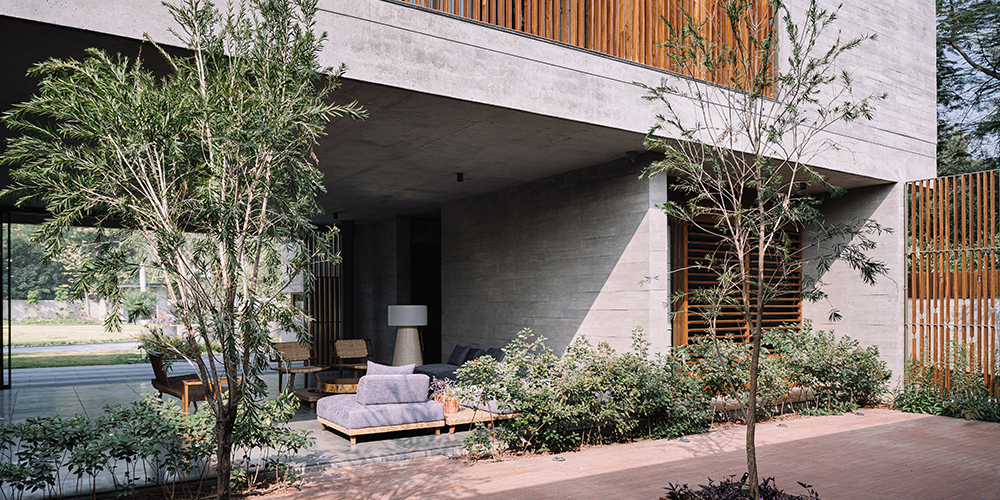 While wood and concrete serve as the base palette of the design, the plentiful presence of trees around the house brings warmth to the designs and gives it a natural touch; Photographs by Ishita Sitwala 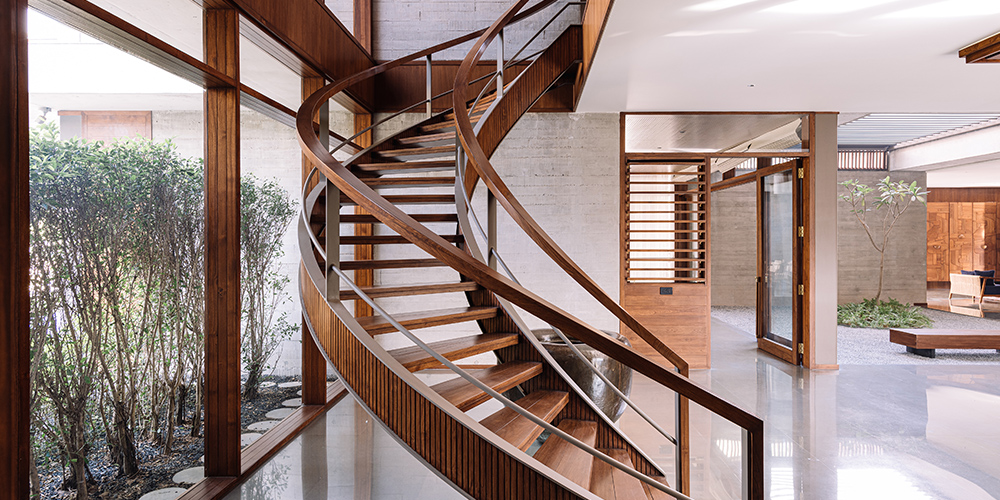 A circular staircase, sculpted out of a shell of mild steel and housing timber treads, is the central feature of the dining space. Modular kitchen by Hacker and Kitchen appliances by Miele & Siemens grace the adjoining kitchen and pantry spaces; Photographs by Ishita Sitwala 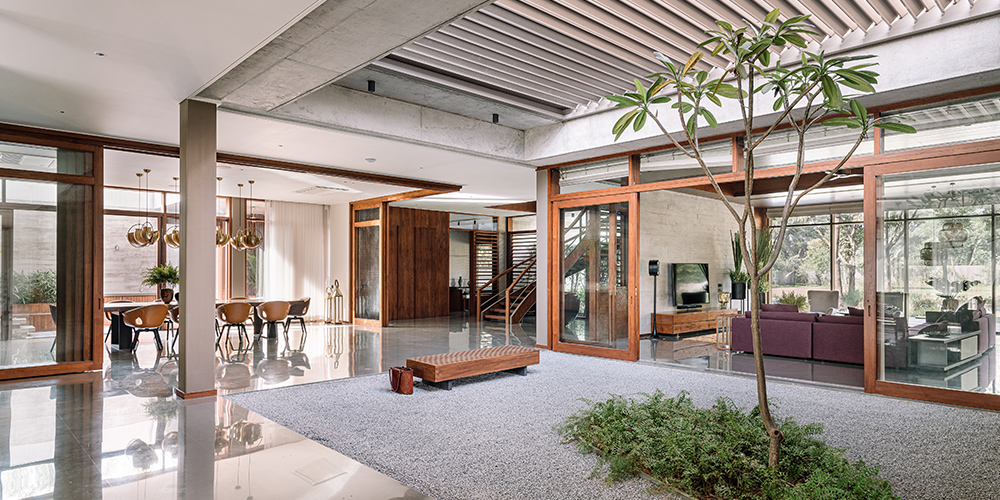 To ensure privacy and security, the architects added louvers to the designs. The glass panels visually open the indoor spaces while providing protection from rain and dust; Photographs by Ishita Sitwala 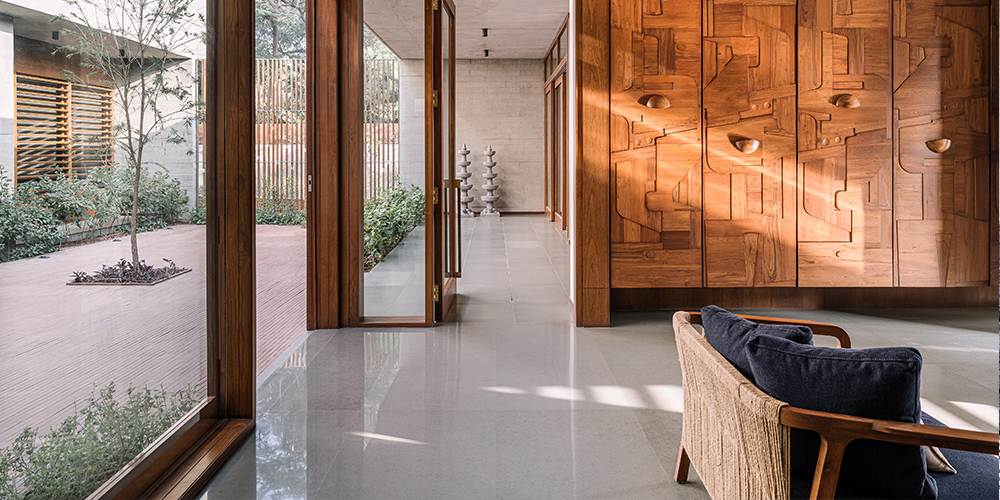 Solar panels installed on the first floor are the main power source of the house. Automation keypad by Moorgen, lighting fixtures by Futura Light and switches from Hager form the key functional elements; Photographs by Ishita Sitwala 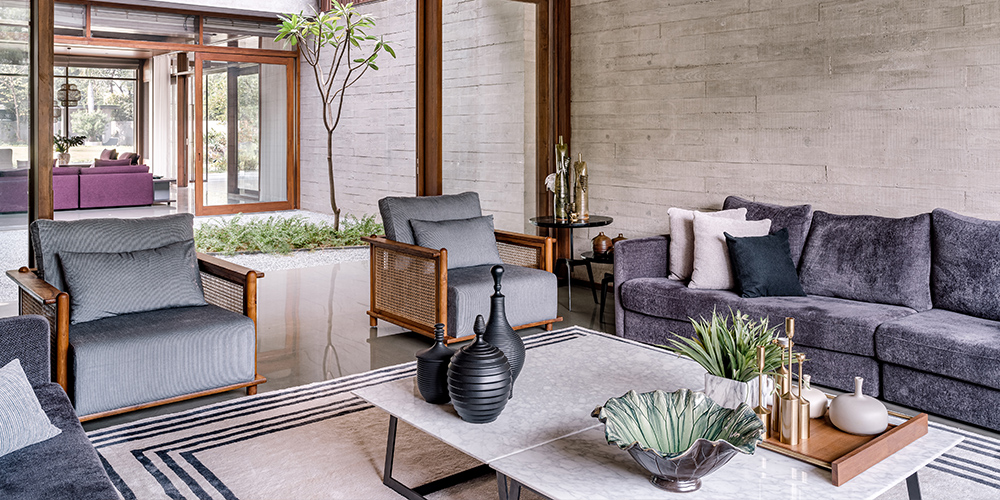 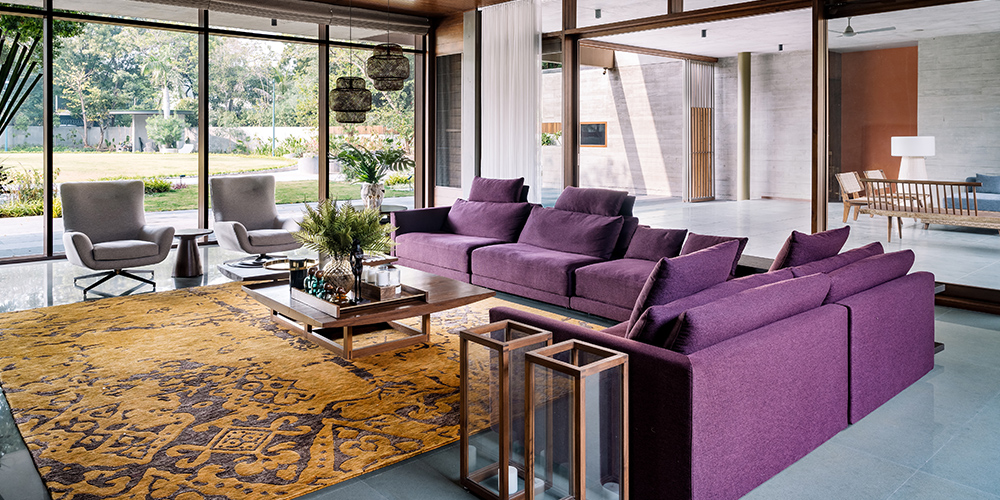 Initial design planning involved mapping all the trees around the space. The layout was mindfully designed around the flourishing flora; Photographs by Ishita Sitwala 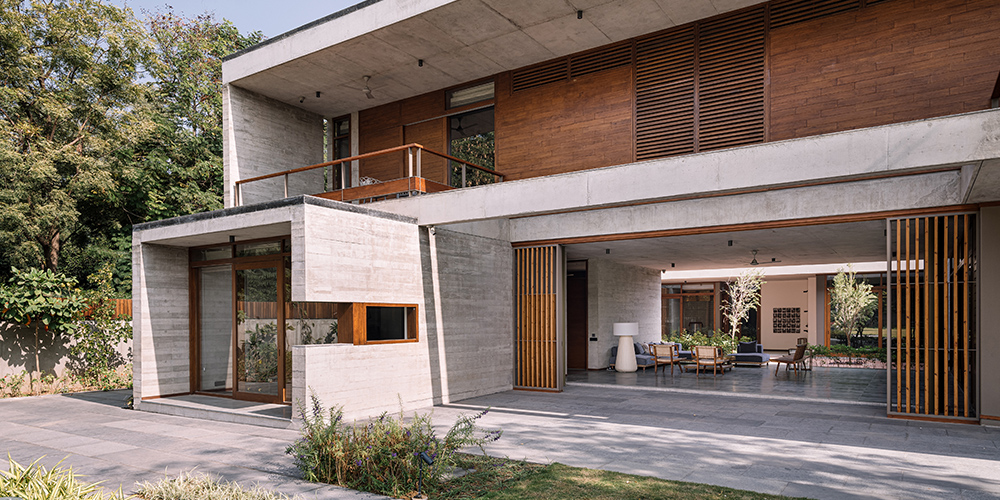 Strategic tips from traditional Indian architecture enabled the designers to lower the energy consumption around the house; Photographs by Ishita Sitwala Amba courtyard, an extension of the dining room is reminiscent of vernacular architecture that serves as inspiration for the design of the house; Photographs by Ishita Sitwala Bespoke brass and wooden details, meticulously designed by the in-house architects and locally crafted by skilled artisans, break the monotony of the gray palette in the living and dining spaces; Photographs by Ishita Sitwala Unrestrictive, open space around the formal living room is great for hosting family events and entertaining; Photographs by Ishita Sitwala Almost all indoor spaces flow into verandahs where an interesting play of natural materials and textures render a unique personality to the space; Photographs by Ishita Sitwala Contemporary reimagination of traditional Gujarati Architecture, the designs are inspired by the ‘pols’ of the heritage city. The unlit indoors with green details creates a warm, natural environment in the living room; Photographs by Ishita Sitwala Customised sofas add colour to the monochrome palette. The tailor made brass and wooden lamps bring flair to the exposed concrete walls; Photographs by Ishita Sitwala Centered around a series of courtyards and verandahs, the layout of the house was designed to allow ventilation and natural light into the house. The tactful design helps to keep energy consumption low; Photographs by Ishita Sitwala Polished natural kota stone floors feature throughout the house and the entrance. The locally sourced stone seamlessly blends into the gray palette of the house; Photographs by Ishita Sitwala Honouring the clients wishes, all bedrooms of the house overlook courtyards, facilitating ample ventilation throughout; Photographs by Ishita Sitwala A monolith mass of exposed concrete, this family abode is designed around the natural foliage; Photographs by Ishita Sitwala East facing front porch of the expansive adobe lets in ample morning sun. Lush mango trees surround the house and are an integral part of the layout; Photographs by Ishita Sitwala

With a deep-rooted focus on openness, the Inside Out House located in Ahmedabad pays homage to modern materials and sensibilities. Principal architect Arpan Shah of Modo Designs with interior design studio Anarr Gunjaria Interiors have reimagined urban living for a family by showcasing an ensemble of material exploration and customised installations. Spread across a mammoth 12,600 sq ft area, the weaving of open, semi-open and indoor spaces into an expansive sprawl is a substantial architectural feature of this house.

Following the owner’s brief, Shah incorporated archetypal Indian courtyards in the house that flawlessly unified with the internal spaces. He made sure the house was airy, all bedrooms overlooked the backyard yet addressed privacy and security concerns. As a tipping point, he made a map of the existing trees on site and curated a layout that would preserve them.

Throwing light upon the theme of the space, Shah divulges, “The central bay comprising the courtyards is a contemporary interpretation of dwellings in the pols of the old city of Ahmedabad. While the courtyard in the vernacular houses was more an introvert feature, here the courtyard begins to connect to the rear garden through verandah and open living areas giving it a bit of an extrovert character as the western Ahmedabad allows bigger land to open up.”

Inside Out House is a monolithic mass of exposed concrete paired with wooden doors and windows. The flooring entails rough and polished natural Kota stone. While the common spaces open up through glass doors, the bedrooms have wooden doors and louvres to allow privacy and reduce heat gain. The use of wood instills a sense of warmth and its contrast with the stark cold concrete balances the space with immaculate precision.

Comprising three courtyards, the central bay allows the house to be inside out. These courts are an extension of the dining area that has an existing mango tree. The front bay is a single floor, while the mass at the upper level gets built up on the rear bay, allowing a depth of form from the front entry court. Introducing these dual courtyards which segregated the front and rear bay was a challenging aspect of this layout due to security and climatic concerns. Elaborating further, Shah reveals, “The inner court which is archetypal Indian space and where living, dining and formal drawing opens, had to address issues of security, rains and dust. This security and privacy concern is addressed through wood screens that complement exposed RCC.

Starting with the east-facing entry porch, one enters into a vestibule through the central part of the front bay. The vestibule opens into the outer court and has a working studio and puja area on its right side. On the left side is a formal drawing area that can be accessed through a semi-open passage adjoining the inner court. One further walks down to reach the dining and kitchen areas. The passage wraps again to the right side and leads to the living area which is between the inner court and the garden.

There is a spiral staircase adjoining this living area which leads to the three bedrooms and lounge space above. At the southwest corner, a guest bedroom overlooks the garden. The northwest part of the house which can be accessed from the vestibule and crosses the open outer court is the verandah, a gym and spa room. Moving through the vestibule, one senses the expanse, flow of spaces and the light filtering into the courtyards and the sky above. Finally, the semi-open verandah between the outer court, rear garden and extension of the living space makes for a family hangout spot.

Inside Out House is designed to interact with the lush green outdoors, thus creating a synergy between the organic and the opulent with neither overpowering the other. The house displays an inherent richness in every material and detail. By keeping the essence of the raw site intact while introducing contemporary techniques, Shah with his team of designers, consultants and contractors crafts an outstanding space.

If this extensive house by Arpan Shah appeals to you, we bet you will love The Floating Frame House designed by Rushi Shah and Vidisha Shah for RSA + Tattva!