; Designer Shivani Dogra with a couple crafts retreat in the Meghalayan hills 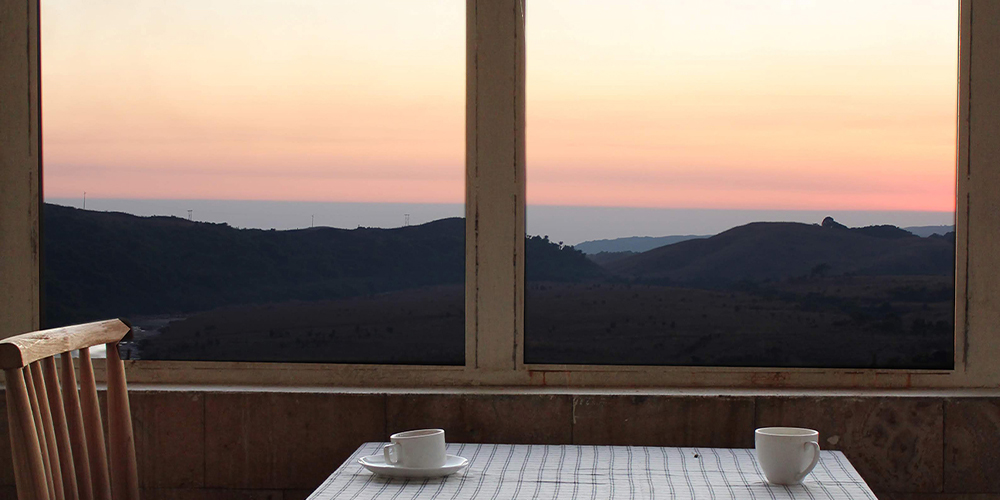 Sourced from Delhi, handmade tiles in the dining area reflect the green tones of the landscape and blend with the other natural elements such as stone and pine wood. The space is styled using locally found hydrangeas, cotton tablecloth and sieves from the local market; Photography by Shivani Dogra 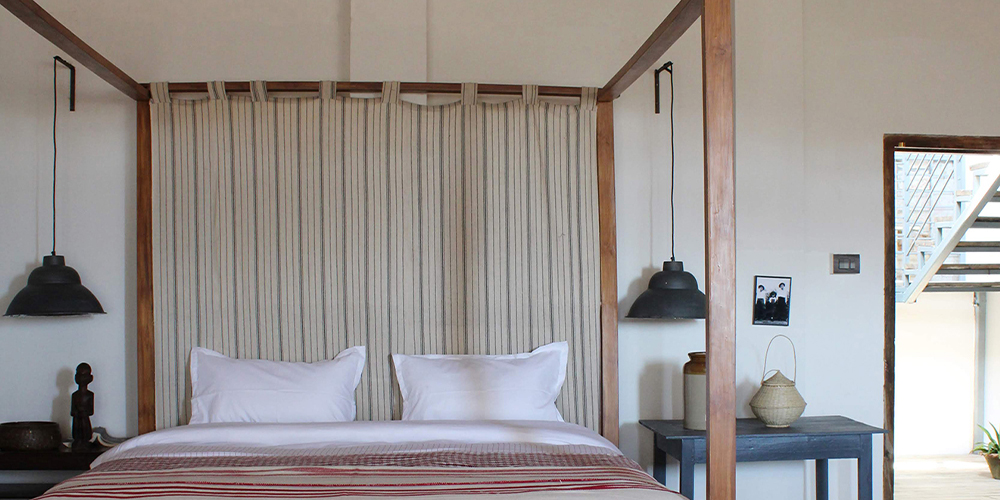 The lower-level bedroom sports a Khasi pine floor while the lights are sourced from Delhi; Photography by Shivani Dogra

Sohra, or Cherrapunji, hidden in the ancient hills of Meghalaya is a place of stories and legends. The ancestral land of the Khasis and serenaded by thundering waterfalls, the region enfolds its inhabitants in mist-shrouded secrets and folk tales. Sai Hun Lang’s own heritage is entwined with this tranquil corner of north-east India and when she was gifted a 69 acre plot by the tribal council—of which her family is prominently linked, she dreamt of building a home on it. Lang and her husband Atanu Rakshit, a professor of economics, live mainly abroad but spend time in Sohra twice a year where they are surrounded by family and friends. With a desire to incorporate as many traditional Khasi elements as possible, the couple engaged Delhi-based interior designer Shivani Dogra who they felt understood the rhythm and qualities of the region in a rare way.

Traditional Khasi houses are fashioned from Sohra stone, bamboo, thatch and mud. Usually raised on a plinth, they are rectangular with a roof reminiscent of an inverted boat. The houses are comparatively small, with a kitchen, living space and one or two sleeping rooms. A few large houses have five partitions, one behind the other.

In low-lying areas, walls are wooden or sometimes mud-plastered bamboo while high in the mountains, stone blocks of Sohra stone are used. There are only a few traditional Khasi houses in Sohra today and Dogra was inspired by the brief to reinterpret the time-honoured style for a modern lifestyle.

Stone is a sacred part of Khasi consciousness. The word Maw (stone) is used liberally as a prefix in the naming of rivers, valleys, villages and hills. It felt a reverent starting point to use Sohra stone as one of the two main components in the construction of this home, alongside supple and fragrant Khasi pine—an indigenous variety.

“The interiors are designed from the point of view of blending in rather than standing out,” reflects Dogra. She explains, “The design was inspired by the traditions of the Khasi tribe and the form and colours of the surrounding landscape. I wanted them to communicate ‘rootedness and ease’— qualities that I felt are definitive of Sohra.”

Staying in Sohra for an extended period of time allowed the designer to gain a deeper insight into Khasi culture and allowed time to reflect on the challenge of creating a truly respectful space.

“The simplicity of their rituals and the stark beauty of the landscape inspired an earthy and meditative aesthetic,” shares Dogra as we wander through the light-filled rooms, which seem to be an extension of the moody hills beyond them. “The furniture and soft furnishings are purposely unadorned,” she adds. Engaging local tribesmen to handcut the stone and wood was important to the couple and some walls were constructed by masons using the dying local technique of dry stone walling.

“We combed the local markets, which draws tribes from all around the region, to find handmade, tribal kunups or traditional rain shields, grain sifters, ornamental bows and arrows and tactile floor mats for the interiors,” muses Dogra. She continues, “I was drawn to the local hand-spun cotton and khadi fabric in checks and stripes patterns.” These bold patterns, which are traditionally favoured by the Khasis, are used for the curtains, upholstery and bedding sitting next to textiles sourced from Delhi, Nagaland and West Bengal.

Local villages produced the woven floor mats while, according to Dogra, “The river that ran through the property yielded bounty in the form of driftwood, smooth river stones, wildflowers and grass.” This deeply natural approach to the decoration is intentional, contemplative and in tune with the call of the local land. It is complemented by the nods to the couple’s ancestral heritage with heirloom bell metal utensils and family photographs strewn throughout the rooms.

The poetic qualities of Dogra’s design has intuitive roots in the words of the Khasi poet laureate, U Soso Tham ‘High on the pine the Kairiang sings about the old the long lost past, sweetness lies just out of reach’. Here, in this soulful interior, the sweetness has been restored, along with a love song to a tribal inheritance.

You may also like: This Mumbai home by Studio Nishita Kamdar