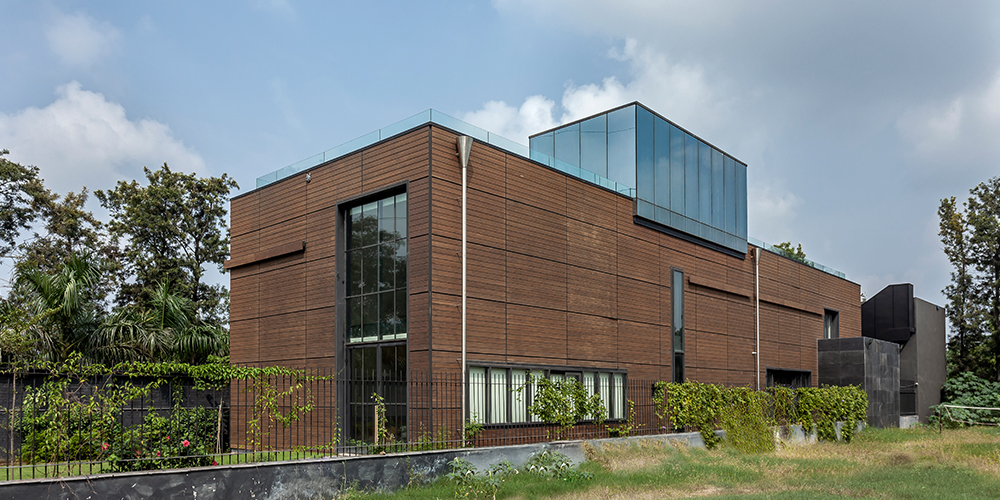 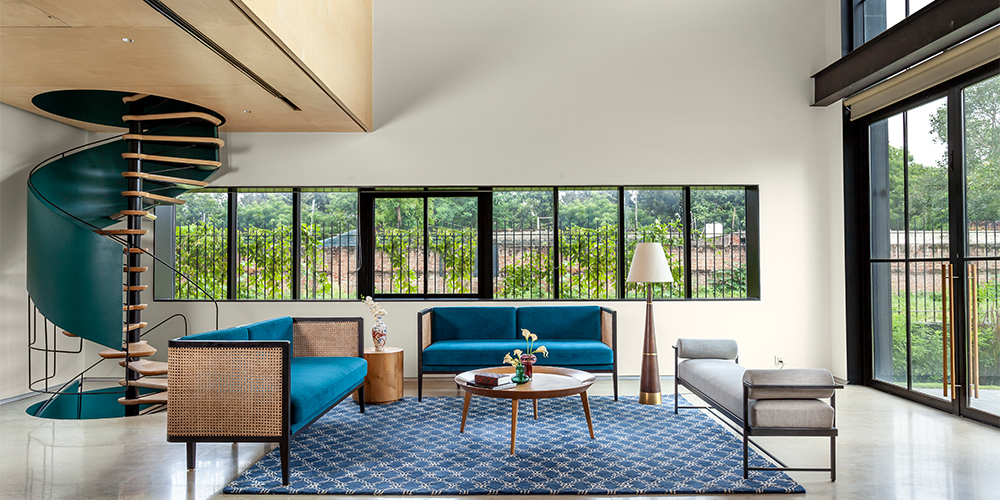 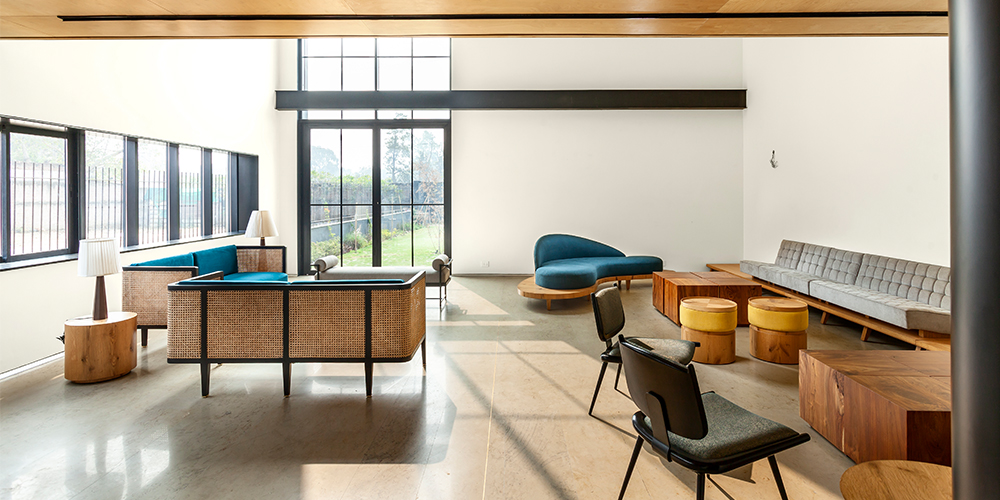 The formal and informal living areas 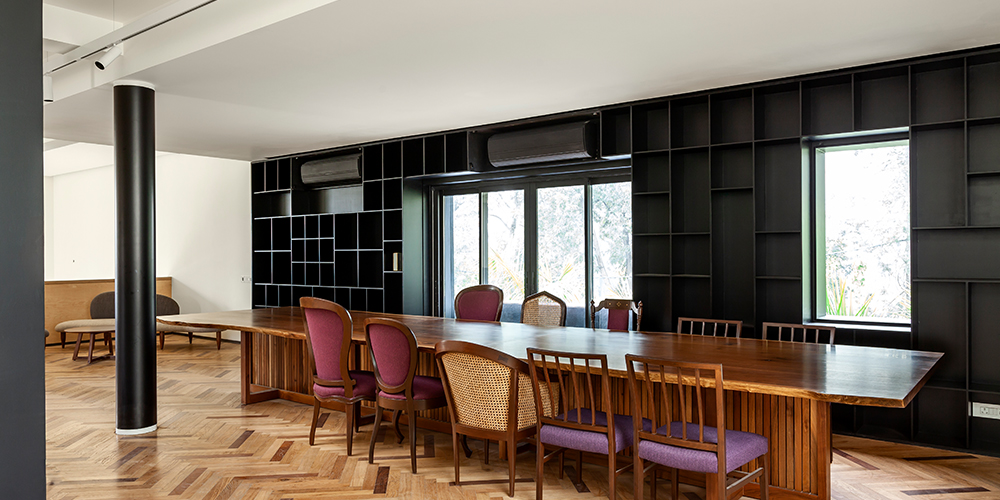 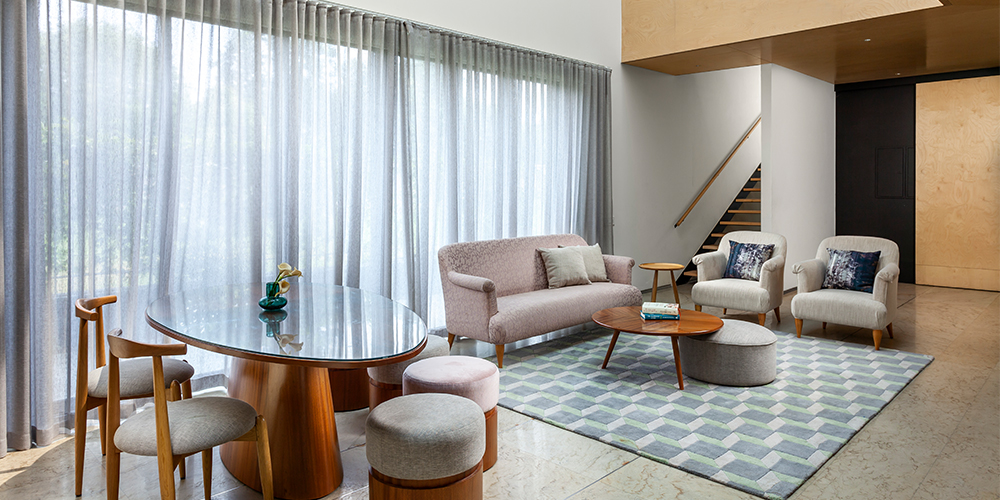 A cosy seating corner in the abode 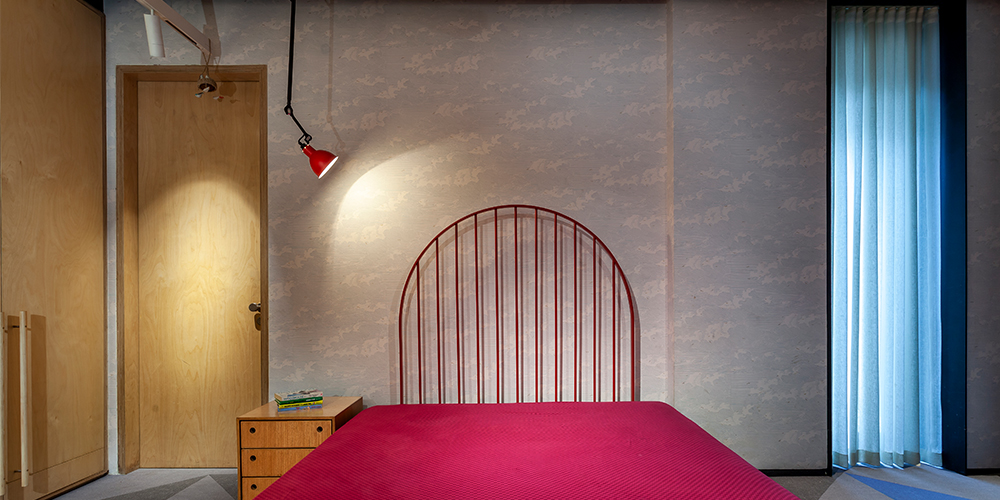 The kid's room amplifies pops of colour and geometric patterns

Divergent with its minimalistic facade and clean lines is this home designed by Akshat Bhatt, Principal Architect of Architecture Discipline and designer Chandni Saxena. The home—which took three years from concept to finishing—is inspired by Le Corbusier’s Villa Petit and is planned with natural light, clean air, an open floor plan and opulent interiors. Cloaked in meticulous timber grids, the exteriors are planned such, that they mirror the gradual ageing of its facade.

Bhatt explains, “The idea behind using timber was to add the warmth of a timeless rural home. It is reminiscent of old barns and village homes. Even though the building is a straight and clean timber box, it is sharp and will react to organic change. While glass and steel are elements that will stay true to their form, the timber will turn grey as it reacts to the environment.” The bohemian landscape dips into nature with lemongrass and seasonal flowers that mark the boundary of the home. Just one step inside evokes a sense of familiarity and homey charm.

The deliberately designed low ceiling at the entrance gradually escalates from seven to 22 feet, opening up to a spacious floor plan that features two distinct areas: private and public. A real and minimal narrative is seen throughout the home. The living room extends to the family recreation space as well as connects to the dining area via a vibrant and vivid spiral staircase with metal wrapping, which is inspired by the dynamic, 19th century architect Pierre Chareau.

Overlooking the front lawn is the dining room, which houses a large table that accommodates up to 40 people, a fascinating minibar and parquet flooring in three colours. “The overall palette is mute yet timeless. In neutral spaces, colour is used to traverse through different moods,” adds Bhatt. Customised with seating and toddler play rinks, the lush garden is the epicentre of calm and serene natural light that diffuses through a six metre high, contemporary glass facade. Unlike typical homes, the swimming pool is placed on the rooftop as opposed to on the ground level.

Accessed through an elevator and equipped with a home theatre, giant cellar and riffed with storage is the concealed basement—it serves as the perfect escape for gatherings and celebrations. The meticulously planned bedrooms are tucked away into the private end of the home. These have been crafted to suit each inhabitant’s needs with simplicity. While the master suites amplify space and house traces of native elements like the traditional Indian palang, the kids’ rooms are done up in bright colours and geometric patterns. “For the children’s rooms, the flooring is a melange of carpets. To create a variation and add some character to the space, the flooring has been inspired by the Chinese tangram puzzle,” shares Bhatt.

Since Architecture Discipline’s focal point when designing is always light, the home is enveloped using mirrored glass as well as an apex skylight on the pitched roof. While the former lends dynamic facets to the space, creating a medley of diffusion, patterns and shadows; the latter is left open in the winter to allow the inflow of natural light. “I like to develop the use of the building together with the client, in a process, so that as we go along, the design becomes more intelligent,” concludes Bhatt.