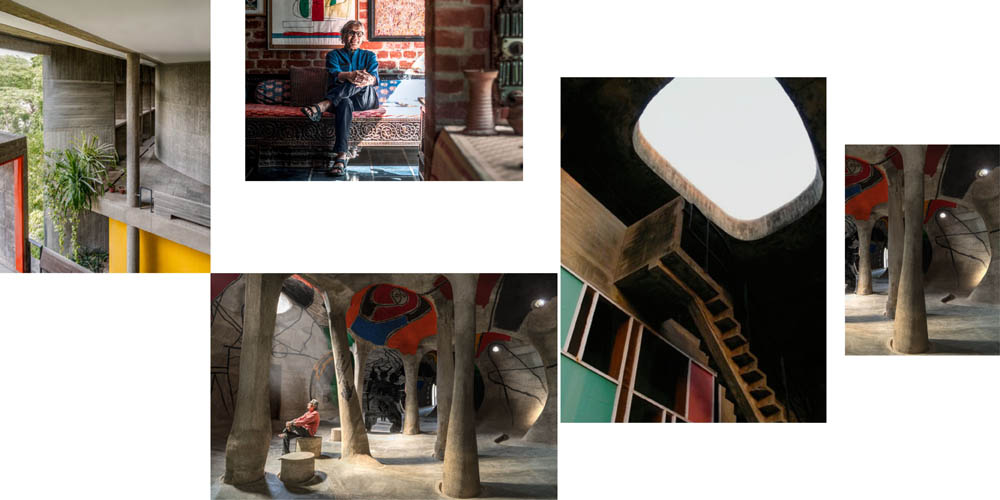 (L-R) The Mill Owner’s Association Building (left) and Villa Shodhan (right) in Ahmedabad are structures that remain close to the Professor's heart, as they were imagined by his beloved mentor, Le Corbusier;Prof BV Doshi won the highest honour in architecture, the Pritzker Architecture Prize, becoming the first Indian architect to be awarded the prize Photographs Courtesy Prof BV Doshi and Fabien Charuau;The Amdavad ni Gufa is one of Prof Doshi's most outstanding works, built only with hand-tools and unskilled labour.

Hot on the announcement of Prof BV Doshi being the Pritzker Laureate for 2018, his closest friends, past students and contemporaries tell us why he makes a worthy candidate for one of the world’s highest honours in architecture.

Khushnu Panthaki & Sonke Hoof- Architects, Sangath “Very often he asks, ‘What is architecture? Is it separate from our being? Should it affect us emotionally?’ From him, we’ve learnt to share experiences, not profess theories but ask questions, to look at architecture as a living entity, not as an object, to understand the subtle nuances of life and nature in order to create spaces and to be open and grounded and remain curious.”

Rajeev Sethi- Chairman, The Asian Heritage Foundation “In 1968, Doshi sir led Adoor Gopalakrishnan, RK Joshi and myself, then young delegates from an underdeveloped country, to talk at the Aspen Design Conference in the US. He cast a spell on international design luminaries who knew little about housing the masses. He is the master conjurer of space. Thank you BV, for leaving a more tangible India with an inspiration.”

Rolf Fehlbaum & Federica Zanco- Chairman, Vitra & Architectural Historian“ The Pritzker Prize honours a living architect, whose built work demonstrates a combination of talent, vision and commitment, providing a consistent contribution to humanity and the built environment through the art of architecture. As an architect, thinker, city planner and teacher, Doshi easily fulfils these criteria.”

Sonal Sancheti- Architect, Opolis Architects“In 2000, while I was a student at Southern California Institute of Architecture, Doshi sir called and said he was visiting Los Angeles with Khushnu and would stay with us. I was amazed at his humility and the comfort he shared with his students. I admire him for his energy, his willingness to learn and teach and most importantly for being a great human, an amazing guru and a role model to many.”

Rahul Gore- Architect, Opolis Architects “I have fond memories of the CEPT campus. Even today, there is something new to discover on every visit that is the timeless quality of this great architect’s work. His ability to see the good in every student, his willingness to share, his affection for his family, are all virtues of a role model and these with his work, make him first a wonderful human being and then a fantastic architect. This is an honour he truly deserves.”

Sanjay Kanvinde- Architect, Kanvinde Rai & Chowdhury “I have experienced Doshi kaka’s boundless enthusiasm for many years. A recent memory is of showing him the Kanvinde monograph at his house, with him sitting cross legged on the floor, reminiscing about old projects that he collaborated on with my father. The award is a fitting recognition for his contribution to Indian architecture and his tremendous efforts.”

Neelkanth Chhaya- Academician, Cept“With buildings like CEPT, IIM Bangalore or residential projects, his work is fitting for the way people use the buildings. He captures the essence of each building he designs. His sense of proportion, lighting and use of material gives his structures a special character. He deserved this award since a long time and now he has finally won it.”

Sonali Bhagwati- Architect, Spazzio Design“When I completed high school, I had no direction or career path. Architecture was an idea that emanated from a love for the arts. When I entered the CEPT campus, I was floored. In my opinion, it remains his best project. My first question was, ‘Who designed this?’. It was at that very moment that I knew, I wanted to study architecture and study it here under Doshi.”