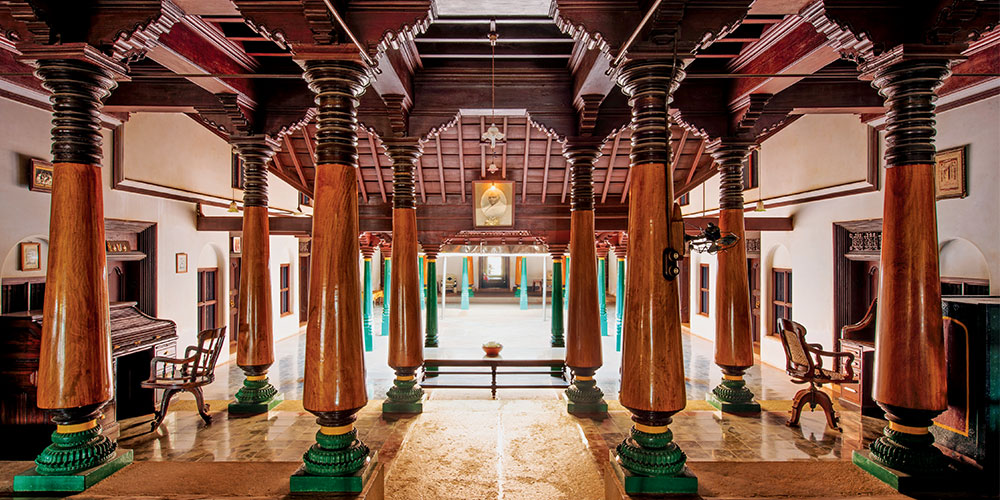 The inner thinnai of one of the houses has wooden columns, with fluted granite bases, tapering circular wooden shafts and ornate floral plaque brackets. They stand on ochre, polished plaster floors that descend towards the spacious courtyard, which is surrounded by 32 granite columns with simple octagonal shafts sheltered by a terracotta tiled roof; Photographs by Bharath Ramamrutham

From the teeming temple centres of Thanjavur, Kumbakonan and Madurai, is Chettinad, homeland of the Chettiars in Tamil Nadu. Unable to make a living from agriculture in the surrounding, unproductive countryside, the Chettiars sought their livelihood in the then far flung British colonies of Burma, Malaya and Singapore as traders and bankers.

In these distant lands, they amassed considerable fortunes, with which they commissioned magnificent houses back in their ancestral towns. Yet only rarely did they occupy these dwellings, using them instead for occasional family gatherings to celebrate births and marriages or commemorate death anniversaries.

Even so, considerable funds were, and still are, spent on maintaining the houses, many of which survive in immaculate condition. Some houses can now be visited by special arrangement, and what delights are to be discovered!

Houses in the towns of Chettinad are often built with grand, neoclassical facades that create the illusion of streets that seem to be lined with European palaces. On entering a house, visitors are overwhelmed with the abundance of sumptuous materials: gleaming tiled floors, elegantly carved teak columns, imported crystal chandeliers, wrought iron balconies.

Yet the interior is traditional in layout, with a street entrance roofed with a wooden vault that leads to a doorway, framed by intricate carved woodwork, incorporating an image of Lakshmi, the goddess of wealth. This gives access to a hall surrounded by colonnades, sometimes of double heighted roofs with an ornately painted ceiling, where visitors are received.

Beyond are two or more alfresco courtyards reserved for the family. This progression from public to more private zones within the house is along an east-west axis, which Chettiars believe is an auspicious orientation, guaranteeing peace and prosperity for the family.