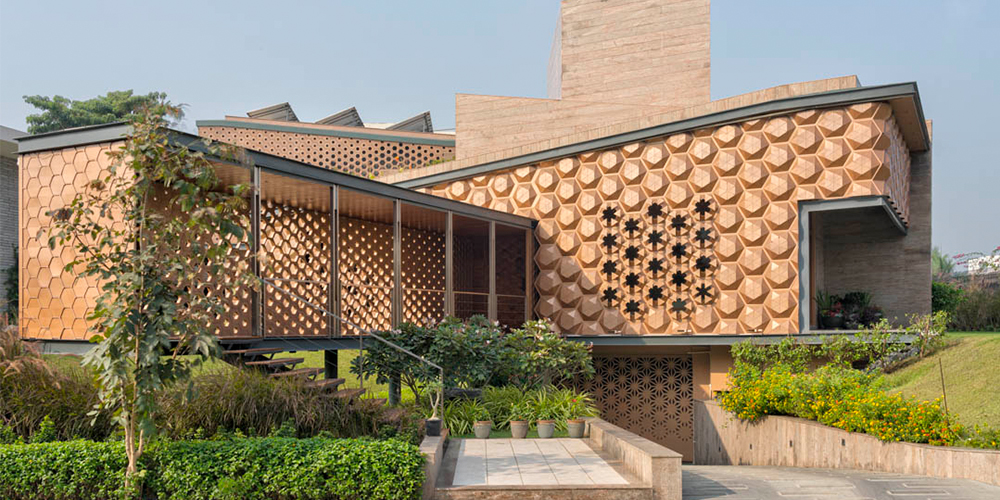 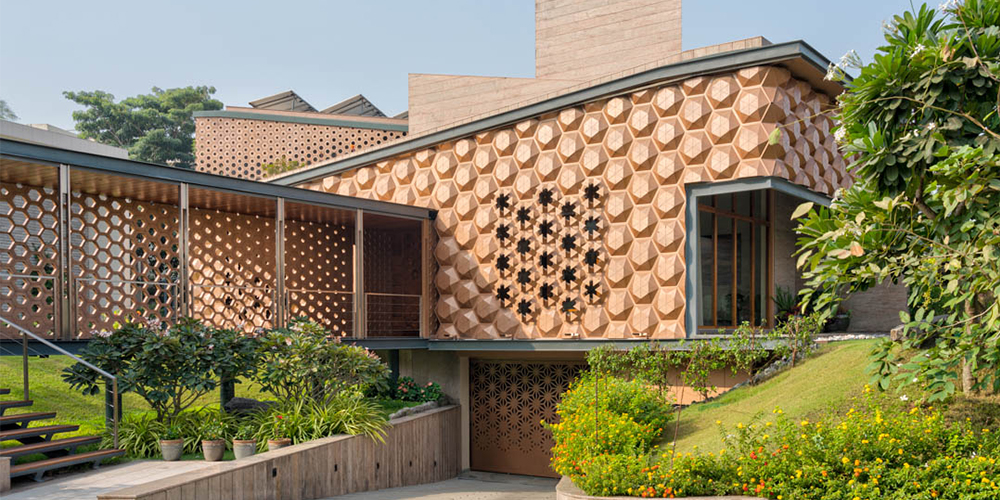 A ramp leads to the garage. Pedestrian entry is accessed via a bridge, seen on the left; Photographs by Fabien Charuau 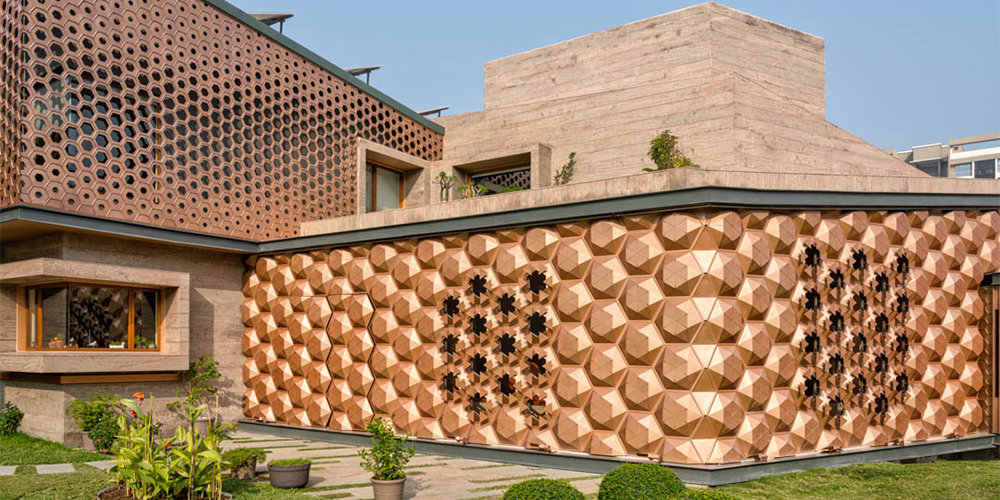 In its fabrication, the facade presents a dichotomy—between a facetted versus planner facade, dynamic versus static, and metal versus stone; Photographs by Fabien Charuau 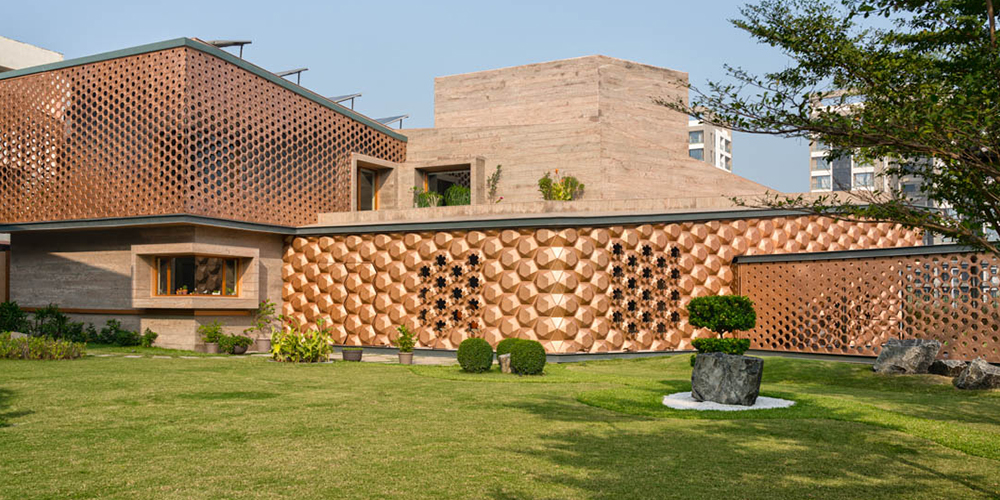 Every section of the Hive House looks out to manicured greens; Photographs by Fabien Charuau 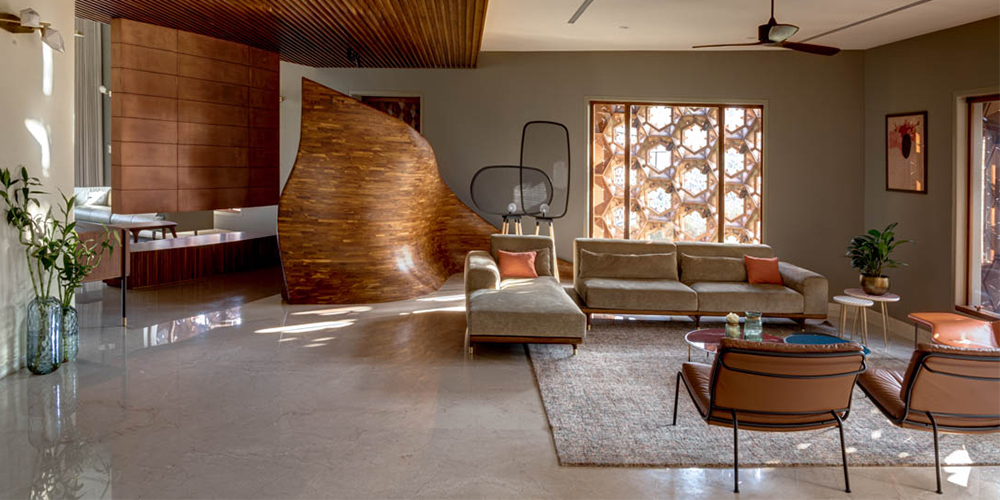 The family lounge features the bespoke Flow partition by Pocho Living on the left. Also seen are a suspended copper TV unit, sofa from Porada, chaise longue from Zanotta, chairs and centre tables from Living Divani, and an artwork by Kuryaat; Photographs by Fabien Charuau 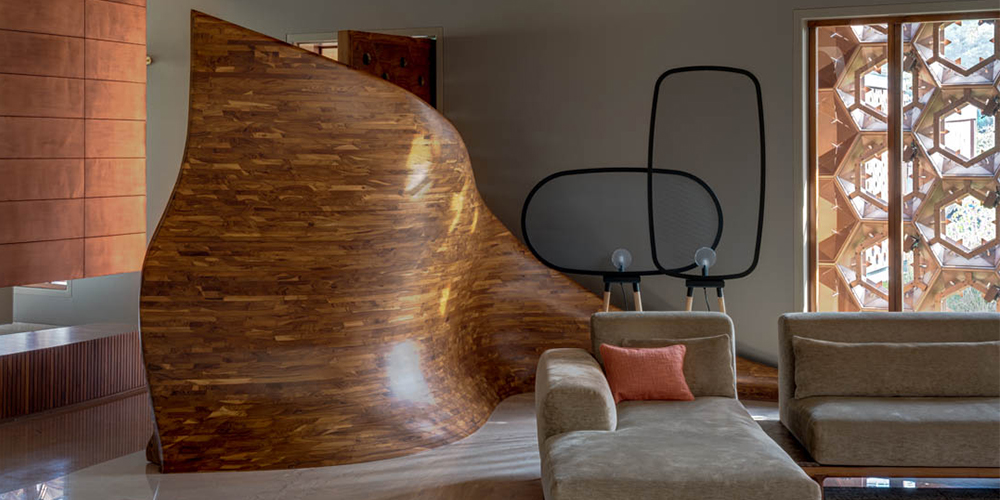 Close-up of the Flow partition conceptualised by OpenIdeas Architects and fabricated by Pocho Living; Photographs by Fabien Charuau 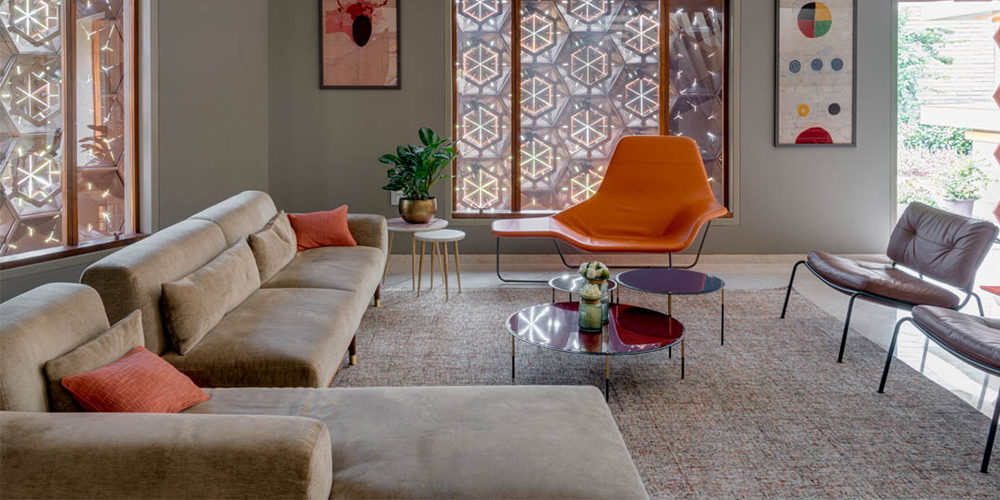 Another view of the lounge showcases how well the Porada sofa pairs with the Zanotta chaise longue, chairs and centre tables from Living Divani, and Kuryaat's artwork; Photographs by Fabien Charuau 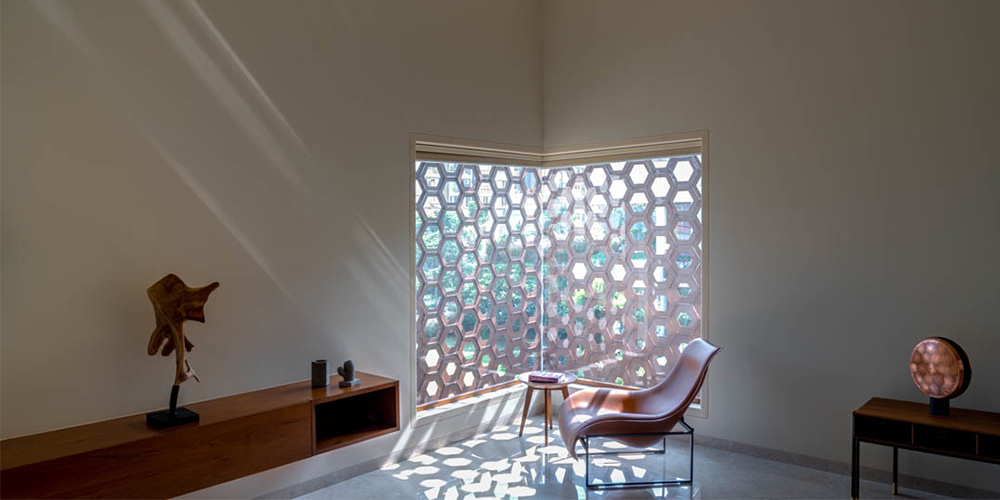 A B&B Italia seater basks in the sunlight that streams through the hexagonal patterned facade; Photographs by Fabien Charuau 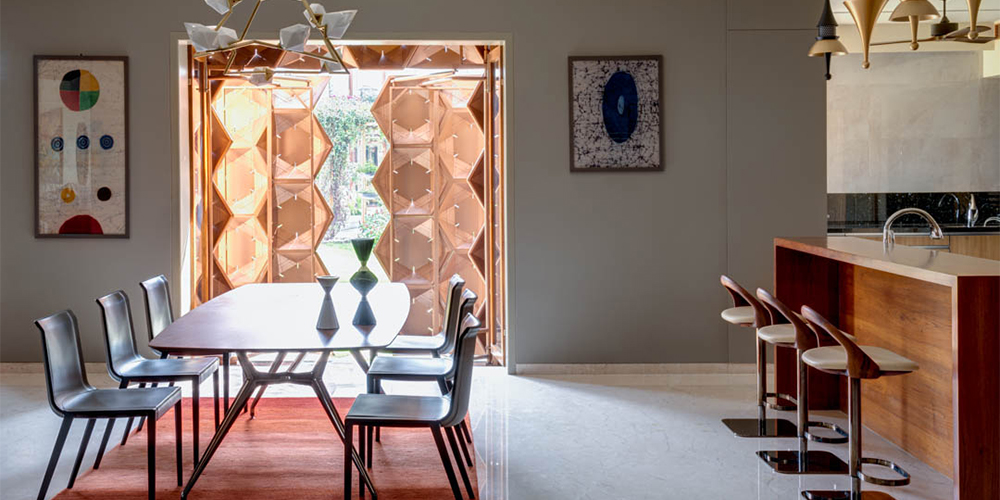 The stairway is a sculptural element in the Hive House; Photographs by Fabien Charuau

“The story of ‘Hive’ began with an investigation in exploring engineering as the backbone of the home’s design,” begins Monarch Champaneri. Located in Surat, this massive abode is conceived and designed as an intelligent and adaptable space by Monarch along with Nilesh Gajera and Niralee Champaneri of OpenIdeas Architects.

The diamond city houses this 7,000 sq ft residence for the Mistry family. “Being well-informed about architecture and given the homeowner’s core competency in mechanical engineering, he was very clear about what he wanted for his ‘home’—a smart structure rendered in metal and a ‘mono-space’ living area,” explains Gajera.

He adds, “Along with those primary thoughts, the client communicated an incredible 90-point brief to the architects, with inputs connected to diverse points—right from the structure, landscape, planning, materials, sustainability, insulation, HVAC and plumbing to the entire year’s sun path study.”

With architecture and light becoming the heroes of the project, the team rendered a technological theme throughout the abode with bespoke and iconic furniture pieces. A predominant presence of metal is seen with complex form, fast construction and an in-depth understanding of temperature, humidity, solar radiation, cloud cover and wind pattern.

The architecture is expressed as an angular V-shaped structure oriented towards green pockets surrounding the house. A series of bridges and valleys with a sunken court, stepped garden, a linear arrival corridor and a walkable green roof with varying slopes are all witnessed as you enter the premises. We love how the roof serves as a thermal insulator, lowering the overall interior temperature while doubling up as a space for social gatherings.

The interiors are as stunning as the exemplary solar sensor-based facade (an intersection of art and engineering). “It was really exciting to design and fabricate this kinetic facade—it’s never been done before in India and we enjoyed working on this feature the most,” says Niralee Champaneri. The facade’s geometry takes inspiration from a honeycomb’s hexagonal patterns, which gave the project the moniker ‘Hive House’.

The facade features a rarely seen, opening mechanism and allows ample room for natural light and thermal comfort levels. The science of sciography is best evidenced through the use of this facade as patterns are cast throughout the day, changing with the diurnal rhythm of the sun.

The ground level is designed with openness and fluidity. This comes with a thoughtful, fluid segregation of public, private and semi-private zones through modulations in the outer envelope along with bespoke sculptural entrance vestibules. A striking sculptural staircase leads us to the upper level that accommodates two bedrooms.

Abundant verdure surrounds the Hive House throughout the year. Small gardens are attached to each chamber to ensure freshness regardless of the season, while a fusion of metal with SS powder coating for the facade as well as the use of wood and stone in the interiors lend a sense of warmth to the home.

“We attempt to present the architecture of a project for what it is—an intelligent and innovative response to local constraints, where new technological innovation along with design excellence plays a leading role,” adds Monarch.

“The inspiration for the envelope and several other elements in the house were found in small, everyday things. While the facade’s mechanism was inspired by doors of airport shuttles, the structure of the stairs was taken from the structural formation of the hexagonal diagrid popularly seen in IKEA’s furniture pieces. Similarly, the movement of radio antennae inform the window opening mechanisms, and the ‘kadki door’ typical of forts [a door within a door] was replicated in the entrance,” explains Monarch.

Another aspect of Hive House that we love is its green features. The team at OpenIdeas says, “Since the homeowner supplied us with a year’s worth of solar study of the site, we used it to our advantage and strategised the architecture and layout. This included energy model simulations to better understand temperature variations and radiation during the year.“

One of the key inclusions is the use of solar sensors in the facade. These feed temperature readings into a microcontroller-based radio frequency board designed by WNeuron Network Design and then modulates the facade’s operation depending on the intensity of daylight. In fact, this operation can also be customised to open early at daybreak and close entirely by nightfall with the help of an app or remote control. What’s not to love!?