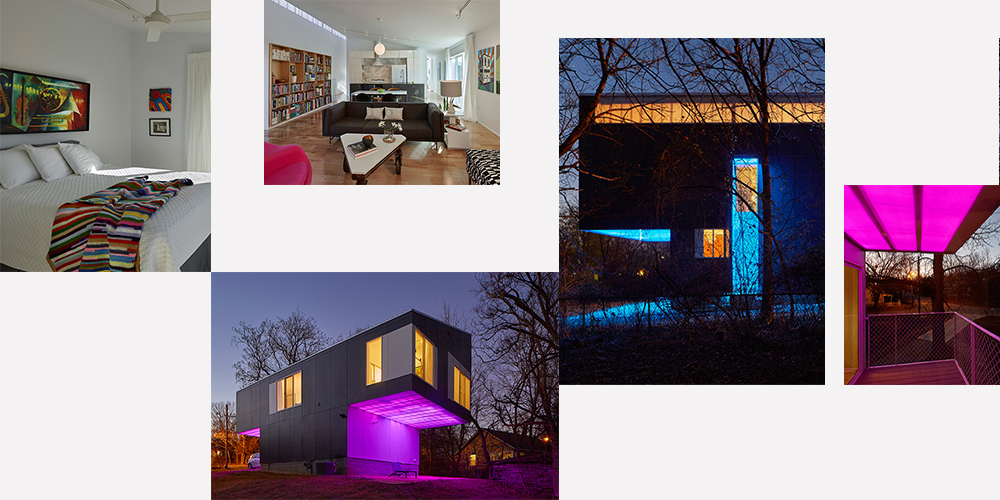 (L-R) A view of the bedroom ; A limited palette of whites and light woods are carried throughout the interior ; Multicoloured LEDs that are controlled by a smartphone are installed in the exteriors of the home ; A view of the exterior of the house ; The Mood Ring Home by Silo AR+D
If you were a child of the ’90s, coloured sunglasses, jelly sandals and of course, mood rings were the coolest covetables. What seemed to be an extremely popular fad in the late ’90s seems to be paving its way back into our homes again. Imagine a house, changing colours according to the temperament of the home… Bringing childhood nostalgia back to physical form, The Mood Ring Home, helmed by American firm Silo AR+D has included multicoloured LEDs that are controlled by a smartphone on the exterior of the home.
Nestled within the sloping mountainous terrain and lush forests of Arkansas, the home gives unique views of the natural landscape to each living space.So how does the humble abode transform into a stunning spectacle of colour and light at dusk? The design is born out of a mix of site limitations and opportunities, economic constraints, and programmatic requirements. “During the day, because of the site orientation and subtle material palette, the architecture has a demure character despite its distinct massing. At night, illuminated soffits construct volumes out of projecting coloured light from concealed energy-efficient LED fixtures. Colours are derived from the temperament of the house and directly by the owners’ desire,” says Mark Manack, Principal architect of Silo AR+D.

While the exteriors of the house display drama, the interiors are relatively sombre in nature. “Interiors are articulated and finished to enhance the expansive and overlapping relationship between spaces. A limited palette of whites and light woods are carried throughout the interior. Details throughout leave corners open to imply interlocking spatial relationships,” says Mark. The house was built for a modest $80 per square metres, keeping a sustainable, low-cost concept — a policy that echoes the architect’s belief, “We gained other economies by using off-the-shelf readily available materials and fixtures. The minimal footprint reduced foundation costs, which are at a premium in Arkansas because of the unstable soils. We also collocated utilities in the layout to minimise costs for mechanical, electrical, and plumbing distribution costs,” he says. A house like this is sure to rouse neighbour’s curiosity, “Following the completion of the Mood Ring House, nearby homeowners have begun to equip their porch lamps on with multi-coloured LED bulbs, transforming the neighbourhood into a Rainbow Light District!” says the architect.