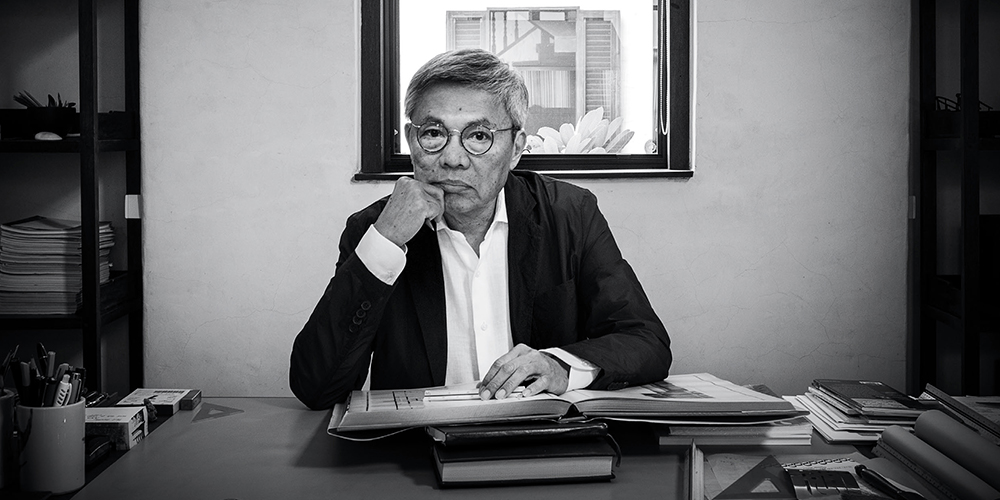 Establishing his namesake practice in 1970, Ong-ard Satrabhandhu has been a flag-bearer of classical and traditional architecture in today’s modern era; Photograph by Pirak Anurakyawachon

“There’s a common misconception that rules restrict us from being creative. On the contrary, I think working within set norms urges us to create more,” says prolific architect, urbanist and conservationist Ong-ard Satrabhandhu. Establishing his namesake practice in 1970, the Thai architect has been a flag-bearer of classical and traditional architecture in today’s modern era. He attained a career milestone when he brought recognition to the conventional Lanna architectural typology that’s sensitive to the history of Thailand as well as its environment.

On the subject of the preservation of Lanna architecture, he reveals, “My approach is not academic, I try to preserve the parts that are unique by infusing them in my work. For instance, the idea of free-standing stucco and wood columns within structures helps create a distinctive space. I believe emphasis should be given to grouping of buildings in site planning scenarios.”

Since his graduation in architecture from Cornell University and master’s in urban studies from Yale University in the 1960s, he has perceived traditional architecture as a relaxed version of classical design. Identifying the many similarities between Western, Chinese and Indian classical architecture, he integrates the principles of axiality and bilateral symmetry into his designs. He says, “Architects should familiarise with the grammar and rules of classical architecture, both of the east and the west. The idea of a base, middle and top—a human body, is a universal idea behind classical design everywhere.”

The architect’s belief in the concept of ‘designing as little as possible’ has an indelible effect on his approach to projects. “If someone’s really good, they don’t possibly need to design at all to create a righteous building. Good structures should be quiet and composed so as to make people feel comfortable in them,” he quips. “When there are set precedents, why try to reinvent what has been done before and done well. Why not just take their solutions and then reapply them to solve our problems,” adds the designer.

An exemplary project that focuses on proportion and movement is the acclaimed Rachamankha Hotel in Thailand’s Chiang Mai city, which was initially simply a nondescript site. “I was mesmerised by the layout of ancient Chinese dwellings. There’s a hierarchy of spaces—from semi private to private ones—gradually unveiling themselves with a sense of mystery. We’ve used several axes to connect different kinds of open spaces,” Satrabhandhu explains.

Another well received project is the Courtyard House in Bangkok, the eminent designer shares, “The idea was to create a retreat. We’ve lifted the entire house so that all the services, and parking are beneath it. At the entrance, we wanted everyone to feel that they’re entering another world. We’ve used many historical building elements sourced from across the world, including the early 17th century Wang Compound in Shanxi Province.” Resolving this complex programme, Satrabhandhu and his team have planned courtyards to link separate quarters for the family.

With this market, Satrabhandhu continues his passion for urban design. He’s imbued the space with a serene essence of transitional spaces. “We’ve aligned our buildings with the main street, emphasising on quality public spaces. A glass enclosed galleria is intended for a leisurely walk, coffee hangout or browsing at the bookstore. It also blocks the existing parking garage,” says the urbanist.

In 2015, the icon authored A Tradition of Serenity: The Tropical Houses, which stresses on the importance of open spaces that are enclosed by the structures. The renowned architect says, “I abide by Lucien Steil’s quote: ‘The building should look as though it had always been there’. This is the experience we wish to achieve.” It’s no wonder that the creative won the prestigious Driehaus Architecture Prize last year. But no one was more surprised than him. “I’ve always admired the work of previous winners; I never dreamt I’d be a recipient because there’s much to be improved on the work that I do. I am deeply honoured to be one of the laureates.”

It’s no wonder that the creative won the prestigious Driehaus Architecture Prize last year. But no one was more surprised than him. “I’ve always admired the work of previous winners; I never dreamt I’d be a recipient because there’s much to be improved on the work that I do. I am deeply honoured to be one of the laureates.

To those who are likely to follow in his footsteps, the Thai creative says: “Worry less about abstract theories and be more concerned with the experience of emotions. Good buildings communicate. I believe that we should have more architecture schools like The University of Notre Dame, where basic knowledge of traditional and classical architecture is imparted rather than abstract theories. It’s imperative for the next generation of architects to acknowledge our rich history. There’s just so much to learn from the past.”

Inspired? Head here to read about design dignitaries, their work and ideas on ELLE DECOR India and do check out the June – July issue here!