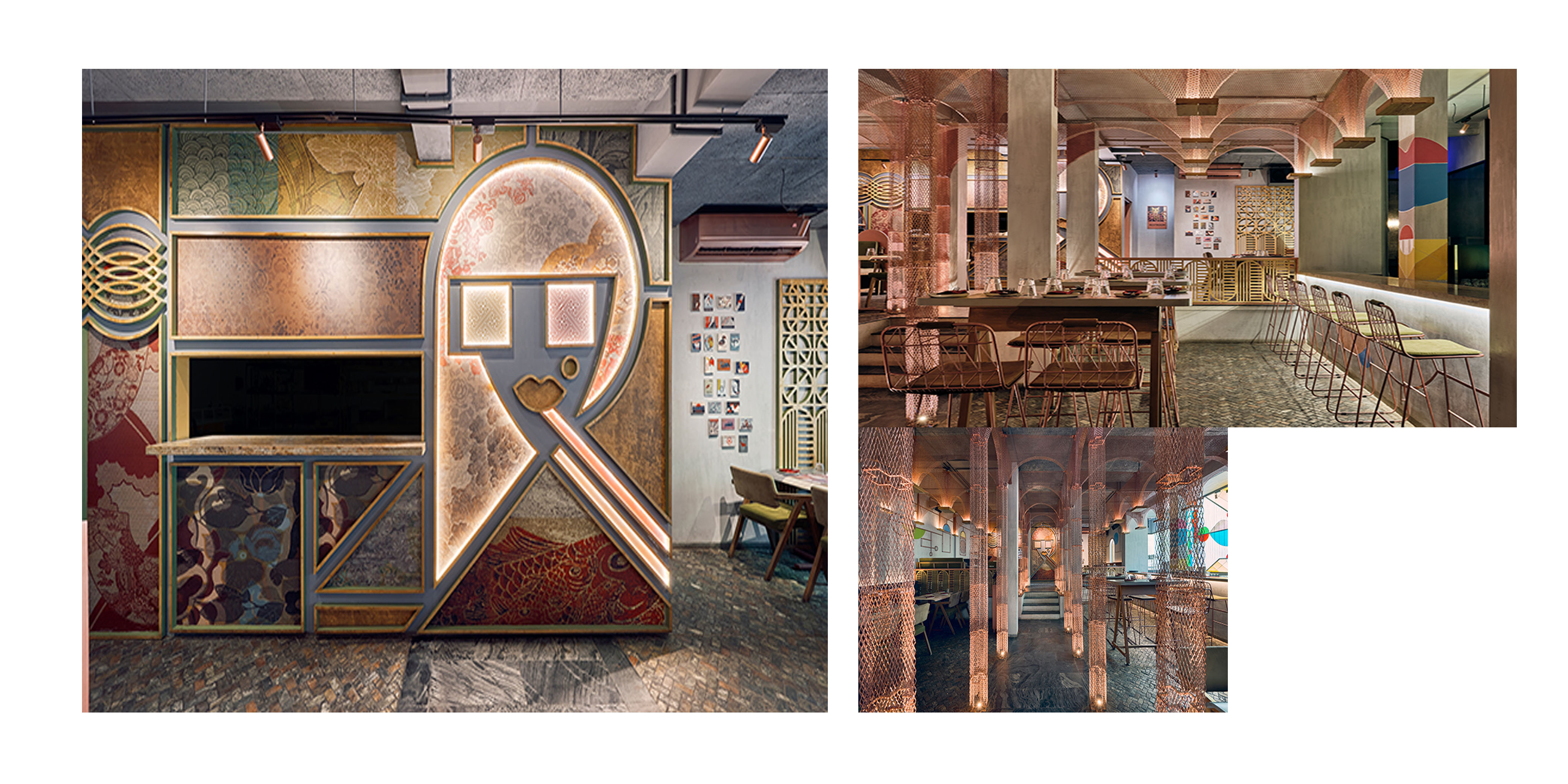 Misu is not your stereotypical Asian restaurant with red interiors, dragon imagery and bamboo planters; it gives the appearance of an unfinished chapel. Roman church elements create a counterintuitive feel in this Asian eatery. It’s central isle brings to mind the alter at a church supported by columns and arches. Sunlight streams in through the stained glass windows, illuminating hand painted wall murals. The central passage allows a clear demarcation for customers as well as servers, while adding a sense of spatial clarity to the roughly 1,000 sq. ft. area. “Spatial planning was something we needed to work out. We toyed a lot with the step up to the Mezzanine level and continuing the design there. In the end, we fashioned the area with an installation of a girl’s face to give it prominence, much like a pedestal,” says Farah Ahmed, cofounder of FADD Studio. Aesthetically, the layout gives importance to the face, which is now becoming the brand’s identity. The new restaurant’s provocative arched interior draws in people. Its raw, almost unfinished look gives a sense of sitting in an old church that has been renovated into a restaurant. The colour palette stays true to the other, older Misu establishment. “Since this was the second Misu we were designing, we wanted it to have a bit of familiarity for brand recall. So we brought back deep colours such as blue, green, mustard and crimson, while incorporating the element of copper,” explains Ahmed. Rich colours such as mustard, olive, cranberry and deep blue enhanced the material palette of grey cement wall finishes and copper mesh arches, with a hint of wood.Misu is a contemporary and edgy interpretation of an Asian restaurant seemingly nestled within a church, with classical western elements set against refined minimal Japanese shapes in a mesmerising confluence. Indirect lighting softly illuminates the mesh arches and hand painted walls to create an intimate atmosphere at night. Arches lead up to a deconstructed, almost cubist portrait of a girl’s face, which acts as the restaurant’s central point, whereas the abstract stained glass at the back of the bar stands out in the day lending a zesty, hip ambience.