Maximising on minimalism: A Bengaluru home by Creative Geometry frames up a monochrome story indoors with lakeside views galore 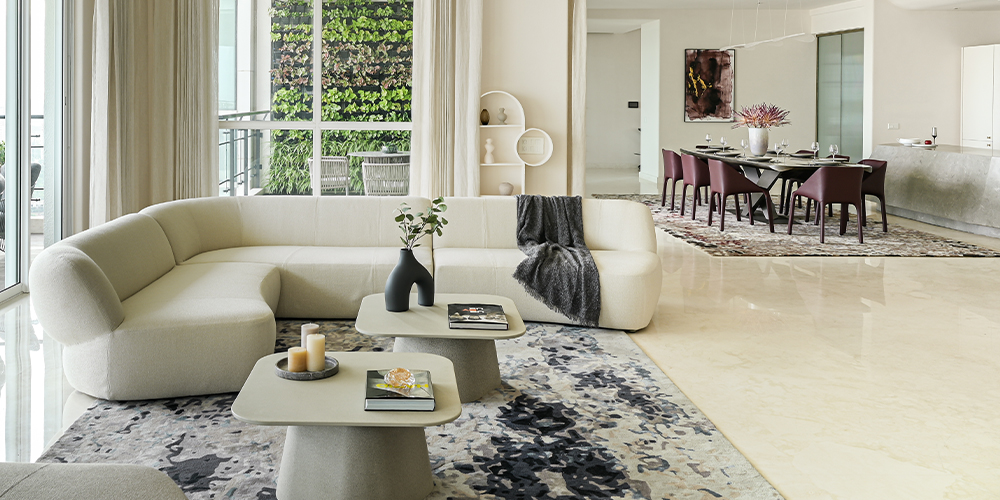 A part of the living room is bathed in neutral hues with a white coloured sofa from Molteni&C Dada, Italy and a centre table from Tribu, Italy. Rug from Creative Geometry and by Carpet Kingdom; Photographs by Nayan Soni 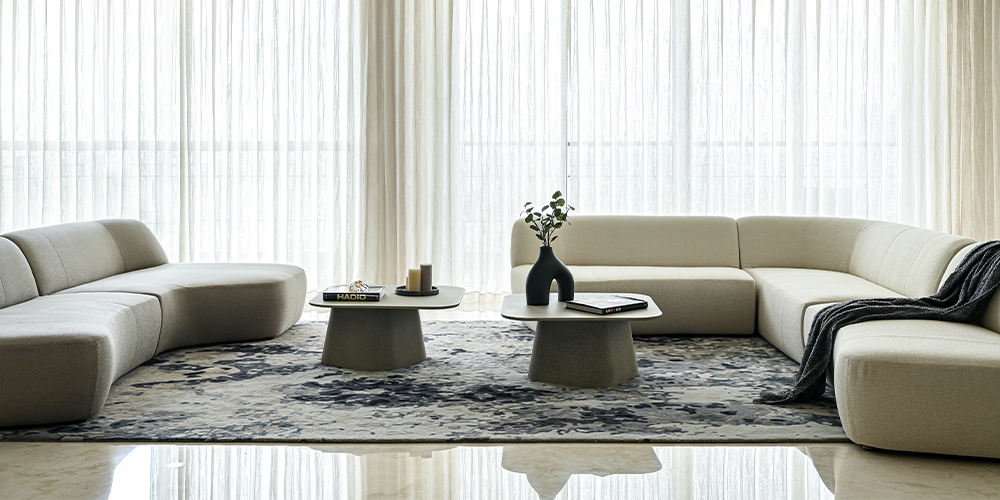 The sofas from Molteni&C Dada, Italy, and the grey coffee tables from Tribu, Italy, create a neutral section of the living area. Rugs by Carpet Kingdom and Creative Geometry, curtains by Petals, Bengaluru; Photographs by Nayan Soni 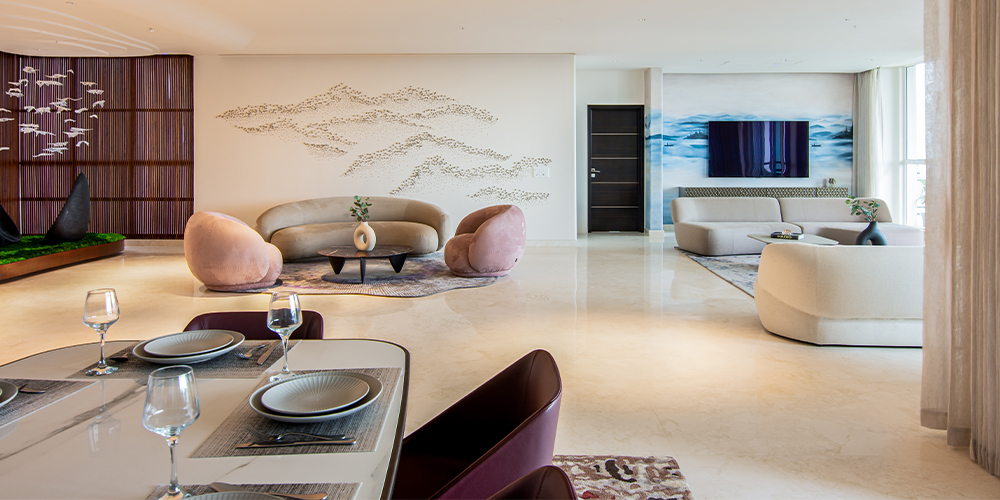 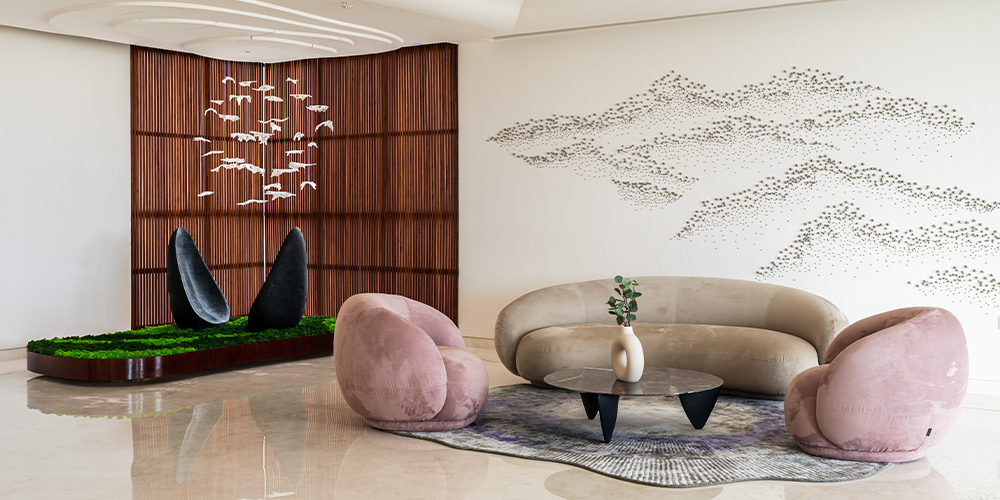 The installation by Creative Geometry of metal beads serves as the focal point of the formal living room; Photographs by Nayan Soni 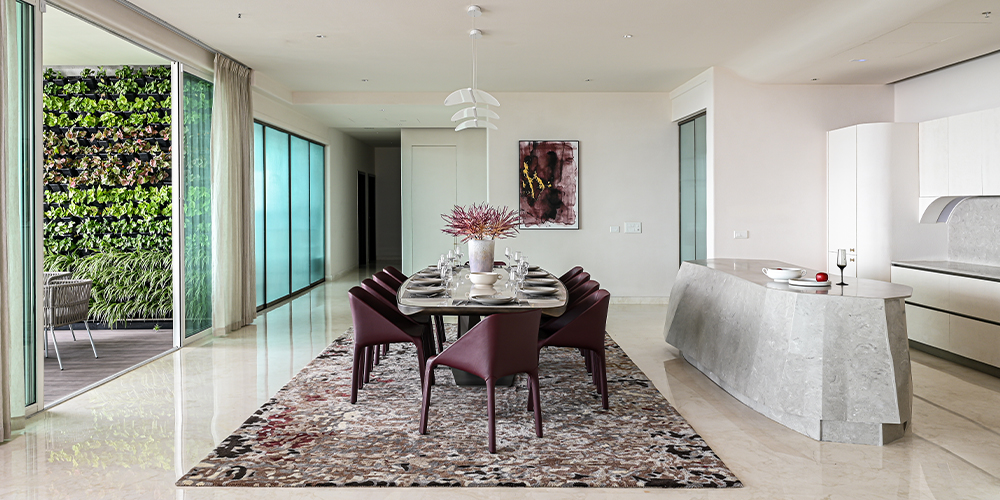 The dining table is by Cattelan Italia and the chairs are by Poliform with the pendant light by L'azure. The dry kitchen counter/Bar counter was conceived as an organic slab of stone With OMA, Bengaluru designed the artwork hanging on the wall; Photographs by Nayan Soni 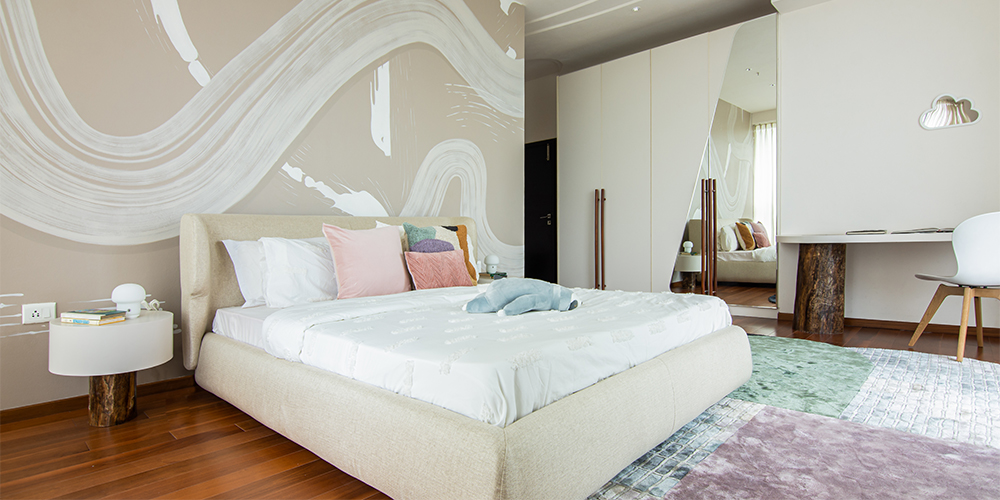 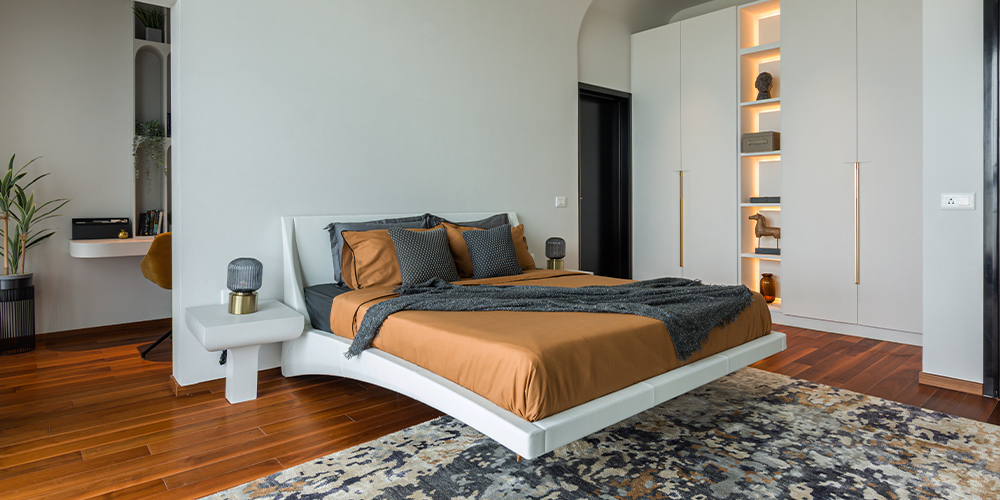 The bed in the junior suite is from Cattelan Italia with a wardrobe from Creative Geometry finished in textured paint with a PU coat; Photographs by Nayan Soni 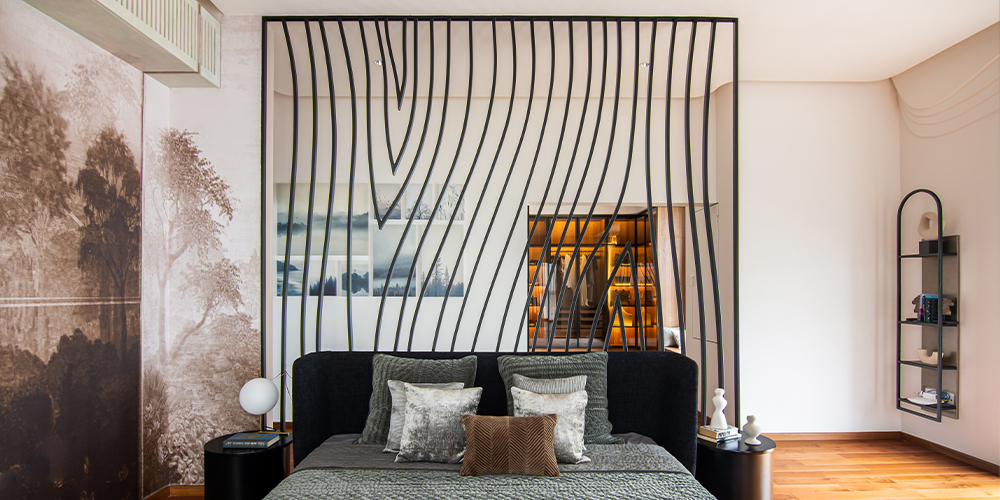 The partition very subtly divides the master bedroom from the open walk-in wardrobe while the 10ft tall metal partition is custom-made; Photographs by Nayan Soni 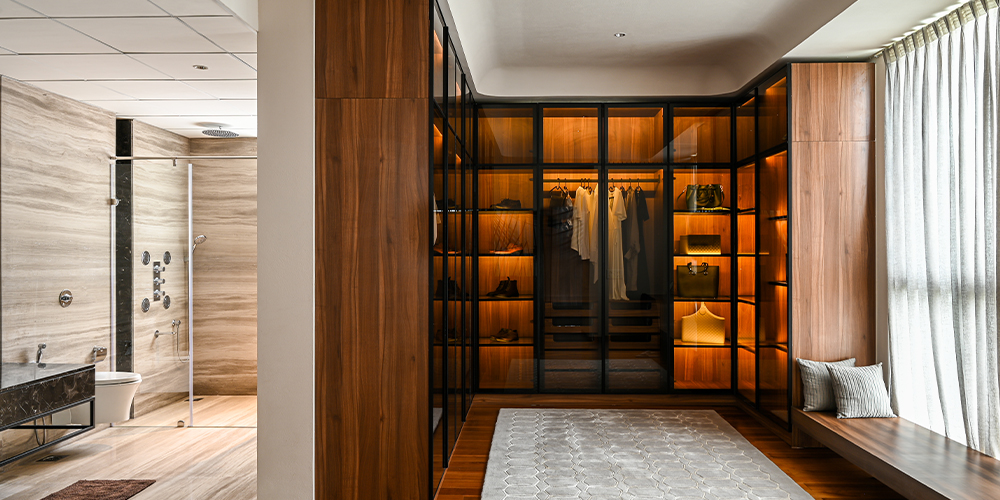 The walk-in closet is finished in wood and is designed by Creative Geometry; Photographs by Nayan Soni

Spaces that we live in are often more than just a checklist of furniture and interiors. What we also fondly call our ‘home’ — these spaces are proverbially a story in making, a riveting recital of memories, some time spent in joyful solitude and of course, decking up the home to its aesthetic best.

One such abode dubbed Harbour Club in North Bengaluru, nested on the 33rd floor of a high-rise wraps in resounding calmness away from the city bustle, in sync with the serenity of the Nagavara lake outside—dextrously designed by Creative Geometry and Principal Designer Akhilesh Baldota.

Elements that cannot be outlived carved the precis of the residence with hints of sophistication and unconventionality. “The design intent was to keep it minimal yet have unique features. The design had to emphasise on the layout while capitalising on the views outside.”

Indoors that sip on the views outdoors…

The home spells synonymous to a museum of breathtaking visuals. The sprawling living room is awash in a sober colour palette of whites, creamy beige and soft pinks, creating a rather soothing mood that heightens with the encompassing, large glass window that frames the cityscape outside.

What commands attention throughout the den is its romance with the concept of curves. Akhilesh reveals, “to align with the concept of organic forms and no straight lines, we rounded off edges of the walls with the technique of punning.” Thus, from the point of entry to its various rooms, the visuals of the ‘bend’ on walls, ceilings and even furniture piques intrigue.

The living room trickles seamlessly into the dining room, set up with a gorgeous, deeper tonal palette seen on the chairs and table, juxtaposed with a minimal-chic dry kitchen and bar counter decked in an organic slab of stone.

But beyond the simple textures and monochrome moodboard, a common element swathes the whole apartment. “The one material that unifies the entire space is the beige stucco texture paint, custom made to compliment the mood and tone of the space.”

Ambling into the primary bedroom, a clean layout captures the eyes, and the fact that it looks squarely outside to the vistas of the lake. An open walk-in wardrobe extends invitation separated astutely with a custom partition.

The home is a statement in itself. Capitalising on its grand spaces that spill a convincing  poetry of elegant minimalism, what emerges as another winning element is art. Akhilesh muses, “Art was at the centre of the design in various forms such as the seed shaped stone sculptures at the foyer, sand dune inspired metal art in the formal living, nature inspired wall painting in the informal living and more.”

In fact, the exquisite light installation in the home was designed and custom crafted by Creative Geometry, drawing inspiration from the wings of a bird.

A delicate collision of art and technology finds life in the kitchen where utility is imperative. When Akhilesh and his team realised the lack of lighting here, a solution had to be devised but not without a touch of aesthetic. Hence, was created a light box in the ceiling spanning the whole kitchen doubling it up as a spectacular skylight culinary zone!