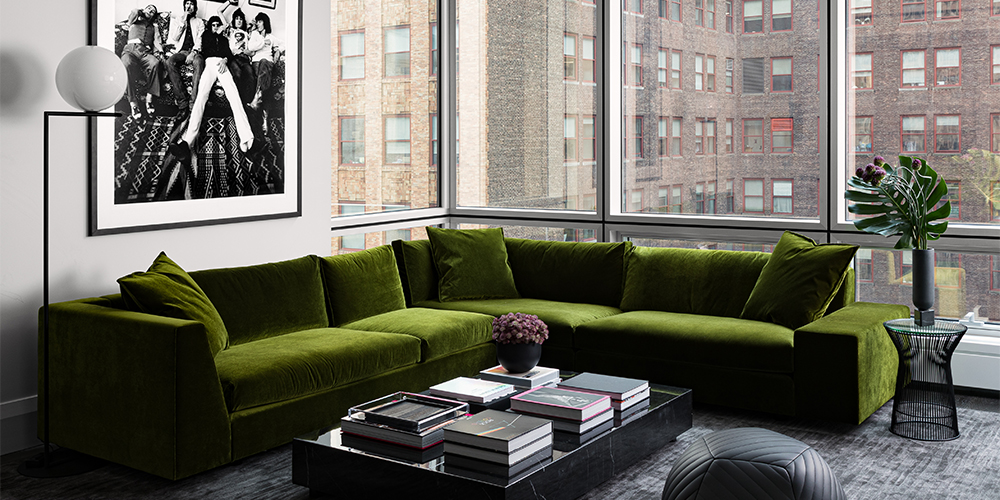 The living area stars a L-sectional green sofa amongst the black and white narrative; Photographs by Sean Litchfield

Lately, it’s not just women who are taking centre stage but also their tastes. This 1,600 sq ft bachelorette pad for Paige Rudzin by Justin Charette of Charette Design in the NoMad area of New York flaunts clean lines and shades of green like no other.

When Rudzin reached out to Charette via Instagram, the latter was more than willing to take up the project as it was his exact forte. Rudzin expressed her desire to avoid typical soft colours often employed in bachelorette pads vehemently, falling square into Charette’s love of modern interiors and neutral palettes.

The inspiration for the palette arose from the 33-floored newly constructed building housing the apartment. From the exterior to the lobby, the thoughtful play on slick black materials made Charette want to establish a flow from the outside in, peppered with some features reflecting Rudzin’s personality and love of music.

Upon entering the home, a foyer with generous closet space, a powder room, and a laundry room comes into view. The living area flows into a large open kitchen, while its main living area is an open plan with a dining area. Off the living room lies a bedroom with a large bathroom and multiple walk-in closets.

The green sofa adds texture and elegant pop of colour to the living room. “The biggest challenge was giving the space a touch of rock-and-roll without being too overt about it. The client wanted clean lines and didn’t want the space to feel too eclectic,” says Charette, who loved designing the space.

A tiger stripe rug that is similar in colour to the flooring added another layer of texture while still maintaining the stardom of the green sofa. A large 6 ft by 6 ft Rolling Stones print above the sofa blends the narrative with black and white rock-and-roll photographs in the kitchen.

The touches of green represent an ode to nature in an otherwise grey city view. Velvet, marble, leather, and black metals form the material palette of the pad. The materials scream rock-and-roll, but Charette made them look elevated and modern.

The leather ball in the living room and leather straps on the bed pillows knit the aesthetic together. In the bedroom, tan tones add warmth while playing off the predominantly green and black palette. A Saatva adjustable bed frame and mattress in the bedroom make an appearance courtesy of Rudzin’s family owning the company.

Staining the bathroom cabinet dark green added space to the palette party subtly. The secret to bringing all of it together was keeping it simple and sleek. “Less is more—I avoided clutter and opted for larger items with high impact over smaller pieces,” says Charette.

While the aesthetic looks like a straightforward touch of rock-and-roll with a base of New York City slick, all good things take time. Charette reveals, “The selection process took about two months, and the project completed seven months after that with the sofa taking the longest time to cross the ocean.”

If this bachelorette pad amazes your design sensibilities, make sure you check out The Loft by Rasneet Anand that blends the spaciousness of New York lofts with the nonchalance of Lokhandwala!