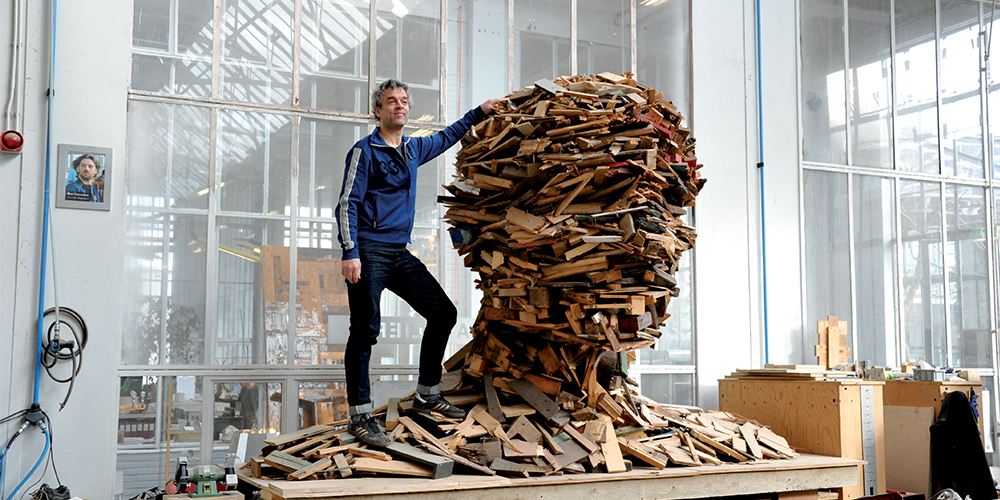 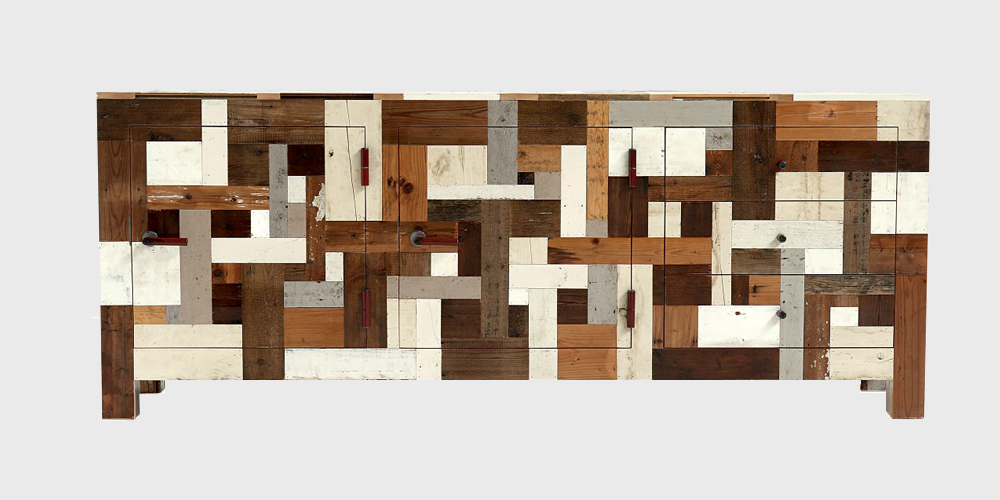 Waste Cabinet in Scrapwood : Made with traditional woodwork techniques, featuring three doors and a high gloss finish, this is a bespoke variant of the iconic Scrapwood Cupboard designed in 1989. Each piece is one of a kind as it uses scrapwood available at the time of manufacturing 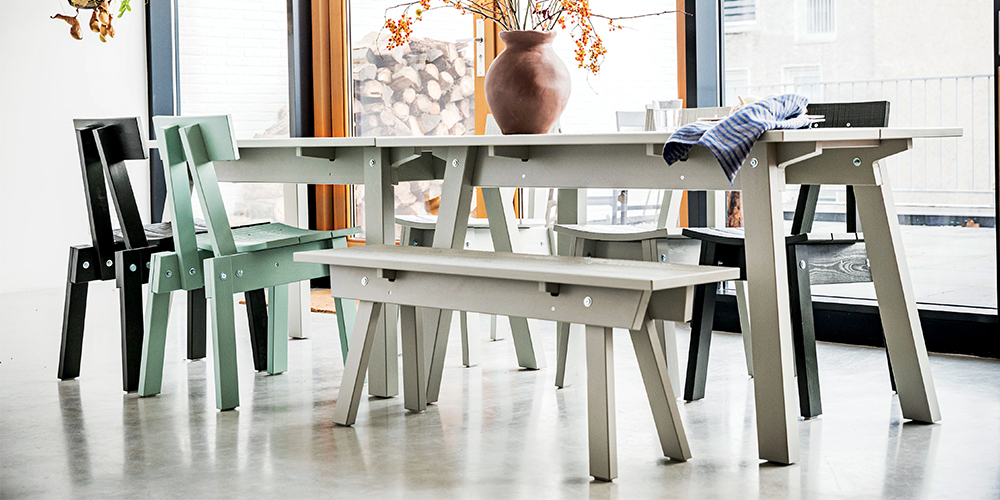 Part of the IKEA collaboration, the Industriell table, benches and chairs are crafted from clear lacquered pine 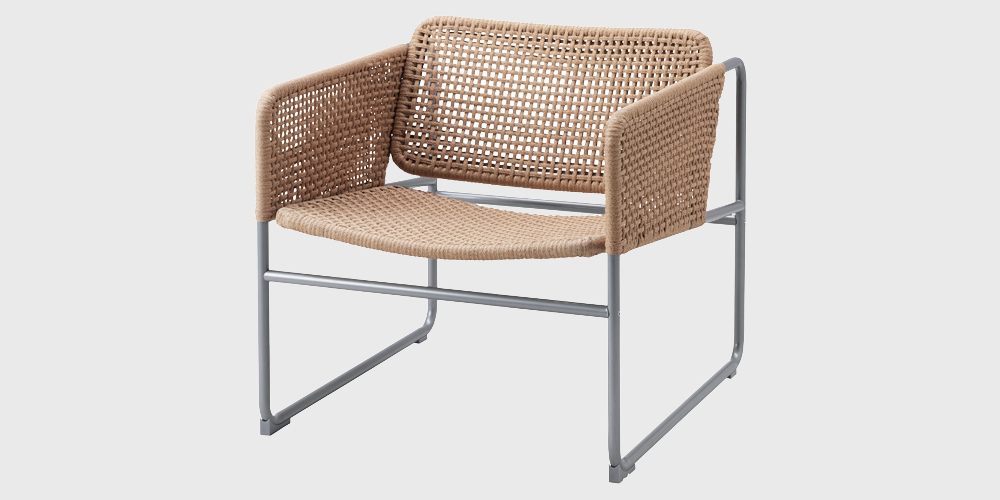 Part of a collaboration with IKEA, the Industriell Armchair is crafted from clear lacquered paper and powder coated steel

I became a designer but originally wanted to be an architect because, all my life, I’ve loved being outdoors, creating something or the other. I was a very busy guy even at a young age, constructing huts and so on,” muses the Eindhoven based designer. Renowned for his sustainable approach and use of leftover material, Piet Hein Eek is a patron of an increasingly coveted trait—efficiency. “A lot of people stereotype me as a designer who recycles and is eco friendly, which is true but it’s not a left wing progressive inclination like some make it seem. For me, it’s just logical to work with the resources that are readily available. By doing that, you don’t utilise too much precious energy or exploit our world and what it provides,” he shares, going on to illustrate his design philosophy that has been refined over 30 years. “My starting point is ‘what’s the question?’ and then I try to create a rational process or design relating to what’s available here in the workshop in terms of machines, labour and material. Unlike most contemporary designers, I don’t think of something new and then follow it up by ‘how do I execute this?’, avoiding too many challenges in that regard.”

In a world where if something isn’t radical or cutting edge, it doesn’t impress, Hein Eek believes that designers often forget that their creations have to be based on what’s already accessible to some extent. For him, the real test lies in designing a product that is instantly recognisable as one of his. “You must see it just once and go ‘oh that’s his creation.’ So, it has to be strong visually and then it must be priced adequately, according to the character of the product. That’s not to say it must always be cheap,” he says, prior to a statement that perfectly confounds some of his critics—”If you don’t throw it away, you don’t have to recycle. I always try to make furniture that lasts forever.” When asked what inspires him, the creative says, “I’m not much influenced by other designers, although I feel acquainted to Jean Prouvé because I relate to his way of working. In general, I like music and art, and I really like processes. Perhaps the most inspiring are certain books that focus more on the way of thinking than the resulting design itself. One of the best books I have ever read was Ons Feilbare Denken by Daniel Kahneman. The psychologist who won the Nobel Prize for Economics in 2002, which, even at the time, was quite surprising. He has revolutionised the way people think and conduct research by simply questioning all results. In the book, he also said that most people staunchly believe that they were right but, in truth, their results are only a reflection of what they desire. I love his way of thinking and questioning almost everything—for me that’s inspiring.”

Before graduating from the Design Academy in Eindhoven in 1990, Hein Eek had already decided that he wanted to start his own atelier to make furniture. The designs he created as part of his coursework were those he deemed suitable for producing in small quantities soon after he got his degree. The most iconic of these was the 1989 Scrapwood Cabinet that set the tone for his remarkable career, birthing the philosophy that he would either create from leftover material, or ensure that there was no material left over. However, it was another belief that he established around the same time that has been the core of his oeuvre. “You have to create an environment where you are happy, stimulated and feel comfortable with the people around you. The place itself will lead to inspiration and opportunities,” he says, adding that one’s daily reality must supersede future goals.

Having bought a collection of buildings just outside Eindhoven’s city centre in 2010, the designer created an environment that embodies his unique beliefs. An idea that stemmed from wanting to create a haven for buying and selling pieces, which existing dealers were wary of experimenting with, has now blossomed into a design experience in itself. The sprawling concept store, restaurant, art gallery, showroom, five studios, and more, invite visitors to experience the sounds, smells and sights of the creative process; and one learns that there is indeed a method to the madness.As we begin conversing about what’s next for him, the design maestro simply states that he hopes his workshop continues to inspire people and make them happy. “I think the biggest goal is bringing this space to the highest level in terms of experience and communicating what I believe in. I like it when people are surprised but more so when it’s because they’re thinking about things they don’t normally think about. I would like to create an environment here where people can imagine how they would like to live themselves. That would be nice.”