; Silent lights lead the way in this home by Sharan Architecture + Design 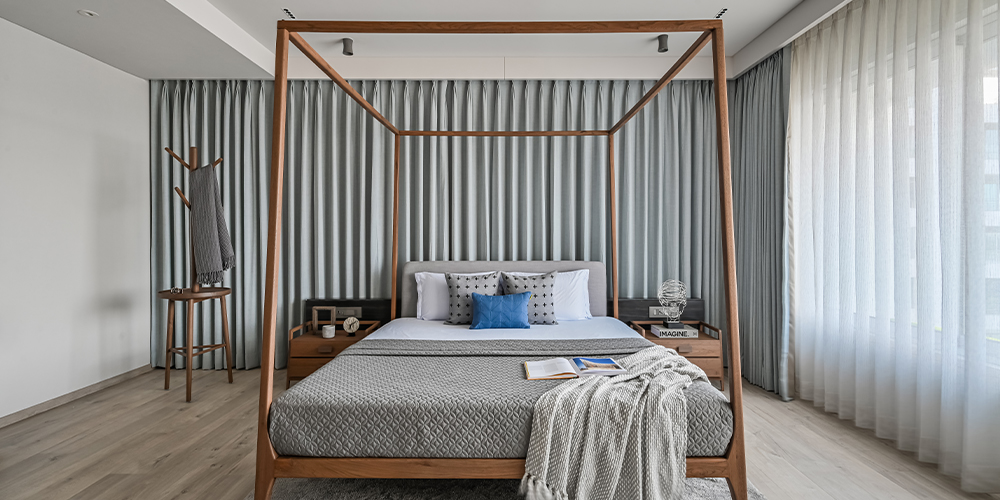 The primary bedroom’s highlight is the poster bed, set against the backdrop of cool and bright shades; Photographs by Nilkanth Bharucha 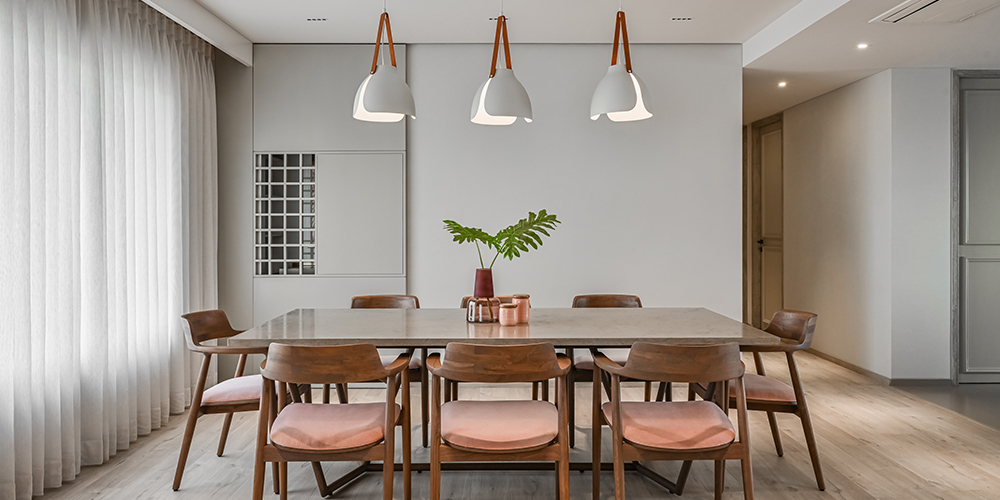 The clients’ lifestyle clearly hinted towards a straightforward and simple ambience, with strong emphasis on relieving the space of any heavy furniture that highlighted itself; Photographs by Nilkanth Bharucha 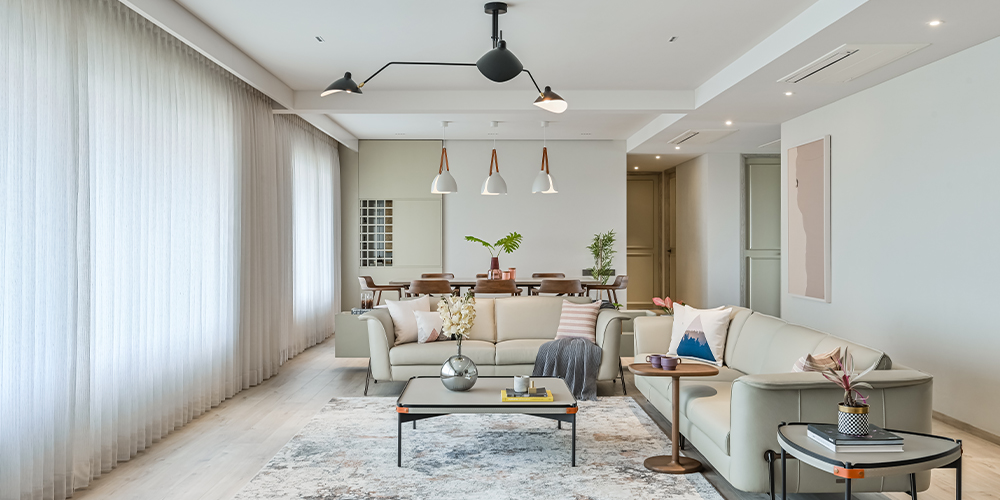 The custom-made furniture provides a calm demeanour to the living space, while the glare-free lighting lifts it soothingly; Photographs by Nilkanth Bharucha 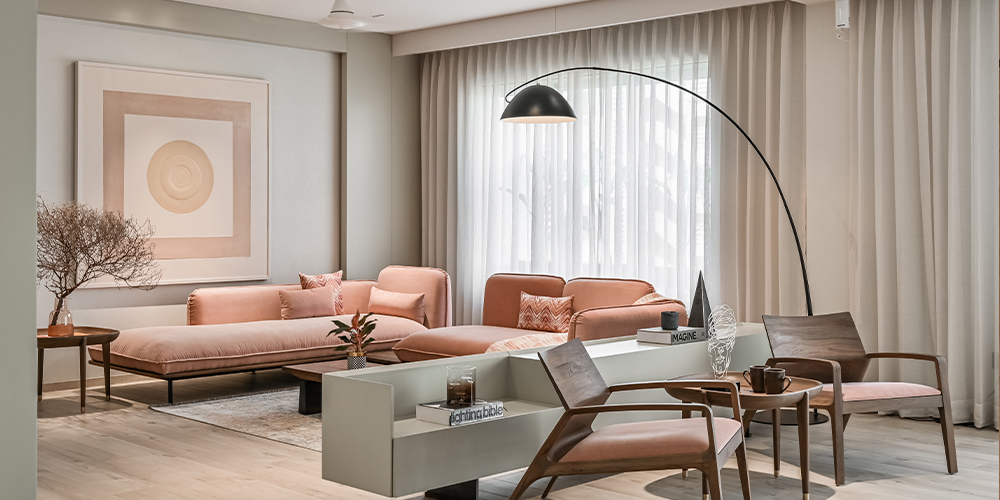 The governing theme of this space is of pastel-shaded minimalist elegance, with a hint of texture; Photographs by Nilkanth Bharucha 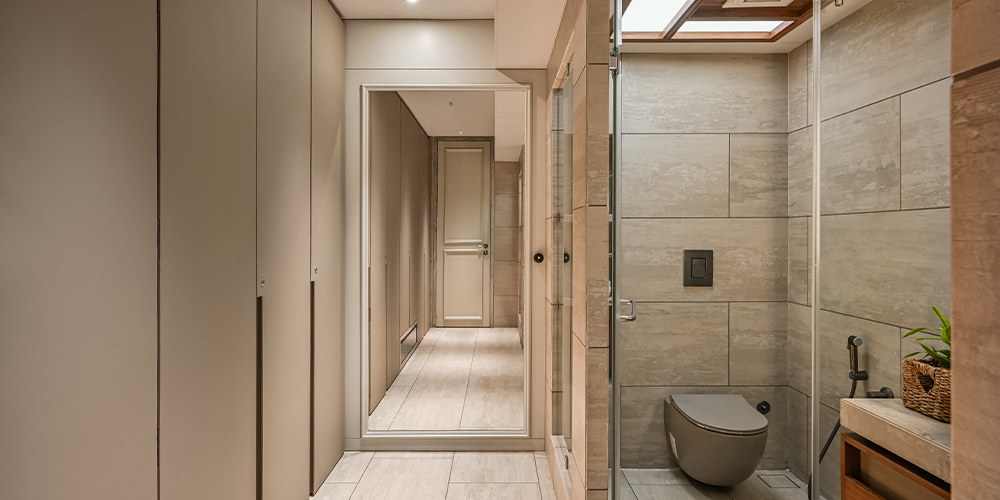 Materials used in this entire space have received proper treatment before usage, to ensure their durability against wear and tear over time; Photographs by Nilkanth Bharucha 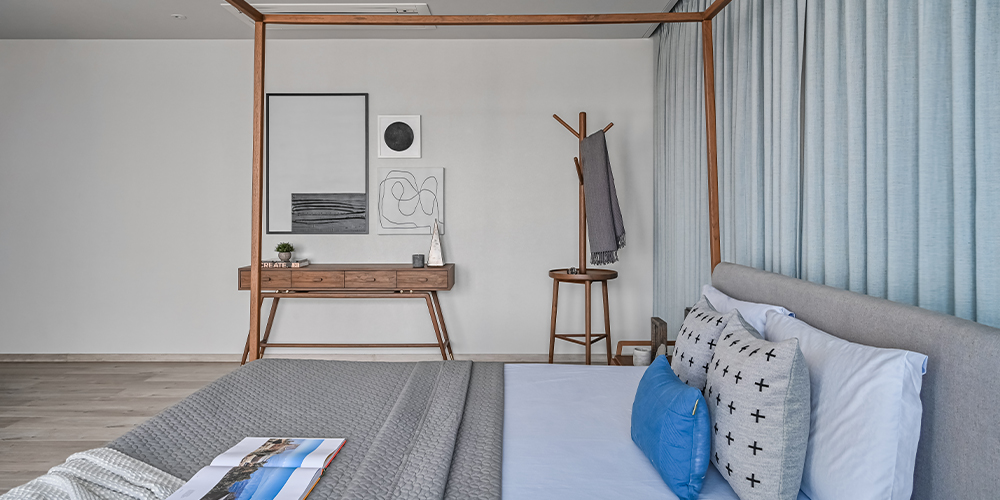 The primary bedroom is designed in such a way that make sure that the space is not just aesthetically pleasing but functionally fulfilling too; Photographs by Nilkanth Bharucha 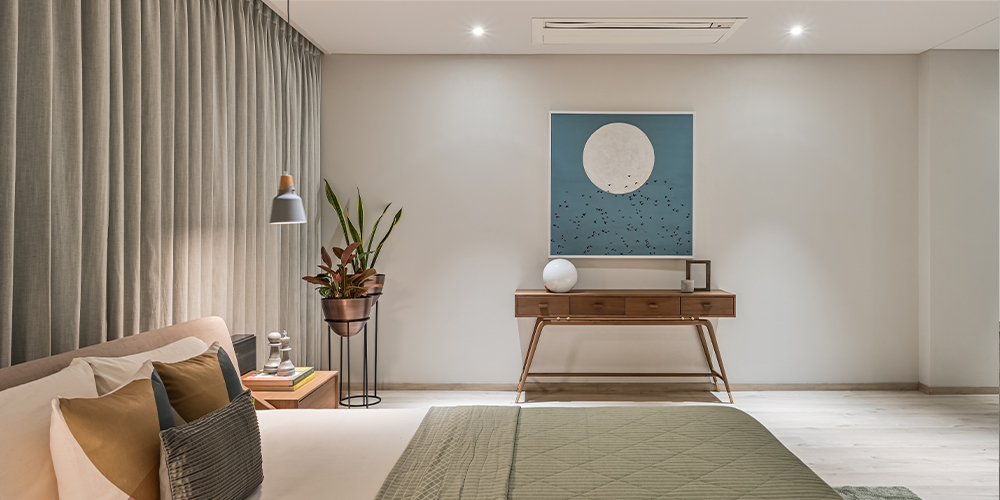 Shades of pink, grey, green and blue are interplayed in a visually pleasing way in the son’s bedroom; Photographs by Nilkanth Bharucha 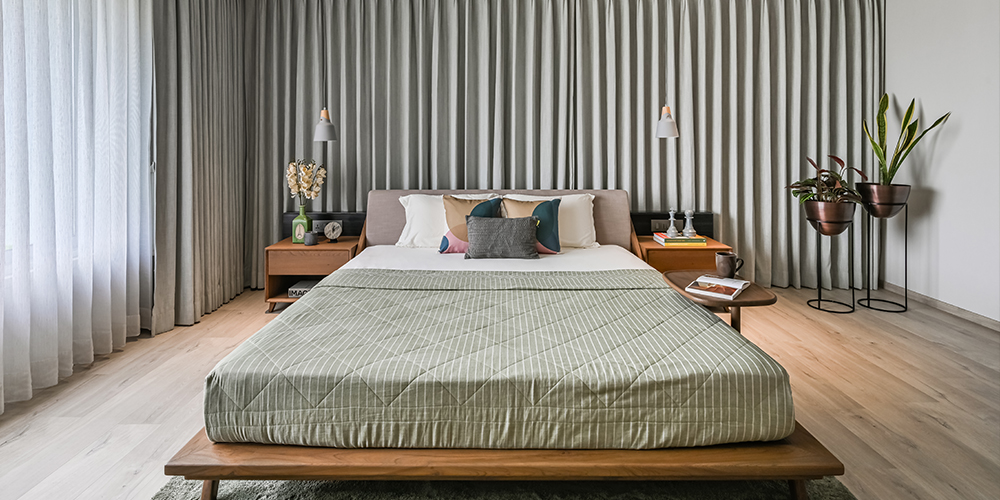 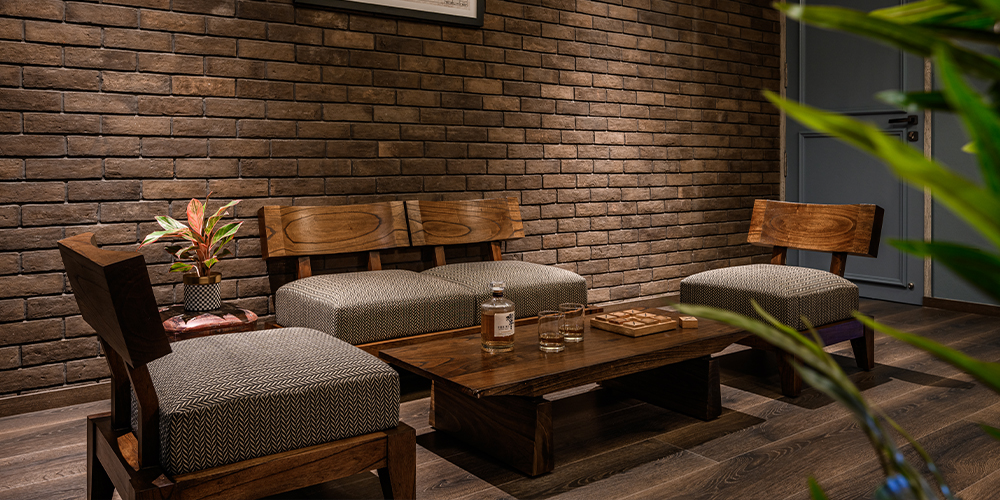 A brilliant source of indirect light floods the entire party room with the intended vibe; Photographs by Nilkanth Bharucha 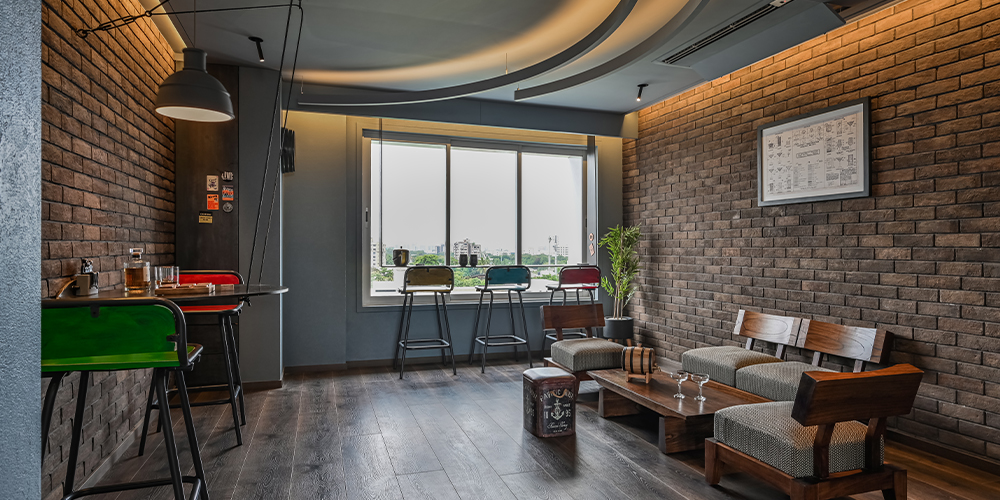 The house is beautifully balanced by the cheerful jubilation experienced in the party room, which is adorned with brick walls on two sides; Photographs by Nilkanth Bharucha The governing theme of the guest bedroom is a space of pastel-shaded minimalist elegance, with a hint of texture; Photographs by Nilkanth Bharucha It is difficult to make out sometimes when the lights are switched ON, which aptly enhances their silent character in this drama of light and shadow played over a premium birch floor; Photographs by Nilkanth Bharucha 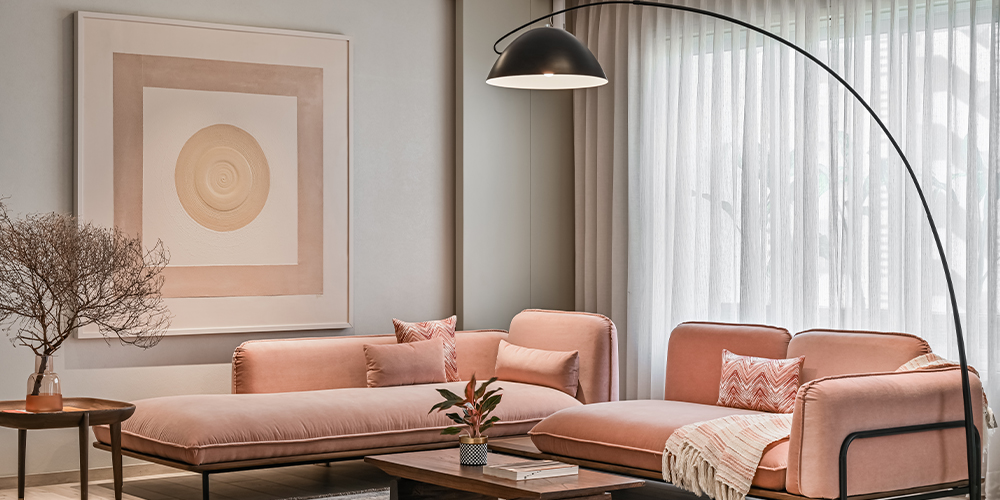 A cosy foyer opens up into a vast living area which is divided into formal and informal spaces by a low-height console; Photographs by Nilkanth Bharucha

A home by the Tapi, offering panoramic views of the timidly flowing river while being nestled amidst the many bungalow colonies in the vicinity is such a dream, isn’t it? It’s like striking the perfect balance between living a tranquil life in a natural landscape and indulging in the comforts of the built environment!

Principal interior designer Vipul Sukhadia and co-founder Kruti Sukhadia of Sharan Architecture + Design have seamlessly woven subtle colours and nuances in this Surat home. Spanning across a carpet area of 3,800 sq ft, the space was initially obtained as a four BHK open space with minimum walls from the builder’s end. For the designers, the challenge was to keep the space intact its airy essence.

Talking about the brief they received from the client, Vipul shares, “Hailing from a rich textile background, the client had a keen interest to have their home designed in a solid pastel colour palette. Having ample space for a three-membered family, they chose to keep the circulation quite open and minimal, adding as few elements into it as the space demanded.”

Instead of following the trend of creating vertical partitions between public and private areas in the living space, they let the furniture do the task—rendering minimum obstructions to any user. The subtle separation between the formal and informal living areas created that distinguishing element.

A delicate balance between pastel and neutral tones of colours has been orchestrated wherein shades of pink, grey, green and blue are interplayed in different parts of the home. A basic material palette defines the house constituting wood, smooth flooring and the furniture that had an unusual simplicity attached to it.

Right on the threshold, a majestic main door which opens into a breather-cum-foyer area greets the visitors. The cosy foyer then opens up into a vast living area, divided spatially into private and public sections by a low-height console.

The pièce de résistance in the living space is the breathtaking view from the expansive window that enthralls inhabitants and the visitors alike. Next up is the dining area and kitchen to the right, followed by the powder room and the multipurpose area.

An important but often overlooked aspect of design—lighting has been the prime focus of this home. The lighting scheme was so meticulously planned that they accomplished their task without attracting too much attention.

“You will find evidence of this quiet symphony where the area is well lit, however it is difficult to judge whether the lights are in fact ON or not. This silence is beautifully balanced by the cheerful jubilation experienced in the party room, which is adorned with brick walls on two sides and a brilliant source of indirect light that floods the entire room with the intended vibe,” further elaborates Kruti.

The biggest benefit of this household space is the amount of window space they enjoy, providing for a generous influx of natural daylight that greatly reduces the use of artificial lighting in this space. A realistic yet extraordinary space, this home explores design elements in their raw forms—sublime and absolute.

If you like this stunning space, make sure you check out Nesavu, an artful home by Gayatri Gunjal, founder and creative director of YellowSub Studio!