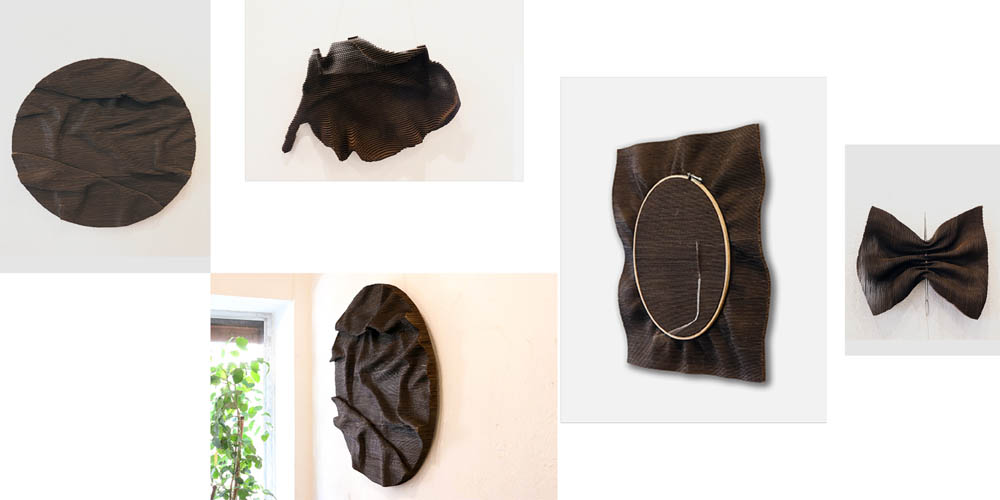 Contemporary artist and EDIDA 2018 Wall Coverings winner, Bandana Jain hits the nostalgia button – evoking memories and tales which has fabricated our contemporary identities.An exposition of artworks – of recreated mats, saris, sheets and cushion covers with unsuspecting corrugated cardboard as the canvas, Fabricated Tales at Mumbai’s Jamaat Gallery is the sensorial surprise that we have been waiting for. Bandana’s artworks are derived from the micro and macro aspects of life and the world at large.

Using cardboard as an expression of contemporary art, she also synthesises cardboard with different materials to create unique expressions of functional art as well. Fabricated Tales: The Series weaves a story that conveys memories from Bandana’s childhood spent in a palatial house in Thakurganj, Bihar, about two decades ago. The works provoke nostalgia – a time when the women of the house did embroidery together to the sound of a battery-operated transistor.

“Embroidery was a custom of sorts,” says Jain. “Young girls who’d completed school were trained to embroider bedsheets and pillow covers with floral designs. As a bride, she would eventually take some of these works to her in-laws’ house while leaving some behind with her family as souvenirs.” The mats, saris, sheets and cushion covers carry a strong message of sustainability and Jain recreated the embroidered items in corrugated paper.

“I believe my artworks usually cater to a much mature viewing audience and somewhere along the way, we’ve lost touch with many parts of our lives,” she says. “I want to give back the pleasant feeling of the time when it was all about human interaction.”

Fabricated Tales: The Series by Bandana Jain will be on display at Jamaat from 16 January to 1st March 2019 Address: Jamaat, National House, Tulloch Road, Colaba, Mumbai.