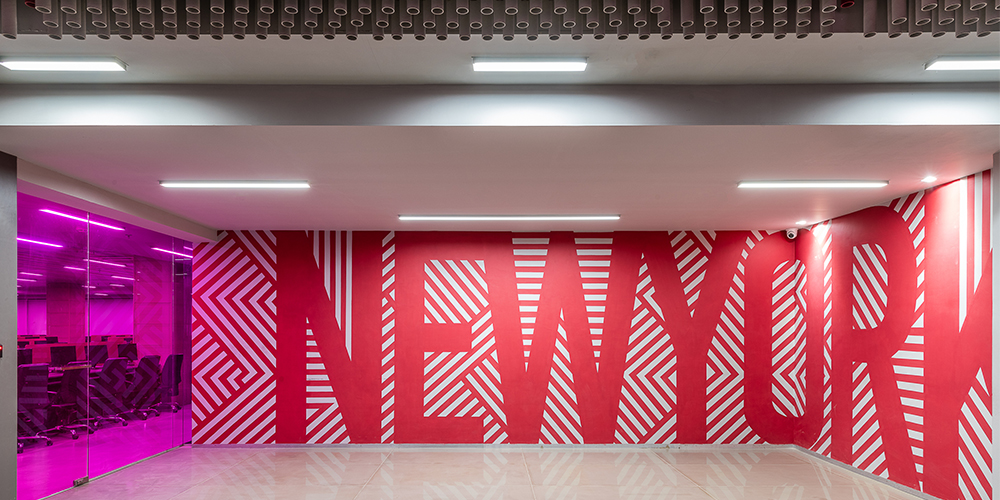 A wall with colourful graphics joins the fuchsia glass and marks the New York workstation in the East Wing; Photographs by PHXINDIA 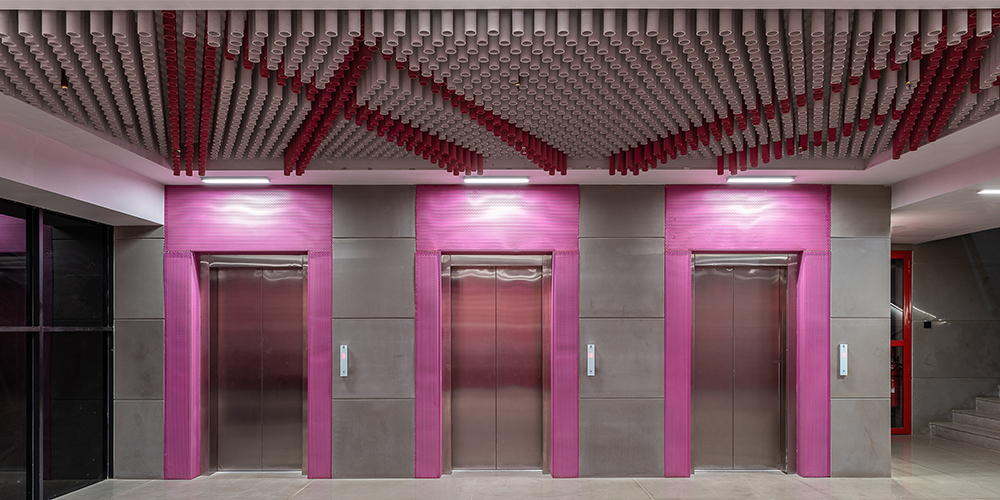 On the ceiling in the lobby, a textural composition of paper pipes features “A” for Arcgate; Photographs by PHXINDIA 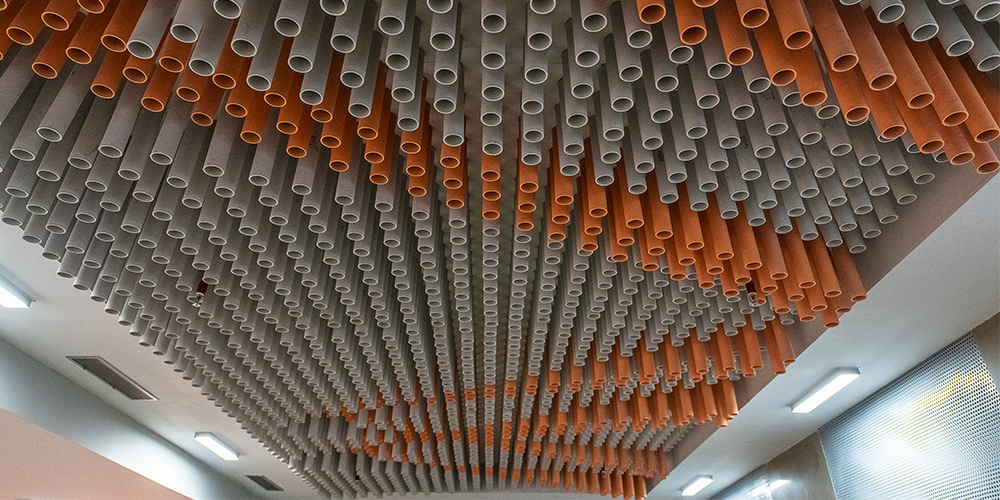 Detail of the paper pipes; Photographs by PHXINDIA 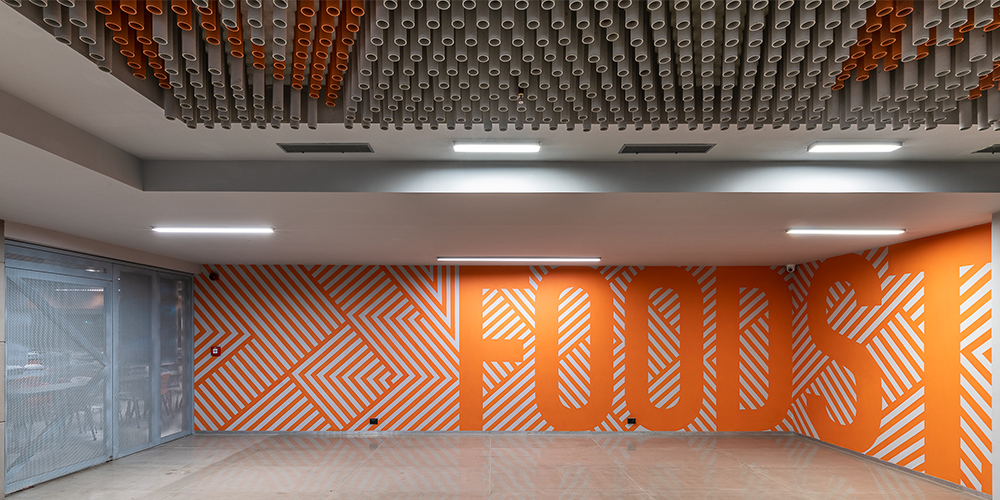 A wall with colourful graphics segregates the cafeteria; Photographs by PHXINDIA 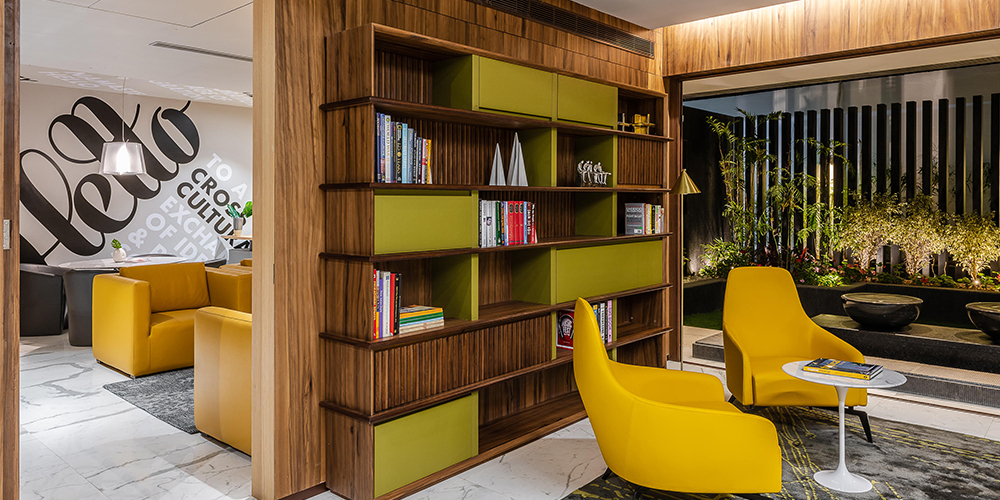 A wood and leather panelled library unit forms the backdrop to the seating area in the director’s cabin; Photographs by PHXINDIA 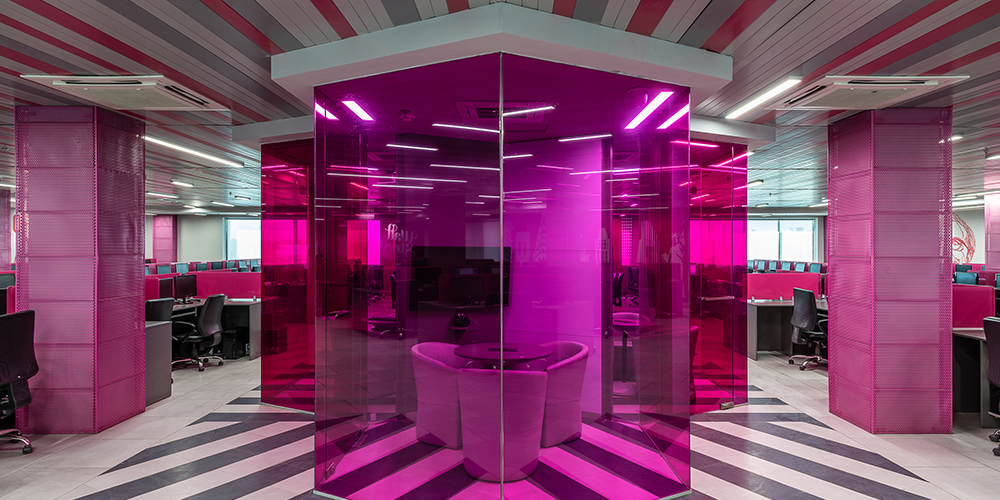 A bold pink hexagonal pod stands out against the striped flooring and ceiling; Photographs by PHXINDIA

Explore, debate, collaborate, create—these are the buzzwords that define the brief given to architects Khushboo and Kunal Khandelwal of Design Inc by Arcgate for their office in Rajasthan. The Campus (as the workspace is called), housing a team of analysts who collaborate with startups from around the world, is infused with vibrant graphics and a millennial vibe. The company’s initial “A” features on an obsidian back painted glass wall near the entrance. Arcgate’s campus comprises a set of three buildings around Central Square, which are named for their orientation—South, West and East wings.

Keeping in mind that the average Arcgatian is 23 years of age, the walls of the 50,000 sq ft East Wing, in particular, are adorned with striking patterns and popping graphics. The imagery features philosophical quotes from famous personalities and landmarks from different global cities, which are home to the startups Arcgate is associated with. The East Wing, for instance, has three halls called Boston, Chicago and New York as well as the Food Street cafeteria. On the ground floor, Himalayas houses the executive area—the director’s cabin, a garden, conference and meeting rooms. With a neutral palette of white and grey, the spirited and upbeat philosophy of the company is translated very differently on this floor making it more understated to be in sync with the nature of the space. However, the conference rooms carry the true essence of the office’s youthful ideology, with vivid and bold lettering on the walls as well as a series of vibrant hexagonal glass meeting rooms that stand out against the stark, striped floor.