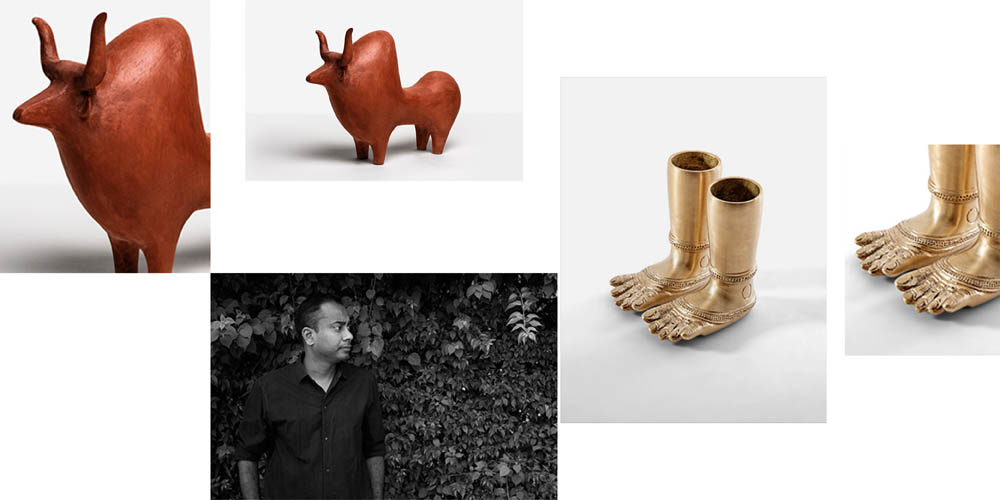 (L-R) his terracotta bull sculpture is adapted from an Iranian Rhyton circa 1000 BCE;Sanjay Garg of Raw Mango;While displaying his prowess, Angad put one foot forward and said if anyone can move my foot then we will give up Sita and Rama will go back from Lanka.

Raw Mango’s Sanjay Garg began his journey in 2008. A statement pause when it comes to beautiful designs, the designer blurs the lines between fashion and actual design to create addresses that beckon you into an unparalleled universe. Inspired by the motifs of India and to commemorate his 10-year journey, Sanjay gives us an exclusive peek into his limited edition of objects titled ‘RM 10 Objects’ that take the conversation of design beyond textile. He gives us an exclusive peek into the designs and their evolution.

Each object is a reflection of the design evolution of the brand. Ask Sanjay Garg what inspires him or how he thinks about textiles, his answer will inevitably be, “one cannot see textiles in a compartmentalised silo. Kala (as he calls it), is a by-product of all forms of artistic creation and is intertwined with history and culture. Only when you look back can you look ahead and work on something for the future.”

The designer, through the use of material, technique and form, provides further insight into its expansive aesthetic vocabulary – both tangible and intangible.

These are a culmination of ideas, a lifetime’s inspirations and what it is that makes the designs stand apart from the crowd. Walking us through the collection which launches today, he says, “These objects are a homage to humanity’s past, our shared histories across the globe and a celebration of the vast cultural repertoire of India and its crafts. Created across the country, each object has a story of its own.” ED: The germination of this idea – designing 10 limited edition objects for 10th year anniversary of Raw Mango.SG: Raw Mango is a design house rooted in Indian culture and global in relevance. Our completion of a decade and realisation of this milestone is commemorated through the launch of a series of 10 limited edition objects, each of which speak to its expansive aesthetic vocabulary through the use the of material, technique and form. ED: What motivated you to look beyond the layers of being a fashion designer to experimenting with this vertical medium of design?SG: We have continued to explore solutions in design – be it through our textile, cultural events or retail environments. It wasn’t so much about experimenting as it was about studying another medium of expression that focuses on the decade long impact of Raw Mango.

Our interest in the human condition, socio-economic realities, design challenges and cultural touch points will continue to evolve through new mediums of expression going forward.ED: How did you finalise and settle on these 10 designs/products?SG: Each of the 10 objects have been designed in housekeeping in mind the different materials and techniques and examining them through a lens of culture, history and traditions – all objects of which are personal to me, and at the same time extensions of the brand.ED: Tell us about the historical and symbolic meanings behind the designed objects…SG: Each object has a story and journey of its own – they are a culmination of inspirations and celebrations of the vast cultural histories across the country.Bhuta: This armour is worn by the Theyyam dancers of South India, who wear elaborate costumes and jewellery to channel the voice and spirit of the divine. Traditionally cast in brass, ‘Bhuta’, is made from glass and coiled with cobras attributed to Lord Shiva. Churan: Through two flavours of churan – Jonu and Bablu – we acknowledge the humble properties and pungent flavours associated with this ancient Indian digestif, an ideal complement to many meals.

Each is a considered mixture of powdered herbs and minerals made by Shri Vaidhya Bholaram Agarwal, a third generation Ayurvedic specialist in Kosi, UP.Lion: A creature of legend & king of the jungle, the lion ‘Nahar’ radiates strength and magnificence. Adapted from the 13th-century bronze Monzón lion, this feline is cast in iron with a patina that evolves over time, almost as it were alive. It represents a shared history of heritage and craftsmanship, from many possible eras and geographies.Bowl: Reminiscent of the luxury and exquisite craftsmanship of the Mughal era, Jahangir is a hardstone bowl carved from a single rock crystal quartz, inlaid with four radiant pear-shaped rubies.Bull: This terracotta bull sculpture is adapted from an Iranian Rhyton circa 1000 BCE. ‘Bail’ references the shared aesthetics, techniques, materials and craftsmanship from across the world, indicative of forms that retain a remarkable sense of continuity from the past. Puppet: An important part of oral storytelling and common narrative, India’s love of puppetry ‘Puthla’ is a mannequin form, an interpretation of beauty often sought out by the various kathputlis of India.Brooches: A trio comprised of an acrobat, lion and angel lead to many possible narratives. The motifs of ‘Taslees’ have travelled across our textiles and various textile histories, an indication of their strength and continued relevance.

Music: Defining music is as subjective and limitless as the sound itself. Whether through chorus or solo, words or expressions, accompanied by instruments or acapella, we have explored unconventional and colloquial expressions through various genres and geographies.

Feet: While displaying his prowess, Angad put one foot forward and said if anyone can move my foot then we will give up Sita and Rama will go back from Lanka. Many brave warriors from Ravana’s court tried to lift Angad’s foot but in vain. Then a group of rakshas tried to collectively lift Angad’s foot but they could not do so.

Serveware: Influenced by the serve-ware of Chettinad, this once common household commodity was crafted in different shapes, intending to serve a particular portion of a meal. ‘Bartan’ is handcrafted in brass, intending to last generations and witness many meals hosted with friends and family.ED: Does this mean we will see more of these product innovations at Raw Mango or it was specific to your 10th year anniversary?

SG: We have launched this series to commemorate our 10th anniversary, at the moment there aren’t plans to launch more objects, however, the opportunity may arise again!ED: Will these motifs reflect in your collections?

SG: Our textiles and objects are interlinked – one has not come from the other bu, are part of the same design vocabulary.ED: Your favourite object and why?SG: All of 10 objects have been created in sync with my design sensibilities as well as my personal aesthetic with a shared approach – I am unable to pick up a favourite as every single motif speaks to me.