; A neo-traditional home by Vedanth Design Studio in Bengaluru 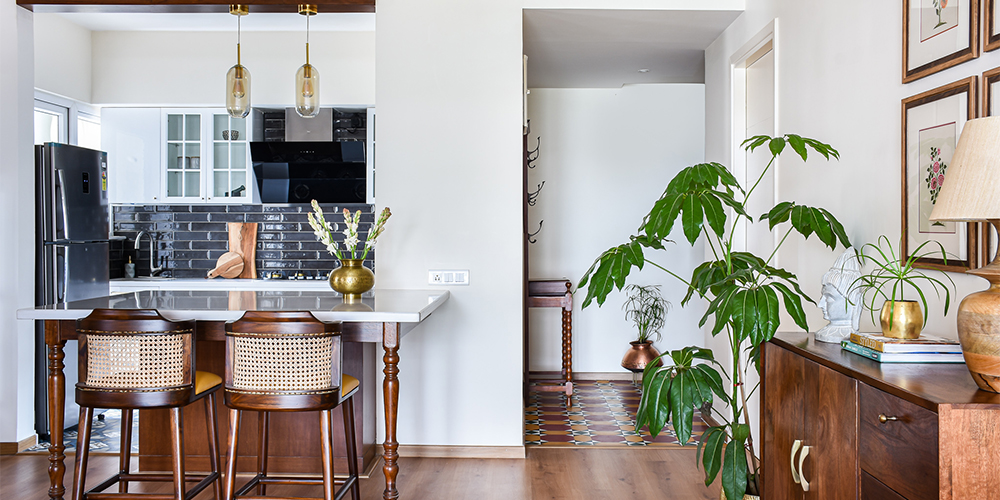 Balance in texture is displayed through a custom-made hardwood sideboard and Ceramique tiles seen in the kitchen and foyer flooring. Pendant lights from The White Teak Company and a Good Earth brass vase completes the dining area; Photographs by Nayan Soni

Heirloom pieces inherited from client Rajeela and Shrinivas Bhat’s ancestors paved the way to the design philosophy of this beautiful Bengaluru home designed by Vedanth Design Studio. Situated on Outer Ring Road, the home has a beautiful pillar sourced from Puducherry adding character to the space, along with traditional architecture seen through teak furniture pieces, colourful heritage tiles and heirloom pieces passed down from generations.

Displaying hints of the Chettinadu style of home décor this three-bedroom apartment is spread across 1800 sq ft. “Since the client had seen one of my previous projects (a Chettinadu Style inspired Villa), they were confident about my design instincts and gave me a free hand,” reveals Nehal Shanghavi, interior designer at the Bengaluru based design studio.

“I love the warmth that wood and rattan introduce to any space and the drama and interest that metal and greens create,” shares Shanghavi. Material play is depicted in the oval hardwood TV cabinet with hints of rattan combined with very modern planters from Studio Plaza and a hammered brass coffee table in the foreground showcases Shanghavi’s signature style.

The kid’s bedroom also nods to contemporary design. “Yes, we managed to pull it off—bringing down space to a little boy’s room, who is fascinated by stars and planets,” shares Shanghavi. The alluring wallpaper from Asian Paints steals the show in this room and transports us right into space!

The highlights of the home according to Shanghavi is the relic desk that tells a story against the bare brick wall. “Few books were almost a hundred years old. The little brass stationary holder (that belonged to my client’s grandmother) and the old world switch box evokes nostalgia to the library corner,” shares Shanghavi. Numerous books, ranging from The Pride & Prejudice (1920) and The Complete Works of William Shakespeare (1939) that belonged to the client’s great grandparents are carefully arranged in the home.

Further adding that the client wasn’t too keen on having a formal dining space for two reasons, “Space constraints, since the pillar bit into a share of the walking space around the dining area and having a six seater dining would make the room feel very cramped.” Besides, “as a brahmin family, most elders in the clients house used the mani (low wooden stool) to have their food on and we had to make room for that,” she says.

Interestingly, the initial idea was to have a folding dining table on the wall where the sideboard is currently fixed. It can be opened and used occasionally when need arises or when guests arrive. However, it did not seem like a viable option both in terms of design aesthetics and functionality. And so, “After some contrivance, we came up with the idea of having an oversized island which also serves as a dining table, consisting of five seats (three rattan tall chairs and two stools),” informs Shanghavi.

“The little library nook is hands down the space I enjoyed designing the most,” shares Shanghavi elaborating on how naturally and organically the nook came together. Fascinatingly, “the 110-year-old teak desk felt like it belonged there,” says the designer. The floating shelves that adorn the brick wall were upcycled from an old teak unit that had fallen apart, exhibiting a curio camera, a collector’s piece.

Overall, the color palette of the home is mostly earthy and warm. Showcased through various heirloom teak wood and cane woven furniture, an antique pillar, rafters and the custom made brick wall. Moreover, colorful rugs, hand painted wall art pieces, brass accents and fresh greens, not only accentuate the complete look of the space but are also instrumental in breaking the monotony of the earthy tones. Aren’t you loving this modern take on contemporary design? Because we surely are!

If you loved taking a tour of this impressive home, you must check out Neev and The Monsoon Terrace, a dreamy home in Juhu designed by Tejal Mathur