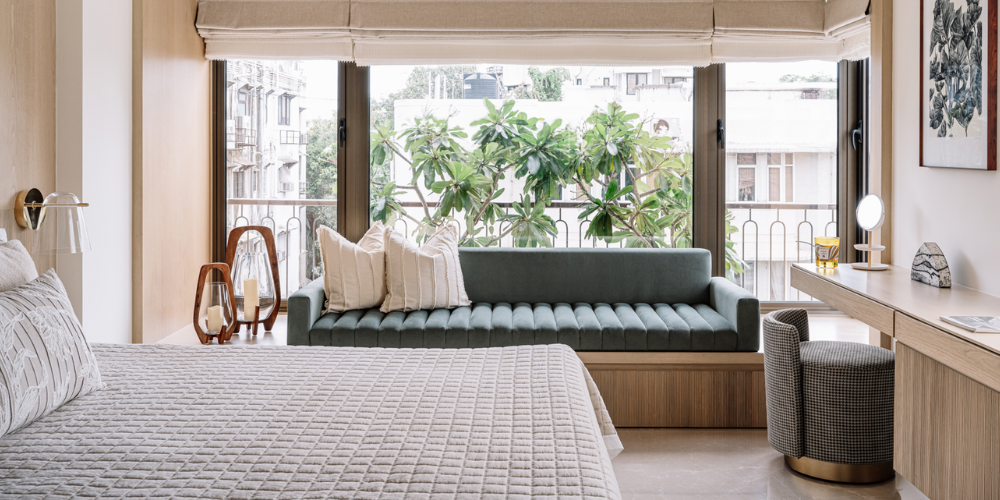 A well-ventilated room with serene interiors and a big balcony for the daily dose of Vitamin D is all the family needs after a hectic day at work; Photography by Ishita Sitwala. 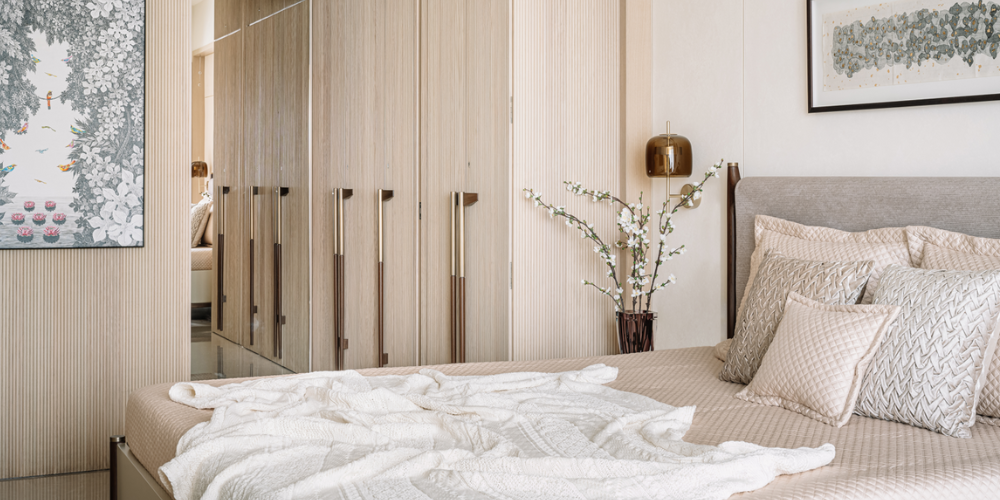 With an expansive closet space and soothing decor, this space designed by ns*a Architecture and Interiors spells pure comfort; Photography by Ishita Sitwala.

The city that has enchanted far and wide for years at end, Mumbai is a mix of old-world heritage charm with a striking contrast to modern high-rise structures. And in between all the city bustle lies this inspiring three-bedroom home in South Mumbai.

Composed by Neesha Alwani and Shruti Jalan of ns*a Architecture and Interiors, the home is astutely conceptualised for homeowners to unwind and relax after a hectic day.

The clients didn’t want an overly cluttered house. Given that a slew of houses in Mumbai are tighter when it comes to space, the homeowners sought a well-ventilated house with enough daylight.

Something soothing to the eye was the goal hence a neutral palette was chosen to make the house look voluminous.

As a designer, Neesha thrives when it comes to understanding the home dweller’s requirements. For her, every home is unique and so are the people living there!

Tour every turn of this couthy home

The entrance of the cosy apartment starts with a quaint little corridor that gives off vestibule vibes. Moving further, one will see the kitchen and staff area to the left.

Next up comes a door that takes you to the private spaces of the house. The living and dining area with a small nook for the white marble mandir on the right. The mandir has a marble panel with a deep etching of flowers alongside a shlok, which is laser cut and has a backlit form.

Going further ahead, you see 2 bedrooms on the right which belong to the couple’s kids; a son and a daughter. These rooms are adjoined; on the right is the son’s room which uses colours like white, brown and oak to compliment the overall theme of the home. On the left, is the daughter’s room with its floor to ceiling veneer panelling and bay window.

Towards the left is the primary bedroom. Brimming with shades of oak and beige, this room also has a cabinet which fits the aesthetic of the room like a perfect jigsaw alongside a walk-in closet and bathroom which has Burberry and onyx marble.

Since the front of the house is west-facing, there are no sea views. Rather, the view is of different lanes which Neesha artistically covers up to create a visual balance with the rest of the house. Furthermore, the windows of the apartment have been lowered to add a continuous planter which looks like a step-out balcony.

Since Mumbai doesn’t give any open views; the city being a concrete jungle has the view of one apartment in front of the other, Neesha wanted to create an oasis for the family. To give the family privacy, multiple planters are added to each area which lights up in the evening which gives the neighbours only a green patch to look into and keeping the family cocooned in their oasis!

The daughter’s bedroom with its frangipani tree and bay window seating is Neesha’s personal favourite.

“The daughter’s bedroom is the highlight for me because it kind of adds a lot to the room. You have that corner window, allowing natural light to come in that makes the room much brighter and is a cosy nook to relax and unwind. We boxed in an entire (window) in oak wood. If you see the frame, we have created a built-in couch within the bay,” muses Neesha.