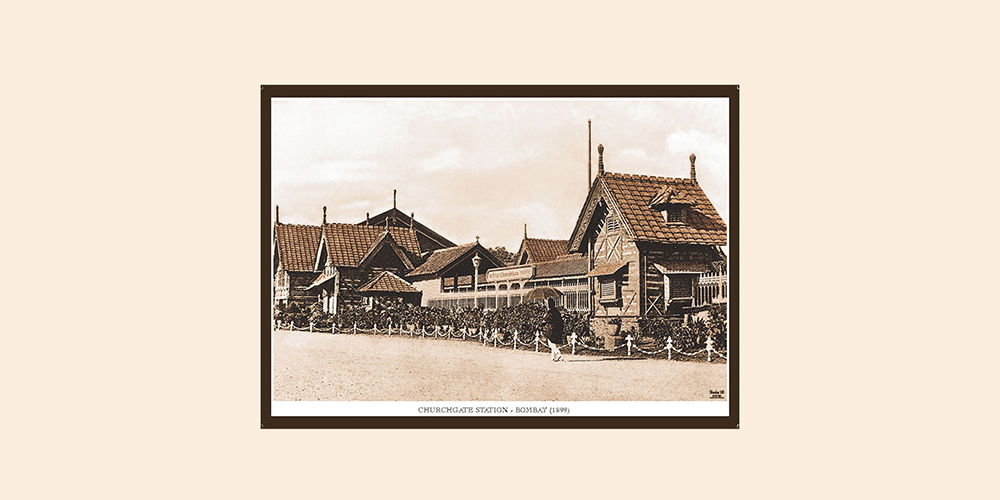 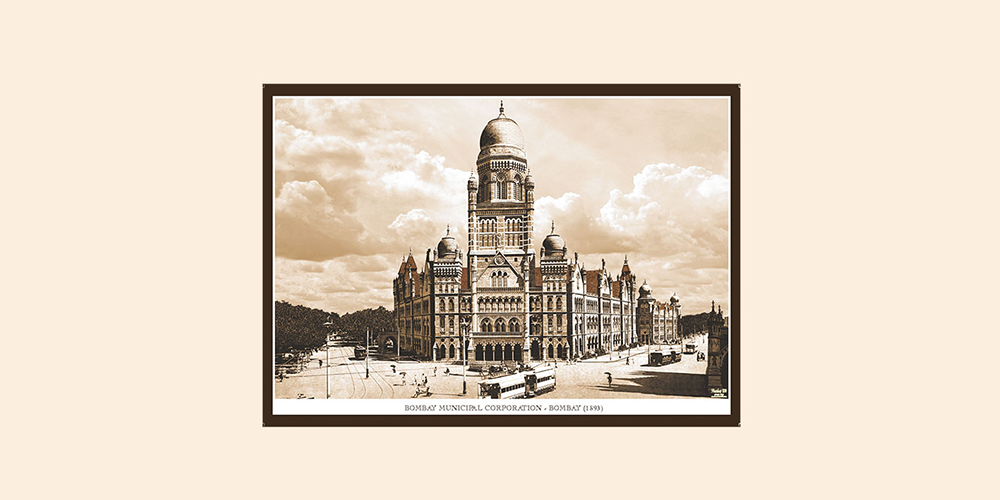 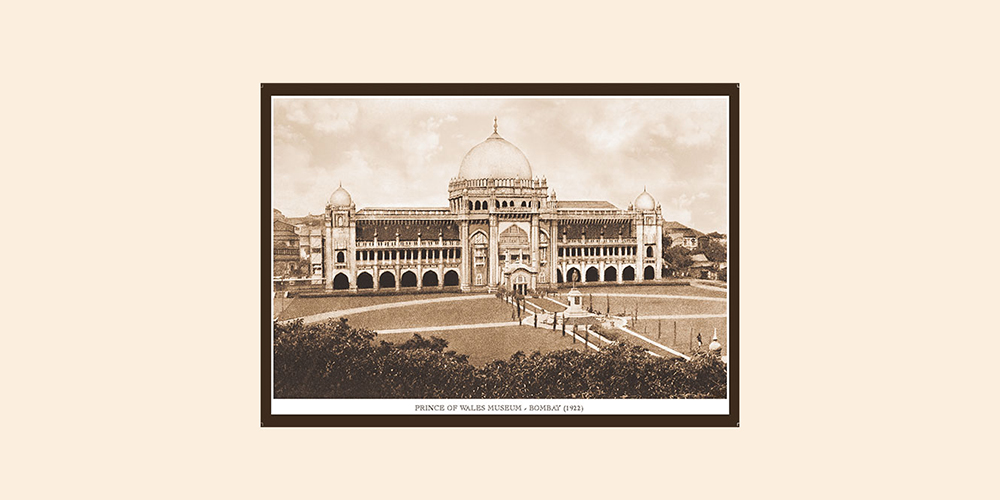 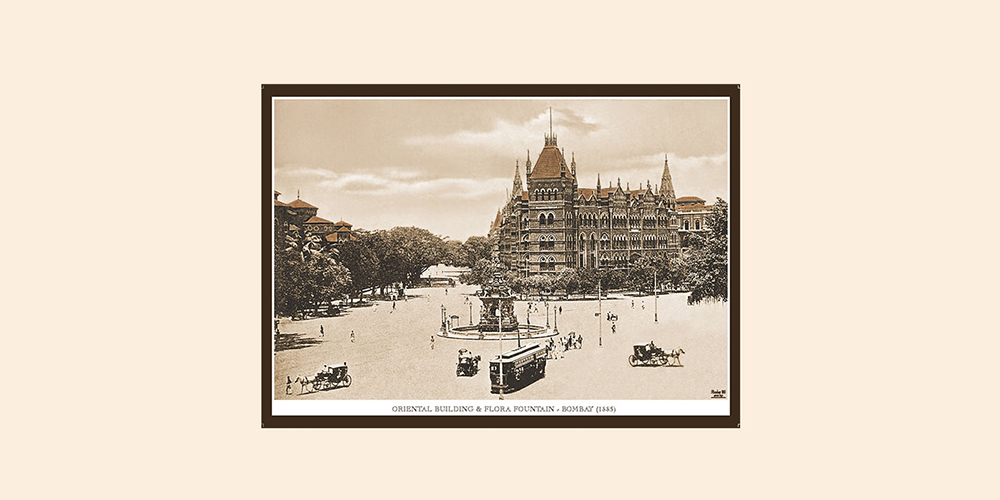 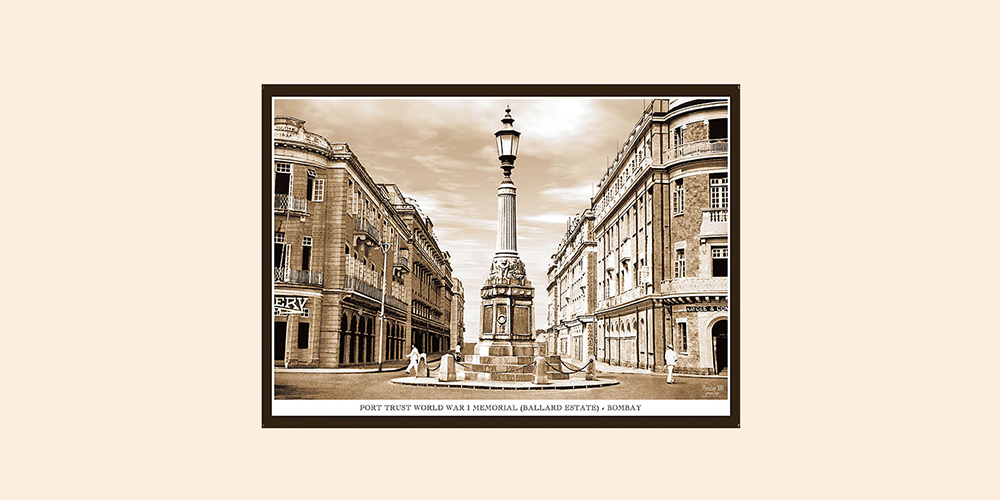 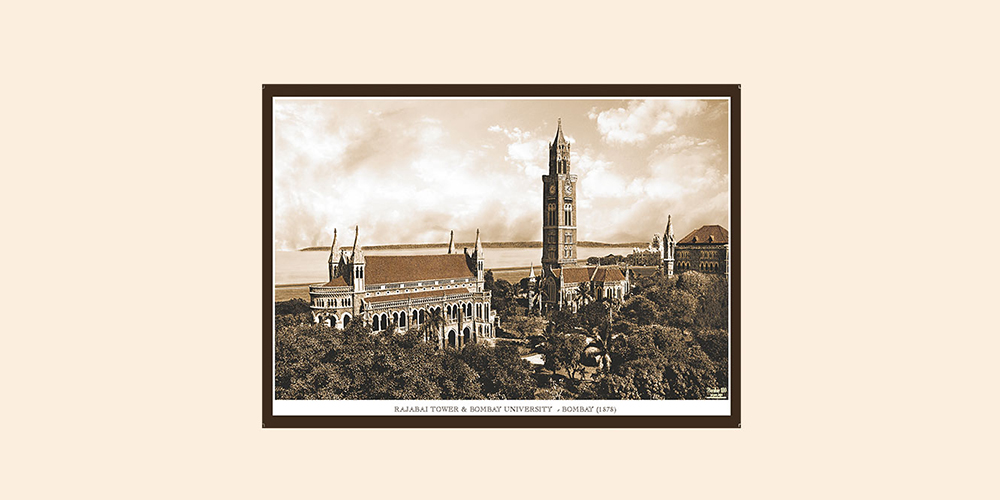 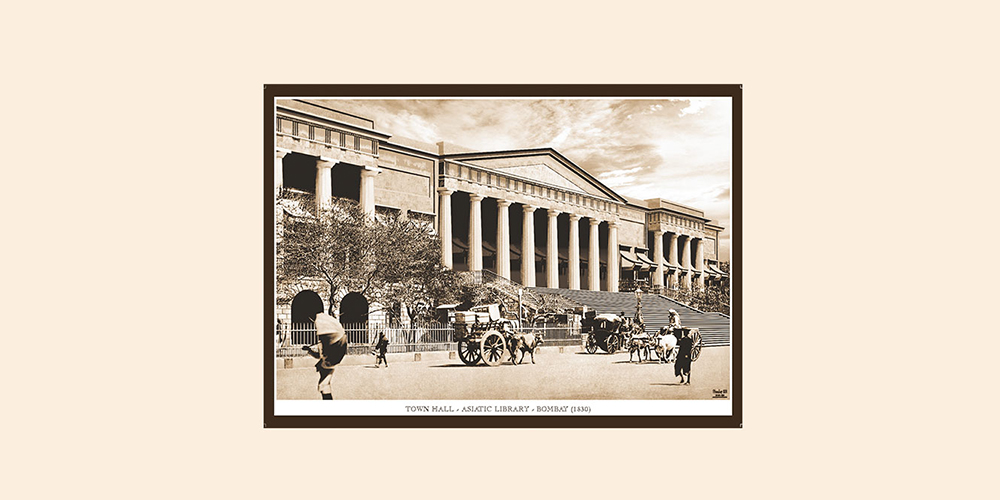 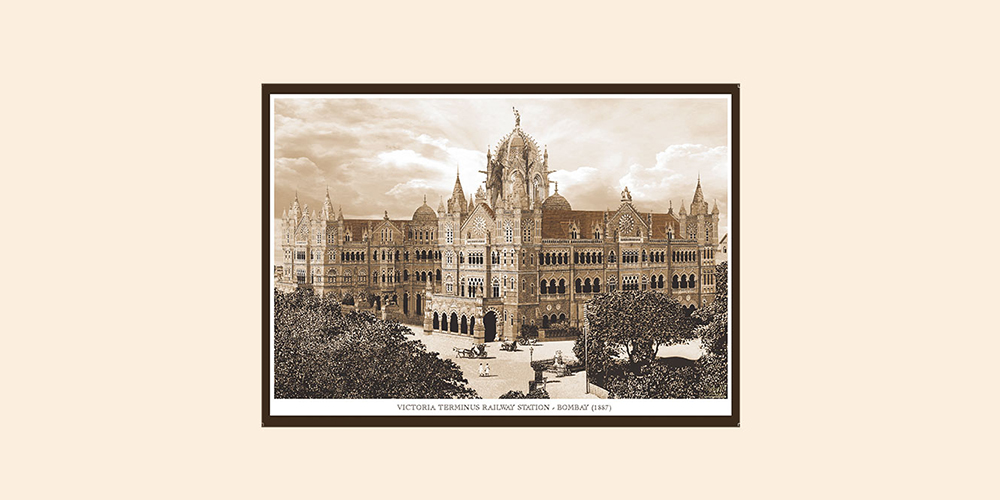 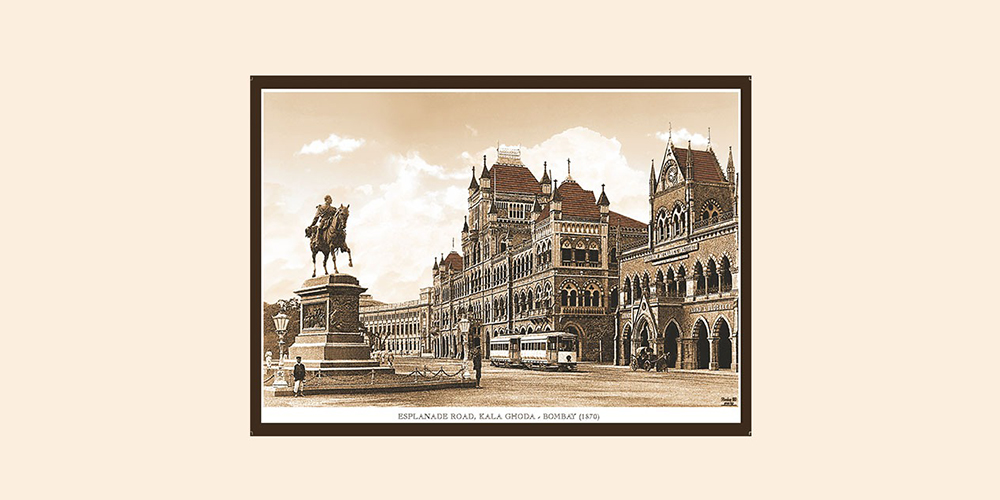 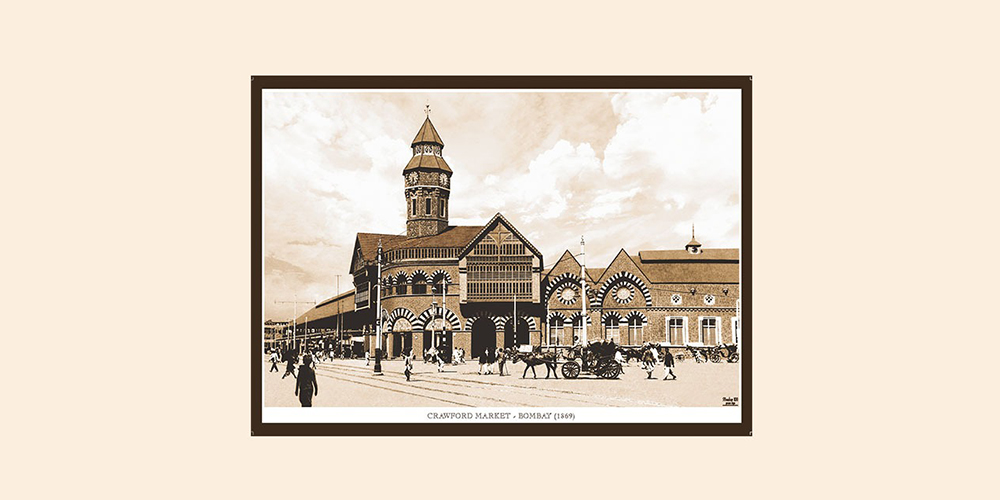 The downpour and extended lockdown in Mumbai has kept us indoors for way longer than we’d imagined—and we’re starting to feel nostalgic about the city. So, we’ve flipped through the exclusive and authenticated, limited edition archival prints on Magnate Publishing House’s Bombay 100 years ago that offers a peek into the rich heritage and history behind the landmarks that make up modern-day Mumbai.

Scroll below to read about our favourites from the tome…

Churchgate Station (1899)
The southernmost train station in the city since the 1930s is named for its location—Church Gate Street. It’s here that the first electric train ran from the south to north of the city back in 1928. The building was constructed in 1899 under the supervision of Fredrick William Stevens in an Indo-Saracenic style.

High Court (1878)
Inspired by the revival of English Gothic style, Colonel JA Fuller designed the high court using local black basalt. The building is 171m-long, 57m-wide and has two octagonal towers. At the top are statues of the Goddess of Justice with a sword and the Goddess of mercy with folded hands.

Bombay Municipal Corporation (1893)
Renamed as Brihanmumbai Mahanagar Palika, this heritage building is another gothic wonder by FW Stevens, whose foundation stone was laid in December 1884 by Lord Ripon. Its preeminent architectural feature also includes the central dome—although this one is 71.5m-high with a winged allegorical figure to symbolise “urbs prima in Indis” or “the first city of India”. With a ceiling of unpolished teak in the council chamber, the tower rises to 77.7m in height and has a bronze statue of Sir Pherozeshah Mehta at the entrance.

Prince of Wales Museum (1922)
Built-in 1922 to commemorate the visit of the Prince and Princess of Wales, this Indo-Saracenic styled museum stands amid palm trees and flower beds. The architecture of this three-storeyed structure is also inspired by the Mughals, Marathas and Jains. Materials like basalt and Kurla stone were used for the dome that’s surrounded by a cluster of pinnacles topped with miniature domes.

Oriental Buildings & Floral Fountain (1885)
The Oriental building was among the first few to be completed in 1885, costing ₹87,000. Nearby, Flora Fountain has been standing since 1864 (it was built for ₹47,000)—designer R Norman Shaw executed the structure, while James Forsythe sculpted the imported Portland Stone. Initially, the fountain was named after Governor Frère but was later renamed after the Roman Goddess who inspired part of the design.

Post-Trust World War I Memorial (1924)
In the shape of a carved sandstone lamp post with winged lions carved on its base, the Mumbai Port Trust alludes to World War I and its war efforts. The memorial features brass plaques on three sides and is a reminder of the city’s dock at the time.

Hotel Majestic and Waterloo Mansion (1909)
Designed by WA Chambers in Indo-Saracenic style with domed minarets, the hotel stands beside the residential Waterloo mansion or Indian Mercantile Building as it is known today. The latter is known for its gothic architecture and turrets, point arches and black stone facades. Both the structures overlook Wellington fountain circle, otherwise known as the Regal circle.

Royal Bombay Yacht Club (1846)
This is one of the oldest clubs in the city, renowned for its gothic style. Built by John Adams and supervised by FW Stevens, the structure was entitled “royal” in 1876 by Queen Victoria. It has since been visited by royalties, including the Prince and Princess of Wales.

Rajabai Tower and Bombay University (1878)
Once the tallest structure in the city, Rajabai Tower was designed by English architect Sir George Gilbert Scott and was modelled on London’s Big Ben. Its construction cost was covered by Premchand Roychand—the very entrepreneur who also established the Bombay Stock Exchange—on the condition that the tower be named after his blind mother so that she could hear the hourly chimes and tell when it was time for her dinner. The gothic-styled institution is seen beside it.

Taj Mahal Palace Hotel (1903)
This landmark property was commissioned by Jamshedji Tata in Indo-Saracenic style. The total cost of construction for this project was a hefty £250,000 (₹2,43,61,775) and had creatives such as Sitaram Khaderao Vaidya, Ashok Kumar, DN Mirza and an English engineer from WA Chambers on board.

Town Hall (1830)
Established as Tondal in the 19th century, this structure is currently home to the Asiatic Society of Mumbai. The 61m-long heritage structure is influenced by Greek and Roman architecture through the design of its portico and eight Doric columns. We love its old parquet floors, spiral staircases, wrought iron loggias and exquisite marble statues of eminent citizens.

Victoria Terminus Railway Station (1887)
The then-base of operations for the Great Indian Peninsula Railway is inspired by the gothic style. Designed by FW Stevens, the terminus features a 5m-high central dome with a figure of a woman holding a flaming torch in her right hand and a wheel in her left. The terminus was named after Queen Victoria and was inaugurated on the day of her Golden Jubilee. Now rechristened Chhatrapati Shivaji Terminus, the structure is recognised among UNESCO’s heritage sites around the world.

General Post Office (1913)
The central post office of Mumbai, popularly known as the ‘GPO’ is an excellent example of Indo-Saracenic architecture, designed by British architect John Begg. The 12,000 sq ft features black basalt with a dressing of yellow Kurla stone and white stones from Dhrangdra. One of its most memorable aspects is the ethereal central hall that rises to the great dome. A tidbit to consider is that over a century ago, it was built at the cost of ₹1,809,000.

Esplanade Road (1851)
Renamed Mahatma Gandhi Road, this route in Kala Ghoda is lined with heritage structures including Elphinstone College and David Sassoon Library. Established in 1956, the college is inspired by Romanesque Transitional style and had cost ₹750,000 to build. Meanwhile, the library was completed in 1870 using yellow Malad stone.

Crawford Market (1869)
Named after Arthur Crawford, the city’s first municipal commissioner, this is a marvel that was gifted to the city by Sir Cowasji Jehangir. It combines Norman and Gothic architecture across its 6,000 sq ft area. A skylight built 15m-high illuminates materials such as coarse buff coloured Kurla Stone with red stone from Bassein that were used in the construction. The market has since been renamed Mahatma Jyotirao Phule Market.