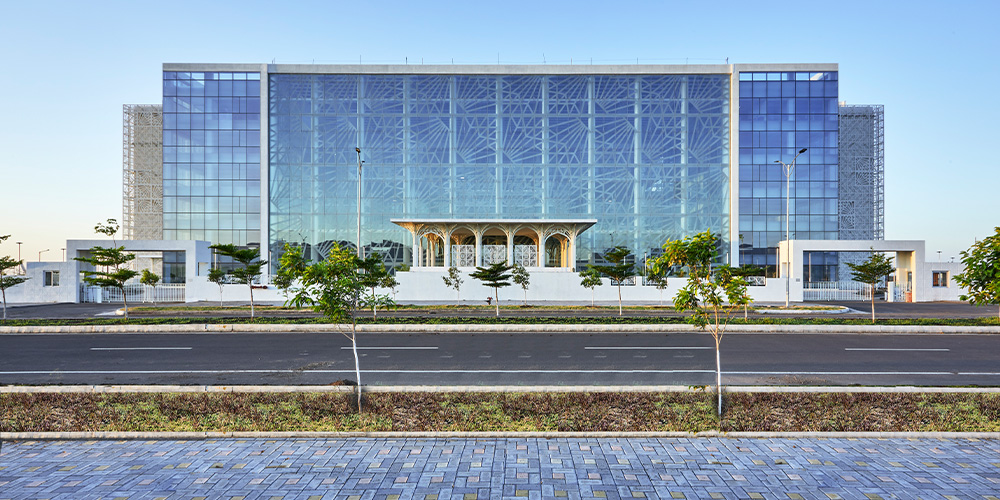 Auric Hall is a portrayal of reimagined Mughal architecture conceptualised by Rahul Kadri and IM Kadri of IMK Architects; Photographs by Rajesh Vora 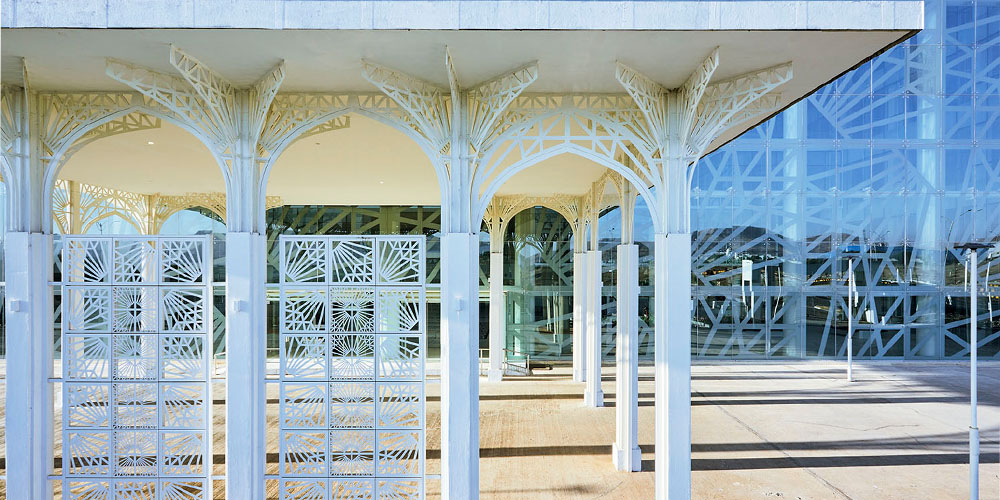 Screens with latticework are placed between pillars at the entrance; Photographs by Rajesh Vora 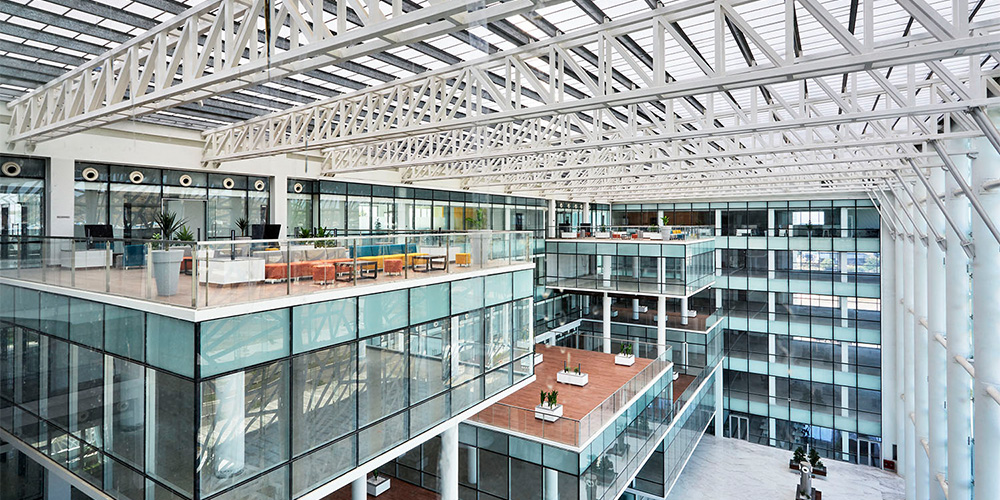 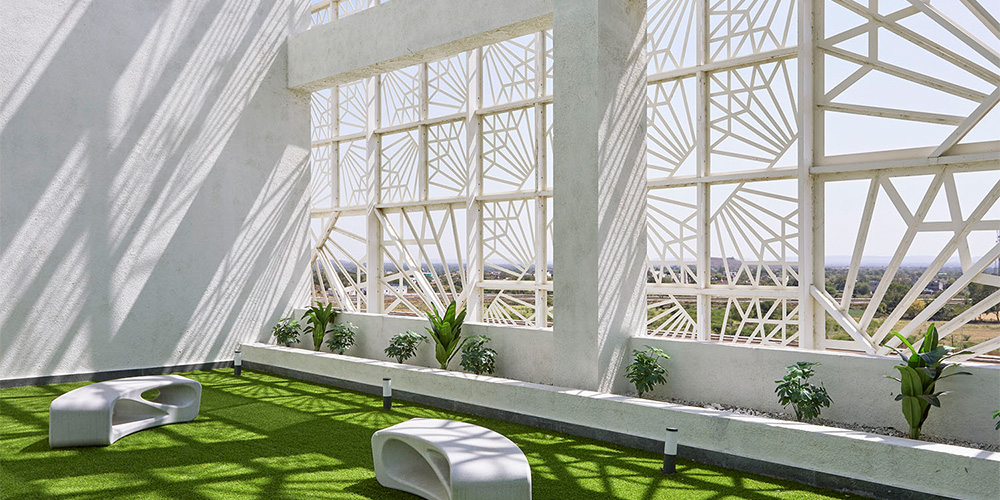 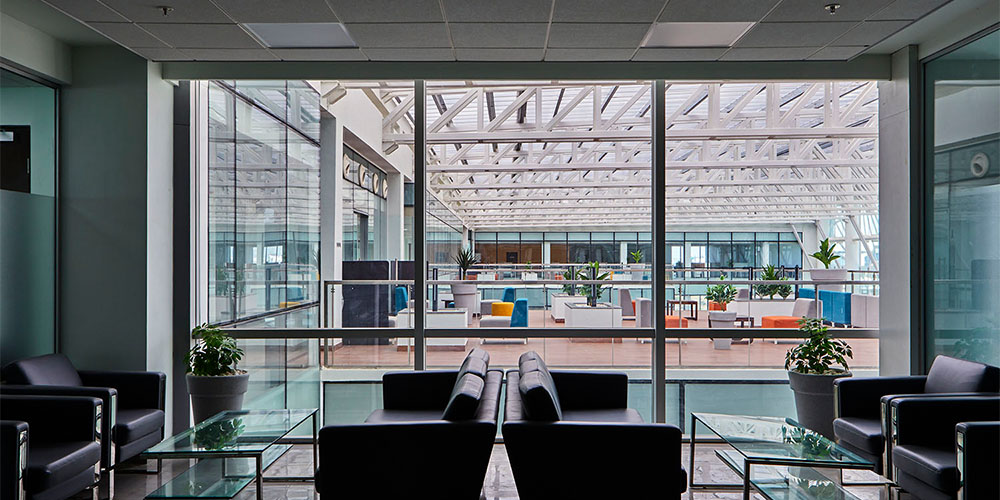 Most offices in Auric Hall follow an open layout; Photographs by Rajesh Vora 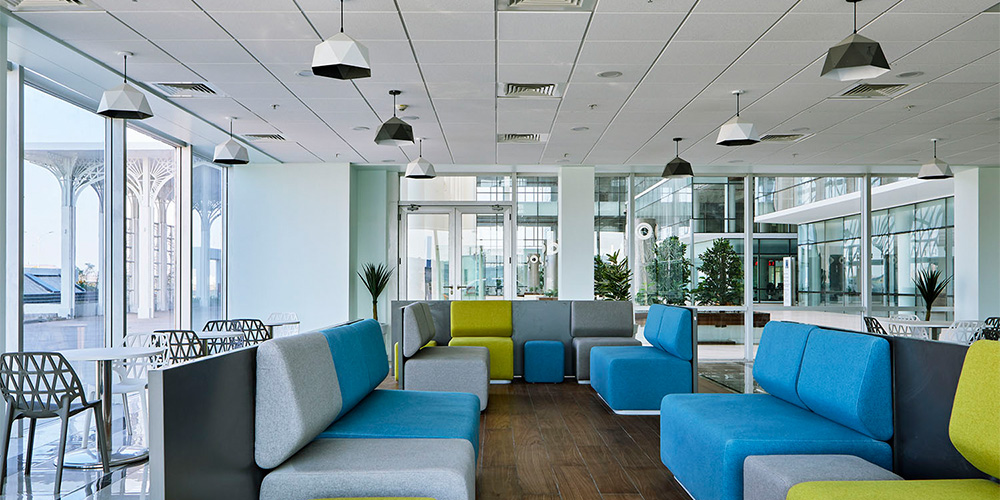 Inside the glass structure, colour is introduced with the help of vibrant pieces of furniture; Photographs by Rajesh Vora 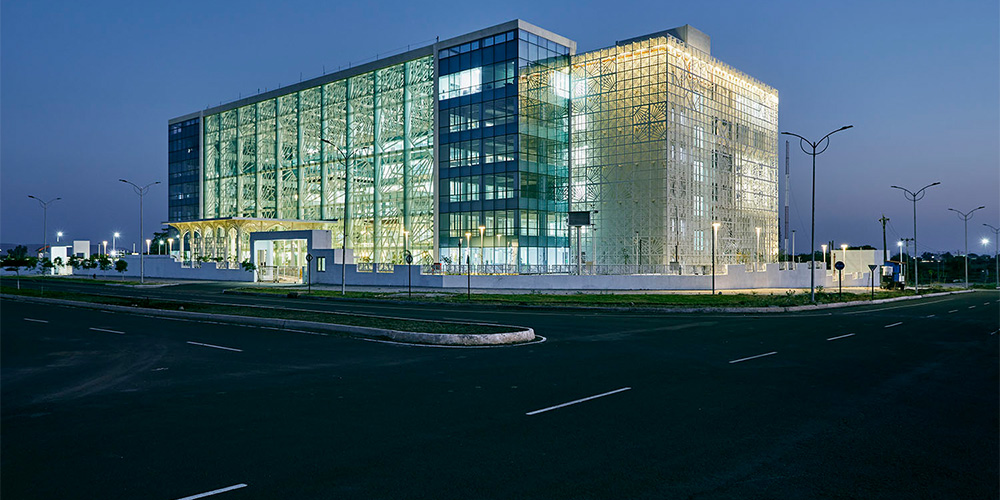 A view of the majestic edifice after dark; Photographs by Rajesh Vora

Hailed as one of India’s most promising and ambitious infrastructure programmes, the Delhi-Mumbai Industrial Corridor (DMIC) aims to infuse upcoming industrial cities with state of the art technologies. Of these, one of the first few gearing up to become a greenfield and smart city is the Aurangabad Industrial City (Auric).

This landmark District Administrative Building colloquially christened Auric Hall in Aurangabad is conceptualised as the face of the upcoming development in the city. Serving as the monitoring, administrative and sales hub even, its design is transcendent and inspirational to match its functionality.

Known for a wide range of biophilic projects, IM Kadri and his son Rahul Kadri, directors of Mumbai based practice IMK Architects, achieved just this by crafting an efficient and timeless edifice with inbuilt spaces that encourage internal dialogue and exchange of ideas.

Keeping in mind the city’s long tradition and love for majestic gates (as seen in many of its monuments), ceremonial gates mark the entrance for Auric Hall. Iconic historic references such as the Char Bagh and the famous Paan Chakki water mill influence the landscaping that abuts the internal driveway and the cascading water body at its centre, respectively. Also seen are a series of magnificent arches, laced with intricate jaalis that are reminiscent of the old city’s tomb complexes.

The creatives sought inspiration from the layouts of Mughal building complexes, their multiple envelopes and enclosures that lead from public to private. The first layer is that of open and verdant arenas, cocooned between a screen and the main building. As one ventures further, the range of public spaces gradually connect to the interiors of the building.

While the exterior facades celebrate symmetry, a common characteristic of Mughal construction, the interiors unfurl a couple of asymmetric zones with varying volumes to promote engagement, visual connectivity and collaboration. The porch leads to a linear yet capacious atrium, enclosed by offices on three sides.

As tall as the building itself, this central space is clad in large, glass panels with ceramic fritting. It’s also here that an exhibit of Aurangabad’s rich history includes a display of artworks. The surrounding offices too are lined with glass walls that are effective in combating glare, heat gain and excessive wind pressure. Meanwhile, the roof truss and facades have been made using steel to allow structural flexibility, durability and higher load carrying capacity.

Designed as a collage of offices and open spaces, every lift lobby opens out to a green, double heighted terrace. Each floor also has access to multiple terraces—both outdoor or cantilevered—that overlook the atrium and serve as break-out zones.

The grandeur approach in the modelling of this property is evident in its sustainable features as well. Awarded with an IGBC Gold Performance, testaments to its eco architecture include numerous open and semi-covered spaces, natural landscaping, the use of jaalis that shield from the harsh sun and increase airflow, and waterbodies to bring down temperatures.

Additionally, water conservation measures have been adopted by maximising plantation areas with controlled irrigation. The use of solar panels and energy metering systems along with harvesting runoff from paved surfaces and terraces are all attributes that ensure Auric Hall is a well rounded masterpiece.