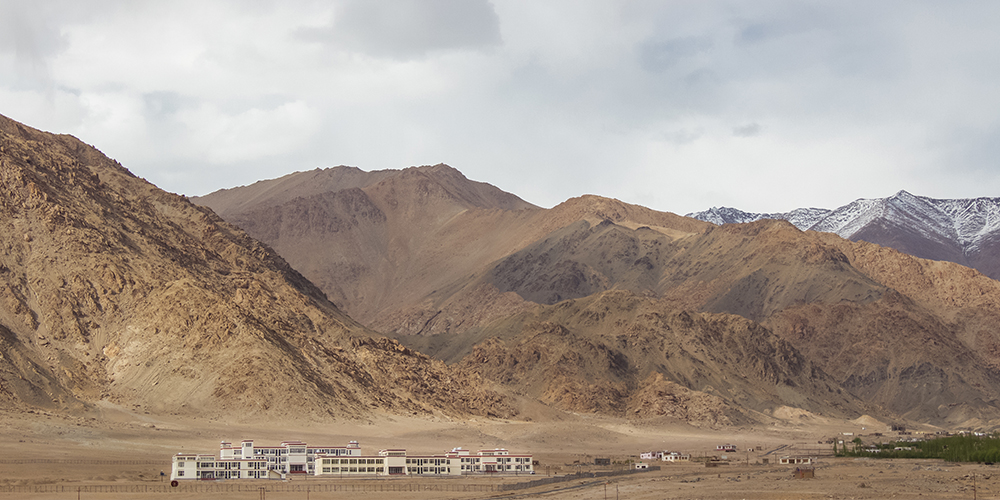 University of Kashmir's Leh satellite campus is conceptualised by ANA Design Studio along the contours of the gently sloping valley—such that each building sits on its own “pedestal”; Photographs by Mohd. Amin Nayyar 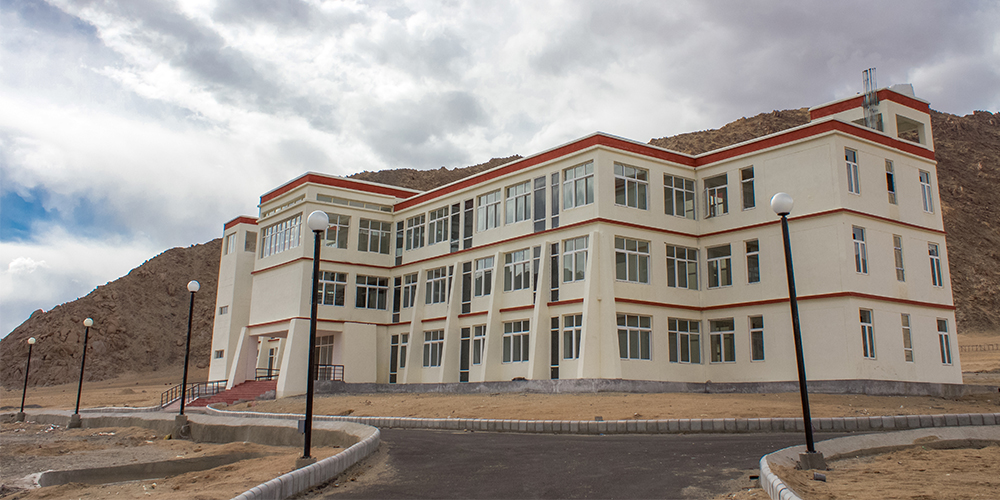 Both the buildings on campus—one for teaching facilities and another for administrative—are RCC formed structures; Photographs by Mohd. Amin Nayyar 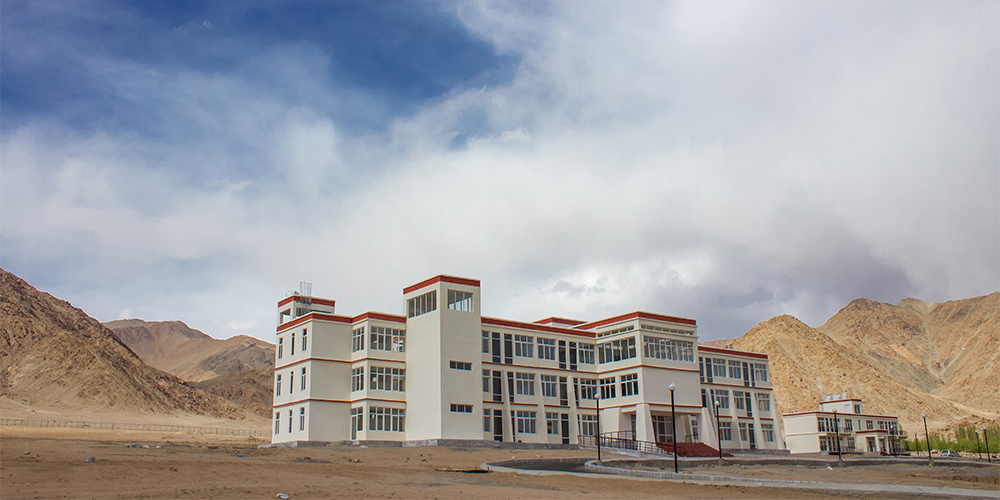 The buildings are completely insulated, by using a cavity wall system and polystyrene infill panels; Photographs by Mohd. Amin Nayyar 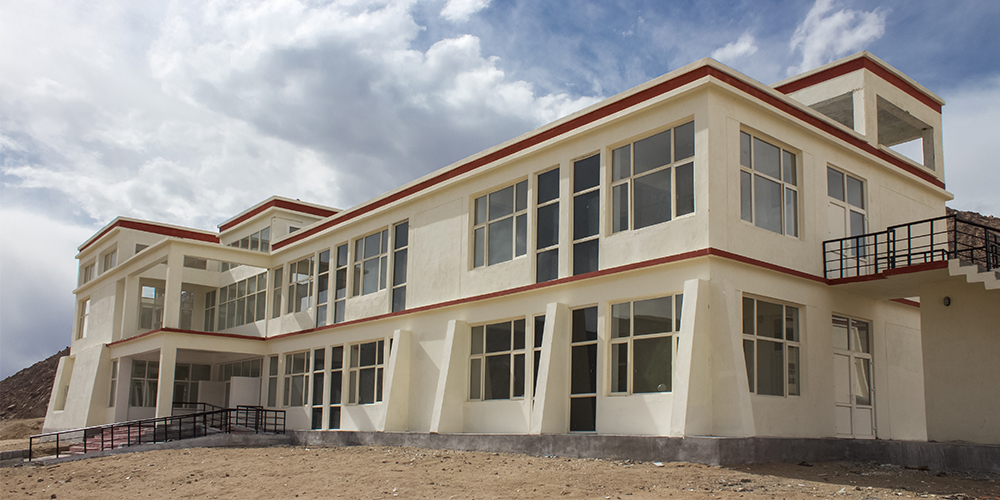 The entire fenestration system is designed to have a mix of double glazed, thermally performing glass as well as a set of “trombe walls” to trap solar heat; Photographs by Mohd. Amin Nayyar

“Breathtaking” is a double edged sword in Leh. There are tomes written about the majesty, grandeur and the raw beauty of Ladakh, and for those who have travelled, and had a bout of altitude sickness, it’s quite something else.

The mountains, and the shadows cast by clouds in different seasons create a mesmerising kaleidoscope of colour and texture. And yet, for those who live there, the weather and the altitude are a formidable companion to live with. And if that was not enough, it is a highly unstable, seismically active geology!

How does one, then, create a built environment, that is “suitable”? A simple word holds the answer: Research.

I’ve been fortunate because a few of us from the team have visited Ladakh before. Plus, during my graduation from Delhi’s School of Planning and Architecture, I had the opportunity of being a part of a research team that studied the monastery of Spithuk.

Armed with faint memories of the time, a lots of bookish knowledge and faith in the ability of our team to simulate the building performance, we embarked on the journey of the design for the Leh Campus of the University of Kashmir.

Apart from the regular aspects of space planning and structure as well as budgets, we were also dealing with a new relationship with the university. It’s no secret that this is a crucial relationship as the client plays a pivotal role in the design outcome.

Thankfully, for us, while the university team expressed concerns and enumerated limitations, the administration and engineering teams were incredibly supportive and open to new ideas. The challenge, really, then was not only to deal with nature, and the elements but also work within extremely tight administrative norms and procedures.

For instance, the build had to be carried out using registered, speciality contractors for various trades, under the state’s Public Works Department. The local council was very keen to understand the design and especially the language of the architecture. There were also certain motifs and prints that had to be mandatorily used in the structure.

Within the constraints of the traditional procurement and tendering process, and the sensibilities of the local populace, we also wanted to establish our own principles and philosophies, of place making, energy efficiency, passive design and functionality.

We had to contend with an RCC formed building—our efforts, at the time, to use pre-fabricated steel, failed. However, we insisted, and prevailed in a few things that set the tone for the performance of this campus. This paved the way for the university’s other buildings to be eventually built.

The buildings are completely insulated, by using a cavity wall system and polystyrene infill panels. The windows are made using high performance UPVC with steel inserts, and all functional spaces are double glazed. They are designed for universal access, with gently sloping ramps connecting both floors of the teaching departments. All the waster water is treated on-site, and high performance LED fixtures illuminate the structures.

Indeed, the campus is designed along the contours of the gently sloping valley. Each building sits on its own “pedestal”. Not only is it an architectural “place” for good weather but it also allowed us to have no buildings sited on filled soil. It allowed for a natural course to be created for cloudbursts, without harming any buildings. In fact, our careful siting, allowed for the entire campus to be built, without any retaining walls.

Classrooms, labs and offices are located around a simple, linear atrium space, which is protected from wind and filled with light. All functional spaces were aligned such that they received sunlight from the south and west.

The entire fenestration system, is designed to have a mix of double glazed, thermally performing glass, and a set of “trombe walls” in each space. These surfaces trap solar heat by allowing a small air gap between the external glass, and an internal thermal mass—in this case, a concrete block wall painted black. We used this thermal current to move warm air into the living space, and suction out cold air from near the floor into the Trombe wall space; thus setting up a natural, convective heating process.

While it hasn’t been possible for us to carry out a scientific monitoring of the spaces, students sitting in their shirts with sleeves folded up in the rooms, while outside temperature was recorded at 7-degrees Celsius, is a warm vindication of the design.

The cycloped walls also act as thermal mass for the gaining daytime heat as well as a tribute to the traditional forms of monasteries dotting the landscape.

The campus is currently comprises two buildings. The first houses teaching facilities, faculty rooms and lecture halls as well as a small residential block for resident teachers and staff. The second accommodates the administrative wing with offices, a conference facility and archives.

The buildings are sites for maximum heat gain, framing views of the valley and creating “courtyard” spaces by acting as wind breakers for each other. As the campus grows, we hope, it will continue to provide educational infrastructure for the local population, and we will be able to continue improving the design, technology and performance of the buildings.