Alice von Baum and Aadil Salim collaborate to fashion this charming villa in the quaint village of Bardez, Goa 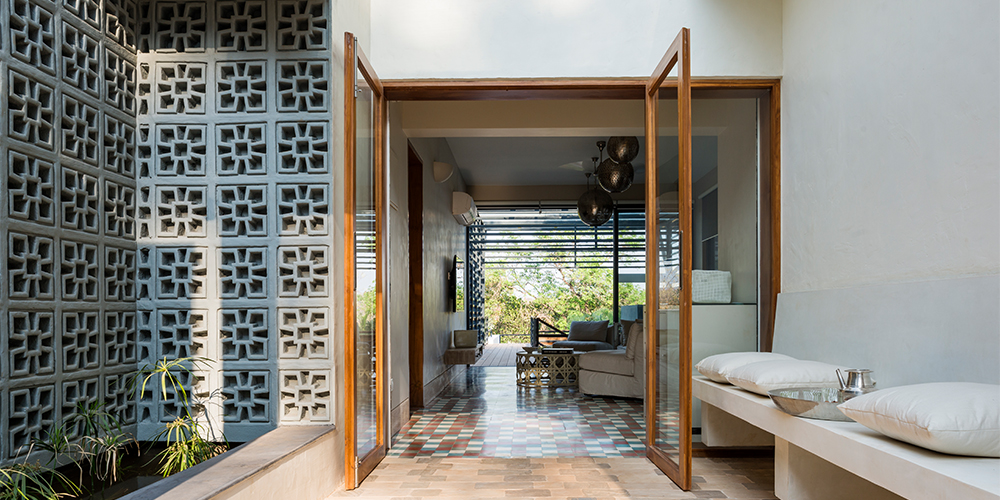 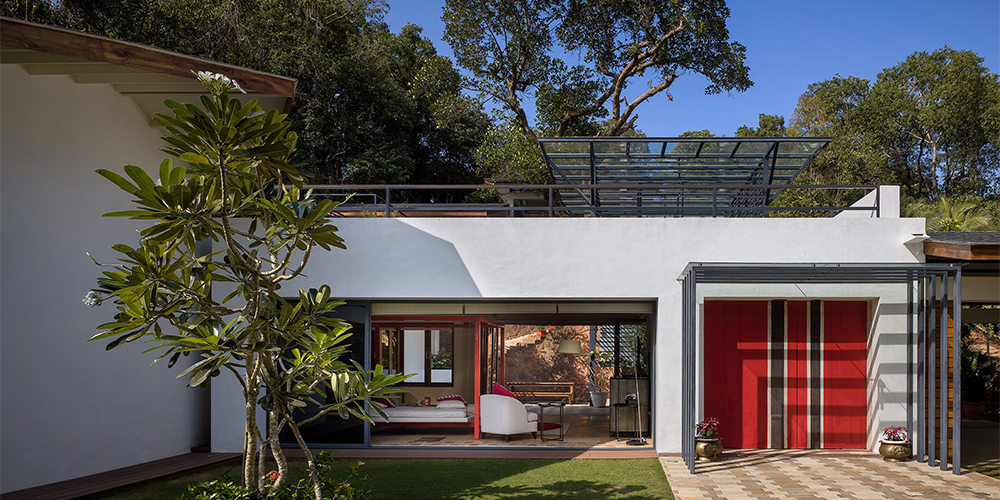 The villa is built by Aadil Salim such that it seamless transitions from the outdoors to the indoors; Photograph by Harshan Thompson 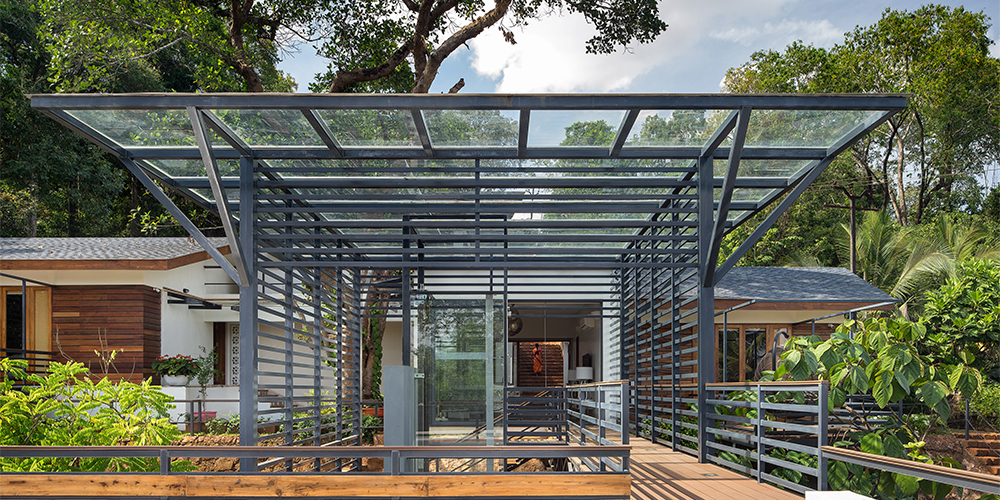 The glass roof at the rear of the house can be viewed in entirety from the upper deck; Photograph by Harshan Thompson 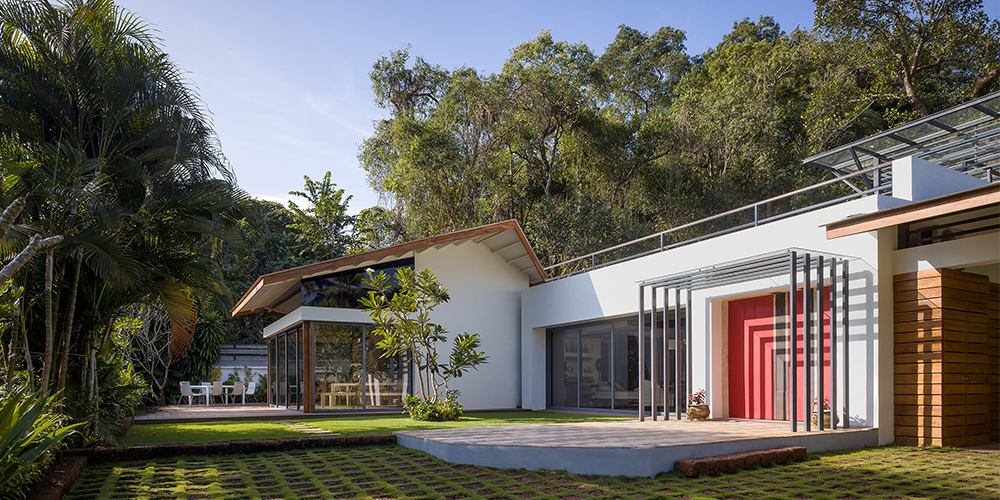 View of the home that Salim has christened the 'split level courtyard'; Photographs by Harshan Thompson 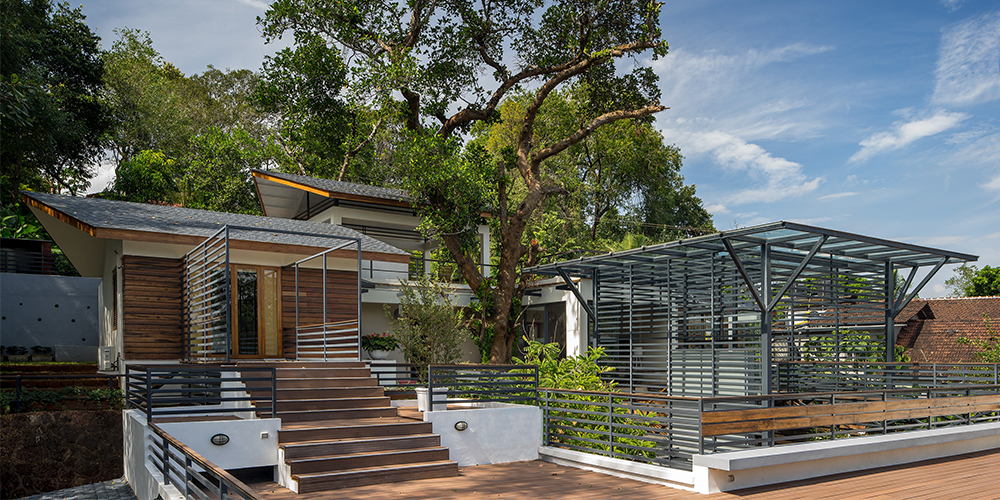 Reclaimed wood is used to clad the exteriors of the bedroom units; Photograph by Harshan Thompson 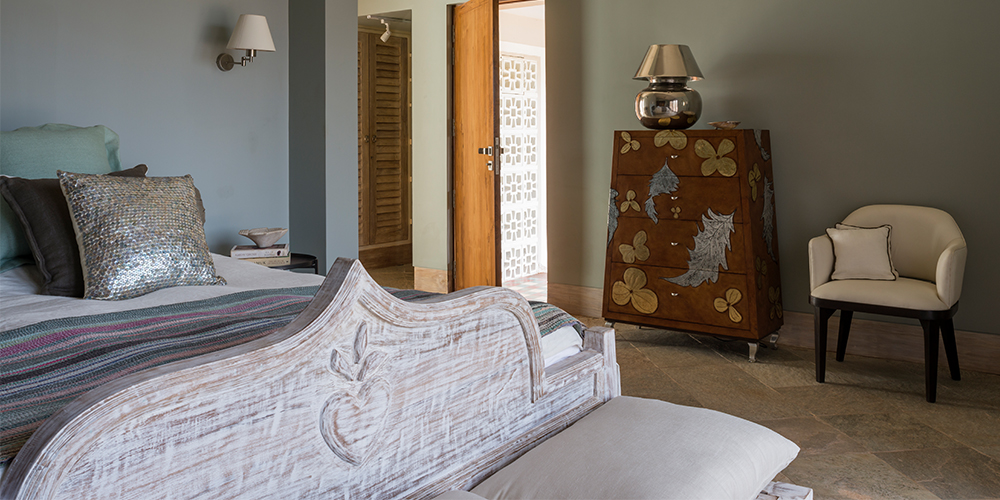 The custom master bed by Alice von Baum is paired with a leather chest and chair by PortsideCafé. Also seen are products from Abaca, Simon Hayward and an old kantha quilt from Jaipur; Photograph by Andreas von Einsiedel 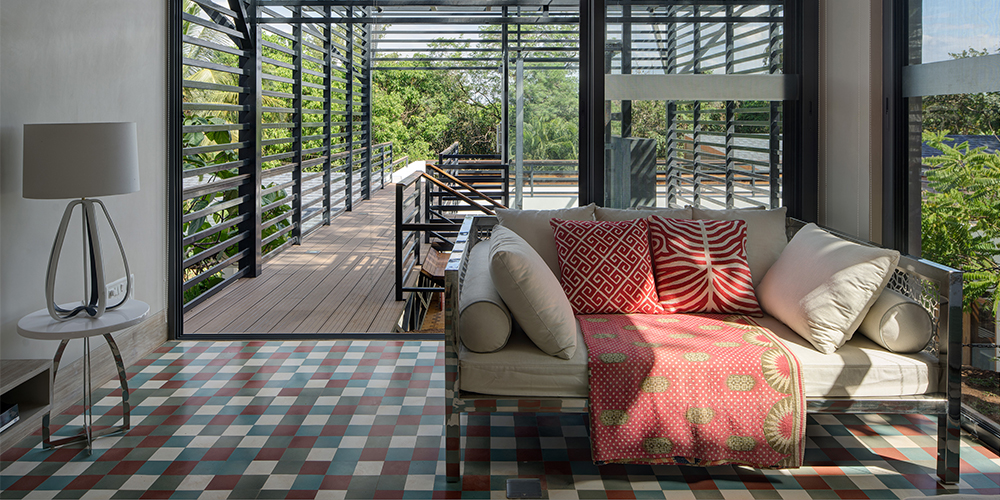 An artwork and the lush lawn enliven the minimal dining section; Photograph by Harshan Thompson The coffee table and upholstery for chairs for this lounge are from Good Earth, while all other soft furnishings are from Habitat Goa. The customised daybed, perforated metal lamps and leather lamps are from Abaca; Photograph by Andreas von Einsiedel On the stone floor from Jaipur is a vibrant, framed daybed from Le Mill, paired with armchairs and cushions from Abaca. In the background are ancient masks from south India that have been placed on stands by von Baum; Photograph by Andreas von Einsiedel 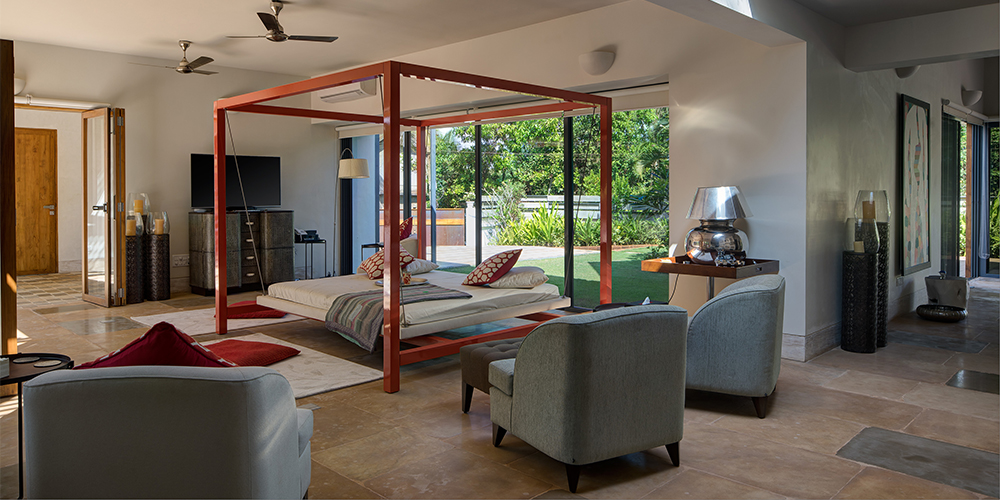 Another view of the main lounge; Photograph by Harshan Thompson 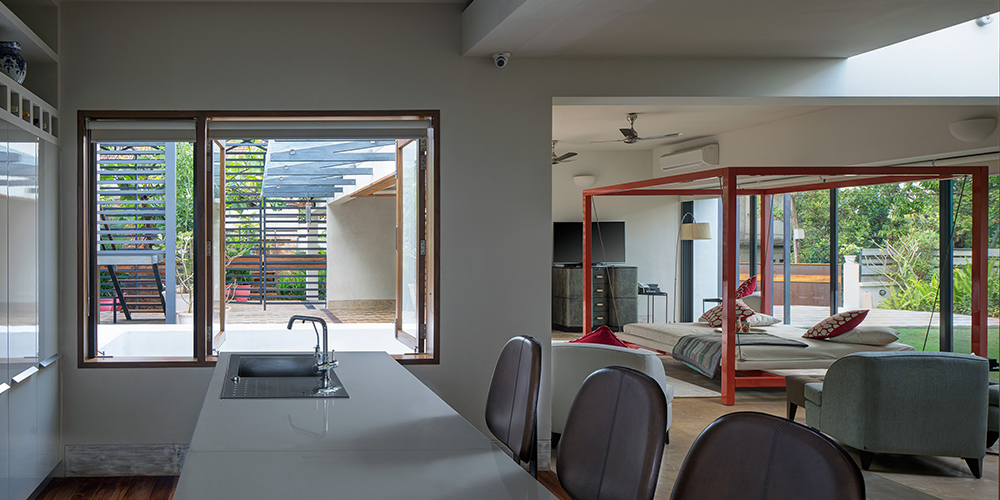 The bathrooms are bathed in natural light with the help of skylights; Photograph by Harshan Thompson The villa is sight for sore eyes, especially at dusk; Photograph by Harshan Thompson

When two creative personalities combine their distinct aesthetic styles, the result is bound to be spellbinding. Such an opportunity presented itself to interior designer Alice von Baum and Aadil Salim, founder of architectural studio Rubber Soul, who fashioned this nearly 5,400 sq ft villa in the quaint village of Bardez, Goa. The resultant residence is an amalgamation of both the creatives’ design ideologies as well as the client’s brief.

Salim shaped the abode, keeping in mind Goa’s humid, coastal climate. Walls were kept white and summery, while the roofs were fitted with tropical blue shingles. “At Rubber Soul, we like to design buildings with context to their time of construction, place and cultural setting. And, with this project, we wanted to create a space that allows its occupants to take the external surroundings within the modern comforts of their home,” he shares.

On the other hand, von Baum focussed on the detailing and hand finishes, and employed an eclectic mix of different styles and epochs for the textile decor and furnishings. She explains, “My driving force was to counterbalance Salim’s modern and masculine design by underlining and bringing out the exciting and more intricate, internal structures.”

To accommodate the slope of the hill on which the abode is located, the base of the structure is naturally divided into two levels. A 3m-high laterite wall runs along the breadth of property highlighting this dip. Without cutting down any of the existing trees and with zero site disturbances, Rubber Soul fashioned a sustainable abode using locally available materials such as laterite.

Other longstanding features included a fig and jackfruit tree, which eventually shaped the split-level courtyard—the core of the home. This space is secured by a metal cage that functions as louvres and helps establish a visual connection with the outdoors. Also used as a passive cooling strategy, the courtyard keeps the ambient temperature cooler.

The house follows a linear planned with huge openings on either side for cross ventilation and overhangs for protection from excessive sunlight and rainfall. The exteriors of the abode are predominantly neutral and insulated with customised 12mm-thick polyethylene sheets that line its sloping roofs. To complement these surfaces and keep interiors cool, all the bedrooms are also use recycled wood.

The lower level comprises the living and dining area, which open out to the front garden and deck on the east, and the courtyard on the west. At the rear is a staircase and a glass lift under a glass roof. This is an integral part of this courtyard as it offers unobstructed views of the trees and the sky.

Different shades of hand beveled stones from Rajasthan are used as flooring in the living room and courtyard, providing a generous visual expansion to the space. “Floors for me are key because they provide literally the foundation for any design, which is why I put tremendous thought and effort into crafting them,” shares von Baum, who was assisted by designer Dishaa Saigal on this project.

The upper level comprises two large wooden decks connected by a wooden bridge—one houses a television lounge, while the other serves as a landscaped pavilion. A nearby jackfruit tree looms over the bedrooms on this floor. We love how the boudoirs also open out to the wooden decks, providing serene views of paddy fields to the east and letting in constant breeze (even when closed) through louvered wooden shutters.

Each bedroom is tastefully done up with an individualistic style. Take, for example, the master suite, which features icy whites, inspired by the Himalayas. Even the bespoke bed linen fits in with its silvery shades. These were offset with eclectic pieces including a handmade, leather covered chest of drawers with gold accents from Delhi.

The daughter’s bedroom adorns a soft rose and pink canvas with a contrast of greens for the furnishings. These hues are inspired from the flora outside and depict growth as well as gentleness. On the other end of the spectrum is the guest bedroom, which has an industrial vibe with cement walls and stainless steel mosaic tiles, and accessorised with silver trunks.

Leaving no stone unturned, the creatives also spruced each bathroom with private secluded courtyards holding planters to give one a feeling of being in the tropics. It is the balanced use of these materials that brings the whole house together seamlessly.