; 5 Groundbreaking artists that we loved in 2018

5 Groundbreaking artists that we loved in 2018 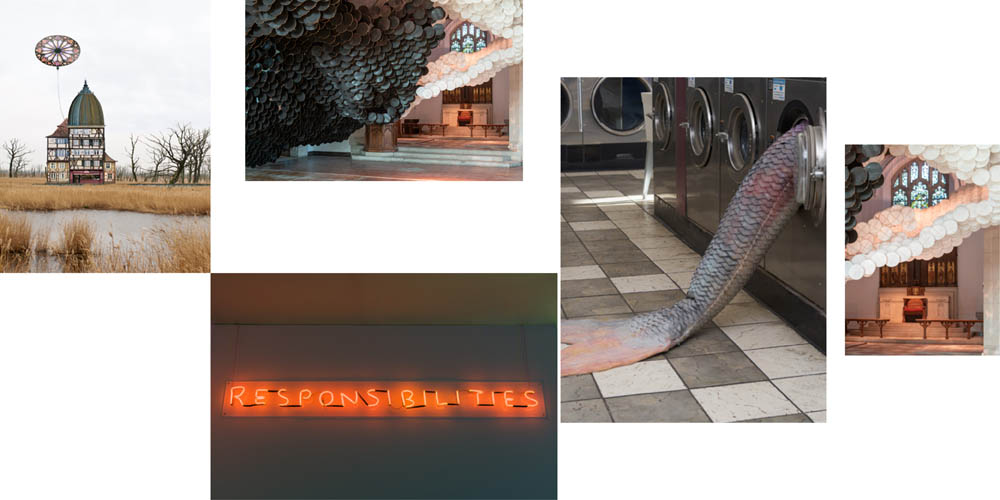 As 2018 draws to a close, we are still reeling over the surge of new artists, re-inspired by some of the classics – inspired much? We have rounded up our favourite internationally acclaimed artists and their latest installations that will transport you into a whimsical destination.

1. Surreale Architecture by Matthias Jung: It all started with just a tiny kit of elementary stationery — a little bit of glue, a pair of nifty scissors and then voila! The story of fantastic structures began. Matthias Jung’s fascination with art and photography collage began since he was a child when he would help out at his father’s photo lab. In early 2015, the German artist and graphic designer created a series named Houses. Some of the background images were taken by photographer, journalist and dear friend, Oliver Abraham. Over a period of time, the digital realm made processing work easier. However, he wanted to create an illusion of realistic landscapes and flying houses. “The composition of the individual elements correlates to a logic, as if in a dream. Basically, dreams are collages,” he says. Thus, the relationship between order/disorder and homogeneity/diversity must agree. Using real photographs taken on trips and taking into account design rules he creates these buildings that although stable, incorporate a certain disorder. Website: www.zabadu.de

2. Laundry Zone by Olivia Erlanger: Imagine, it’s another dull day and you’re at the laundromat getting your chores done until you come across life-size mermaid tails protruding from the washing machine. As your face is going through a gamut of expressions, there’s only one question on your mind, “How did it get there?” Olivia Erlanger’s installation at the Laundry Zone in a Mid City neighbourhood, Los Angeles was organized by gallery and art platform Mother Culture, which is based a few blocks from the laundromat. Founders – Milo Conroy and Jared Madere suggested using the laundromat rather than a gallery space which turned out to be quite effective as her reasons go beyond that meet the eyes. “Mermaids are a kind of pre-gender or genderless archetype, a representation of a chimeric existence that I feel we each take on as different environmental pressures effect transformation. Even though they are presented as females, mermaids bring up many questions of mobility, not only in a physical sense but also ones around the agency,” she concludes. Website: www.oliviaerlanger.com

3. Neons by David Shrigley: This year at Frieze Art, London, the Stephen Friedman Gallery took a different approach by presenting the work of the British artist in the form of a shopfront display. This time around, David has created five new, large-scale neons that showcase his vibrant yet dark sense of humour. His work may appear to be simple but there’s a lot that goes into it. Rendered in his distinctive handwriting, the neons were installed in shop windows visible from the outside, he has drawn inspiration from street signs and advertisements, undermining their authority in society. Website: www.davidshrigley.com

4. The Eclipse by Jacob Hashimoto: Jacob Hashimoto presents his first major art installation in Lower Manhattan, New York City. The New- York-based artist is known for creating complex, layered and immersive installations from a range of materials such as kites, model boats and wooden blocks. ‘The Eclipse’ provides a contemplative reprieve from the frenetic energy of the city. This colossal work transforms the interior of St. Cornelius Chapel of Governors Island with over 15,000 delicate bamboo and paper kites giving an effect of passing clouds in the chapel. Handcrafted art is his core practice and his expansive body of work is deeply rooted in art historical traditions of landscape-based abstraction, design and modernism. Website: www.jacobhashimoto.com

5. YAKAZA by Kerim Dundar: New Age Digital artist and founder of YAKAZA creates an eye-opening project titled Tribal Transmorph featuring ethno-futuristic patterns that vary on three different continents such as South America, South Africa, and East Asia. The works transition into organic patterns and forms, designed with an algorithmic morphogenesis process inspired by the digital nature, for a time when human endeavours will be successful at taking over the role of mother nature at an uncontrollable speed. YAKAZA is a reflection of an ethno-futuristic and diverse visual culture for mankind that constantly seeks an individuality and ‘unique’ identity for their presence in the reel and real realm. Instagram: @ _kerimdundar