; 080 Lounge in International Airport Bengaluru is a pitstop of luxury

The art of travelling—080 Lounge in Kempegowda International Airport Bengaluru sketches an enthralling, novel pitstop of leisure, luxury and design 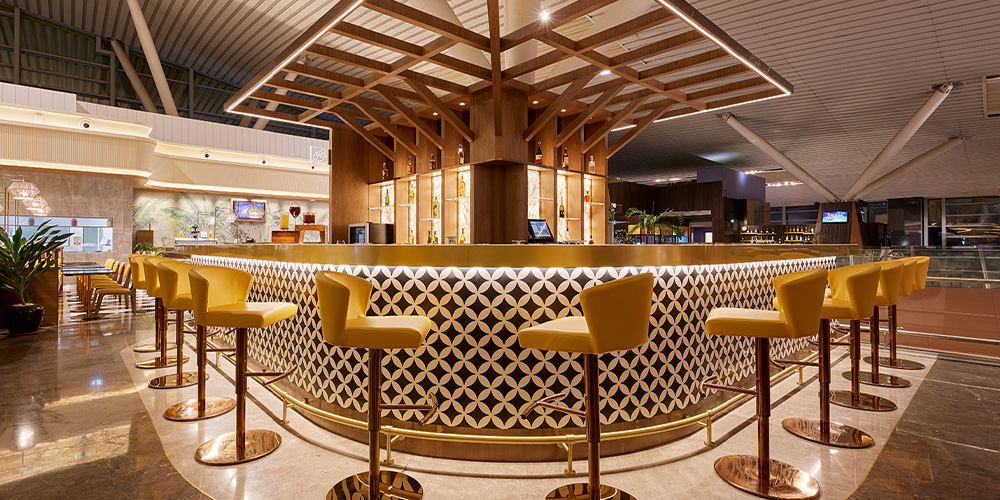 The Lounge Bar at the Domestic 080 Lounge; Photograph courtesy 080 Lounge 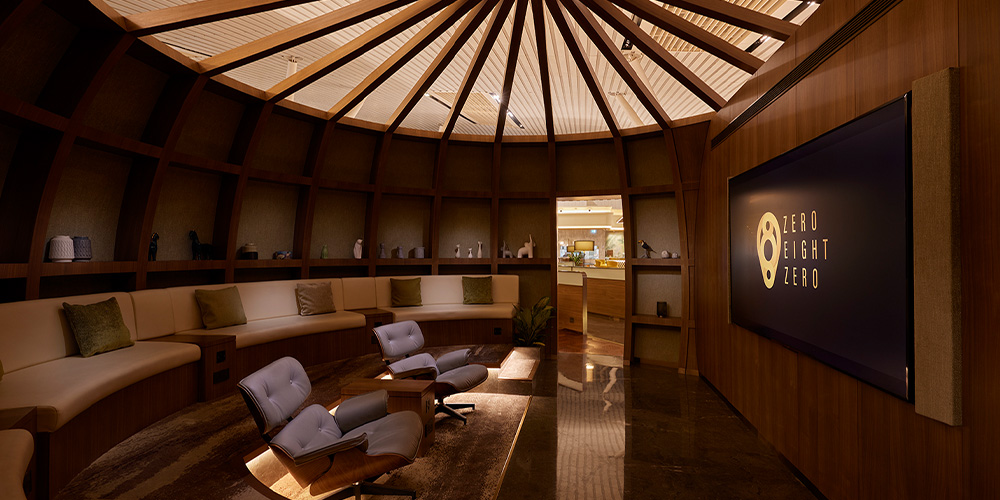 That’s the thing about travelling, it is far more than just making it to point B from point A. Travelling is eclectic and experiential, especially when it includes an airport and a lounge that poses as a befitting pitstop for the well-travelled who love a good reason to recharge, lay back or even get some business done while on the move. Add a generous dash of perceptive design and architectural intentions to this and the novel 080 Lounge in Bengaluru’s Kempegowda International Airport (BLR Airport) comes first to mind.

080 Lounge in Bengaluru Airport operated by Travel Food Services (TFS) opened just a few months ago this year and has since been heralded as a design and luxury-forward project in India that encompasses more than the requisites.

Sectioned as two distinct domestic and international zones, under the purview of 080 Lounge, the design was developed to completion by ABM’s Alfaz Miller and Aahana Miller (for domestic) and Payal Khanna of Aura Dezyne (for international) in close coordination with Bangalore International Airport Limited (BIAL). The venue exemplifies the new age of public spaces that regales its modern-day users with an evolved way of experiencing comfort in the community. At one glance, a few adjectives that unfurl are mindfully opulent, expansive and all-inclusive. 080, christened so after the trunk dial code of the city, in many instances mirrors the influences of Bengaluru, its heritage and the vibrant spirit of life.

Inside the Domestic 080 Lounge

Sprawling a grand 40,000 sq ft area, the domestic lounge materialised into reality by ABM coalesces contemporary with ease. Right from its entrance, the lounge wraps around a sense of fluidity, where conspicuous curves and symmetrical elements lead you in and out seamlessly. Alfaz and Aahana divulge, “There are 12 well-curated spaces, each designed meticulously to meet a unique requirement by the user, offering a multitude of experiences.” They add, “The material palette chosen reflects the dynamism and ever-evolving nature of Bengaluru and fuses it with the serenity of the botanical gardens.”

As you stroll through the many areas of this particular lounge, a refined canvas of neutral and earthy colours unveils, offset by hints of metallic, bronze, warm wooden and plush velvety details.

Laying out distinct zones for entertainment, quiet leisure and even indulging in sublime spirits and cocktails – sections at the domestic 080 lounge include a whiskey lounge, reading library, a cinema pod, dining area, VIP lounge and a niche boutique day hotel connected with the lounge itself. Pouring equal portions of design and wit, the ‘fire lounge’ is in fact the most outstanding for Alfaz and Aahana.

Replacing a traditional fireplace, this area is decked with a sculptural art installation mimicking its apt visuals. “To design and execute this was a challenge. But after several mockups, ABM was successful in implementing the design.” Skirted by plush, curvaceous sofas, the fireplace rests in the centre, highlighted by lit-up rings tethered around the central pole.

And while the walls and interiors here speak of a truly elevated language of design and function, what emerges as another high point is the frequent appearance of lush greens, vivid artworks by artist Brinda Miller and many photographs that unfurl the history and culture of Karnataka.

Inside the international 080 Lounge

On the other end of the airport is the international 080 lounge imagined by Aura Dezyne, transpiring facets of extravagance in the very core of the space. Helmed by Payal Khanna, her utmost aim was to create a mood within the lounge that stays with the travellers even after they have left the space. The design story was to bring alive the  flora and fauna of the city in a way that spells modern luxury for the well-heeled travellers.

As a meandering walkway leads one inside, a mesmerising light installation by Klove Studio draws the eye!

Diligently divided into many zones, just like the domestic lounge, the spaces here reveal a dedicated, elaborate spa room, lounge area, a stunning whiskey bar and a specially delineated area for VVIPs hosting an exhaustive wine library along with a second bar area embellished with an intricate light installation on its roof. Called ‘Boondh’ the lighting mimics the city’s dew drops in an enthralling way.

Payal further muses, “The one space at 080 that stands out to me is the Welcome Suite. I just love the forest theme in the terminal. It is a new, trendy concept that aims at introducing a better way of creating a green space and giving the traveller a true essence of the garden city.”

Cocooned inside the BLR Airport, 080 Lounge stands as an inviting and equally integral statement of why and how it may now be the right time to augment the concept of building and designing airport lounges in India as a crucial public space and reintroduce its status to the flyers as the destination to experience before they arrive to the next one!

You may also like: An address in Bengaluru that evokes luxury and exclusivity of modern living – Century Ethos