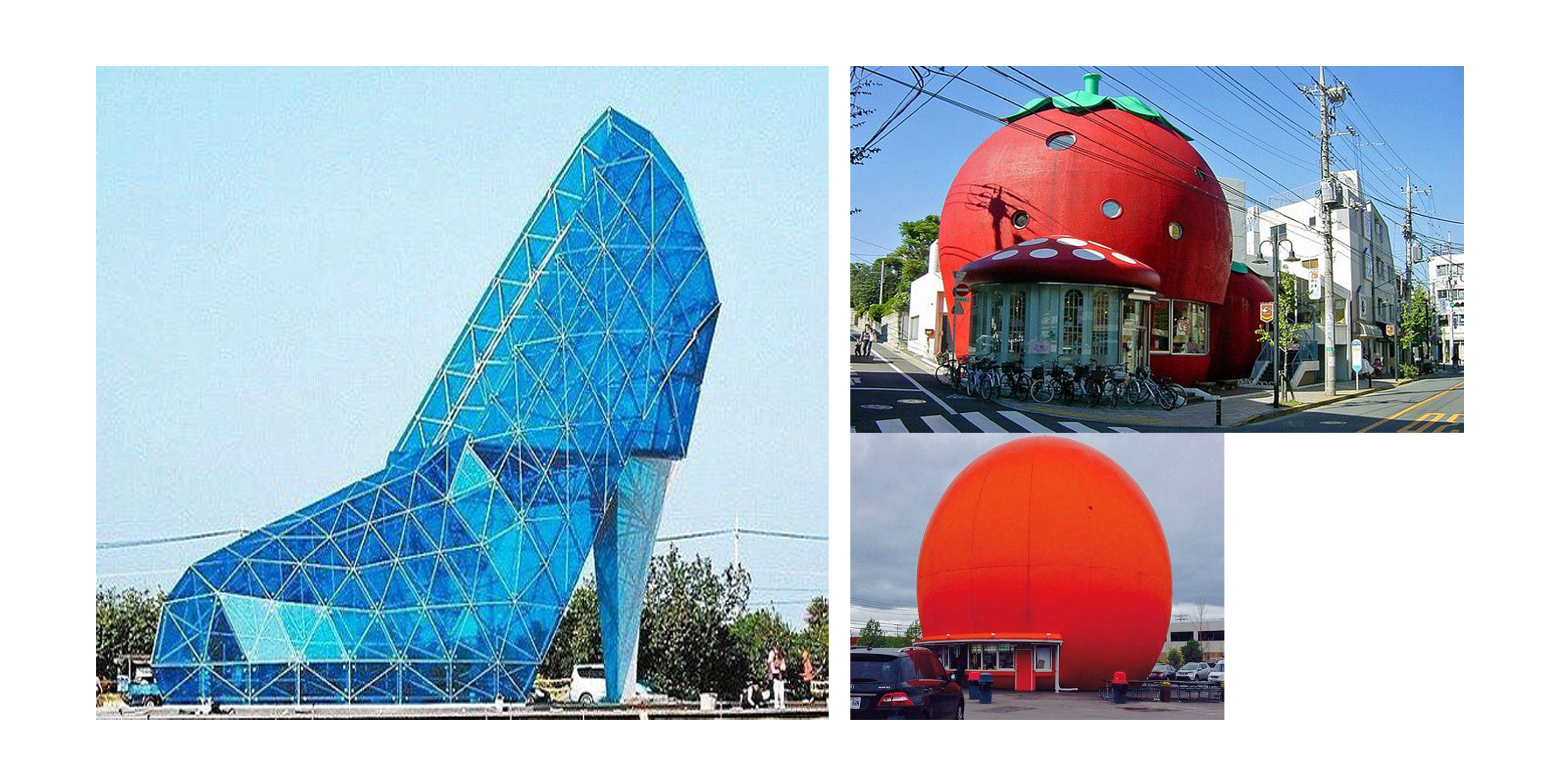 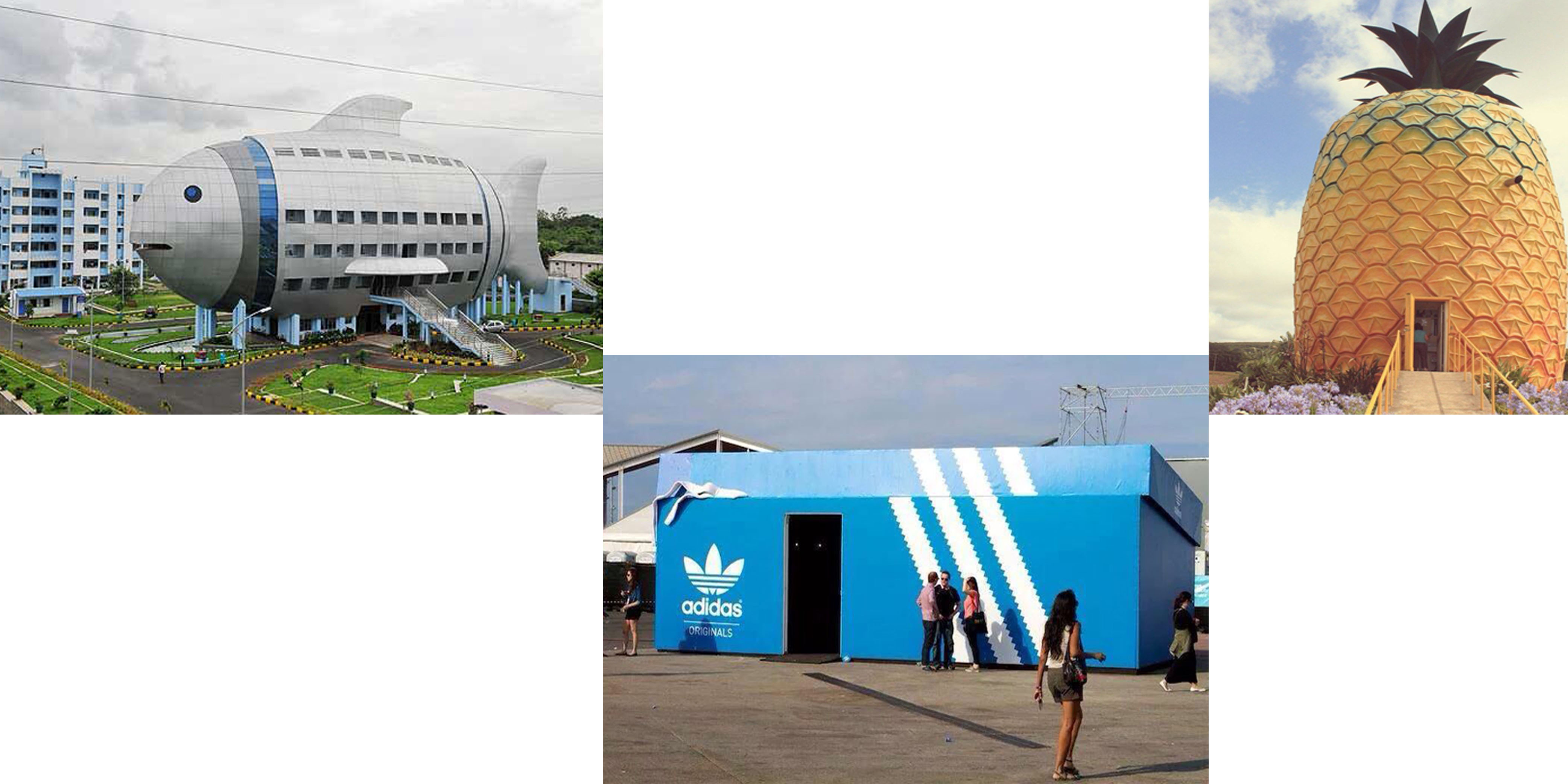 Imitation is the best form of flattery and in the case of these quirky installations rightfully so. Novelty Architecture has given rise to some of the most unusual yet visually stunning structures around the world. These buildings are shaped like the products they cater their services to, creating a brand new approach to the world of architecture. The Big Pineapple, Bathurst, Eastern Cape, South AfricaNestled in the city of Bathurst, South Africa, The Big Pineapple stands 56 feet tall and is the world’s largest pineapple building. This structure was crafted to emulate the tropical fruit—to pay tribute to the fruit and the sweet earnings it brought. The structure hosts three floors and is made of metal and fibreglass and features an observation platform. The interior brandishes a tourist shop and a great view.Adidas Shoe Box, Barcelona, SpainPop-up stores are all the rage and Adidas harmonized the trend almost perfectly. The Adidas Originals Pop-up shop at the primavera music festival in Barcelona, Spain was definitely a star attraction. The footwear company modelled a shoebox structure with a partly opened lid for its latest pop-up store. The store was detailed to the tee with everything ranging from the information of the shoe on the side of the ‘shoebox’ to a couple of laces peaking from the roof, definitely our favourite!National Fisheries Development Board Building, Hyderabad IndiaThe National Fisheries Development Board Building in Hyderabad India is quite the paradox to your mundane government offices. Crafted in 2012, the giant fish-shaped building appears to float mid-air and hosts three floors. The 1,920-square-meter structure was designed this way by the Central Public Works Department of India to promote all work related to fishing. The building features rectangular scale-like windows that perforate its silver body, a hollow mouth and eyes that bear blue glass.Gibeau Orange Julep, CanadaThe Montreal skyline hosts an unusual silhouette of an orange shaped structure. The Gibeau Orange Julep in Canada that stands tall at 3 stories and 40 feet wide was originally a snack bar with off the wall beverages. Crafted by Hermas Gibeau in 1932, the eatery and the staple orange julep drink is named after himself. According to the Montreal Gazette, the city’s main English language newspaper, The Gibeau, is among the ‘Top Ten Most Important Montreal Symbols’ Today, it is one of the oldest and most iconic fast-food joints in the country.High-Heel Wedding Church (Budai Township, Taiwan)Located at Ocean View Park, in Taiwan’s Budai township, on a large concrete disc stands a massive glass slipper that looks like its straight out of Cinderella’s fairytale. However, in reality, this unique structure is a church that caters to women. Built in 2016, the edifice has 320 blue-tinted panes, set into a metal grid. The female-centric decor embodies love seat benches, biscuits and cakes, and maple leaf decorations. The building is also used for weddings and photoshoots. Sanrio Strawberry House (Tokyo, Japan)Built in 1984, Sanrio Strawberry House was one of Tokyo’s oldest shopping centres for children. This structure is spun on two sides by a smaller strawberry on one and a mushroom on the other. The three-storied structure houses Sanrio merchandise on the first two levels and the third level is a strawberry themed playroom to the tee with strawberry-shaped tables to fixtures. This store was a door to a world of fantasy where kids can frolic in strawberry fields.